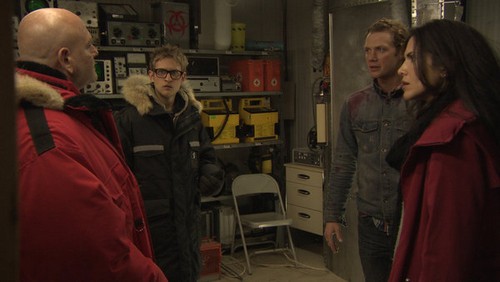 NBC SIBERIA continues tonight with a new episode called, “Strange Bedfellows.” On tonight’s show they find unsettling evidence of strange and deadly experiments that have been conducted there and may well be ongoing with them as the subjects. Did you watch last week’s episode? We did and we recapped it for you, right here.

On last week’s show (Joyce Giraud), Daniel (Daniel David Sutton), Sam (Sam Dobbins)and Johnny (Johnny Wactor) looked for power at the research station and made a horrifying and grisly discovery. Meanwhile back at the cabins, one of the missing contestants returned with a story that shocked Sabina (Sabina Akhmedova) and Neeko (Neeko O.J. Skervin) and forced them to take defensive action, including a renewed search for the missing rifle. The distance and separation between the groups became more stark as the settlers faced starvation and attacks by unseen forces, while the group at the research station enjoyed relative comfort and learned more about the mysterious history of the Siberian wilderness.

On tonight’s show Neeko (Neeko O.J. Skervin), Miljan (Miljan Milosevic) and Sabina (Sabina Akhmedova) are abducted by a hostile local tribe and fearing for their lives make a surprising discovery at natives’ camp. Meanwhile, Joyce (Joyce Giraud), Sam (Sam Dobbins), Johnny (John Wactor) and Daniel (Daniel David Sutton) are desperate to find a way to communicate with the world outside the research station and in the process find unsettling evidence of strange and deadly experiments that have been conducted there and may well be ongoing with them as the subjects. Also starring Esther Anderson, Irene Yee, Anne-Marie Mueschke.

Tonight’s episode 10 of Siberia is going to be an exciting one that you won’t want to miss, so be sure to tune in for our live coverage of NBC’s Siberia at 10 PM EST! While you wait for our recap hit the comments and let us know what you think of Siberia season 1.  Enjoy the show.

Daniel is feeling defeated. Just as everyone got their hopes last week of being “rescued” they found someone or something had sabotaged the beacon. Daniel is finally having enough and he’s prepared to give up but Joyce talks him into continuing on.

He and Sam create a combination of brains and brawn decide to find a way to repair the beacon. Luckily Mr. Know-it-all has figured out how to get a signal again. Daniel is going to attempt the sophisticated “loop” in order to send for help. While the rest of the team namely Joyce and Johnny are stalking up on supplies again when Joyce hears something from inside the buiding. She thinks it’s the bird and want to go and save it. Johnny isn’t as enthused . He want to leave that experiment in a cage away from them. As they’re looking in the clinic though Johnny spies another Dr. Who Mystery Box.

Neeko, Sabina, and Miljan are still alive. They’ve merely taken prisoner by the Eskimo. However once they get to the enemy camp they’re put in a tent with Anne Marie and Esther. The two women were kidnapped as well. Although they did see Irene. She was taken to a different tent and except for the first time the two women haven’t seen her since.

Neeko is frustrated so he goes out and demands answers. One of the clanswomen luckily knows English. She tells them her people tried to warn his group but they did not listen. This trespassed and now they must be punished.

That didn’t go well but at least Sabina found herself an ally. The little girl from the ring is back. Except now she’s clothed for winter and is able to speak English. Her name is Sasha. After the shaman has revealed that stranger shouldn’t be there, the tribe decides to take the foreigner into the village of the white man. Catchy name.
Before they go they have to get Irene. Her leg is “magically” healed and even though her leg was supposedly speared like a kabob, she’s well enough to travel. Now all they have to worry about is Big Bird. It attacked one of clansman.

Back at the station Johnny and Joyce were freaked out by the box. Daniel had explained that it probably worked like an experiment. Meaning when they did well the box would reward them. Sam doesn’t want to divert attention from the beacon though and tells everyone to get back to work.

Johnny returns to helping but now he has a temper. The only person to take it out on is Joyce. He wants to know why her friends (the producers have left). It seems backtracking forgiving her because he’s also upset that she targeted him as part of her job. It’s only once he reduces her to tears does he lay off and tries to get something else off.

Sam interrupts their make out session to inform them Daniel got injured. He fell of the beacon. With the other guys’ help they complete fixing the beacon. Their signal is spotty but they do have one.

The next morning, those at the enemy camp are given escort back to their camp where they gather all of their supplies. They had only recently found out about the cursed creatures when they accidentally wondered into it’s territory.

The tribe no longer want to take them the whole way. They drop of the contestant to a day’s walk to the village. They aren’t given weapons but they do get an apology. They’re on their own.

The other contestant at the station got a response to their signal. The cameraman is finally making himself useful by shockingly knowing Russian all of a sudden. But is he people they’re talking possible friends or foes?