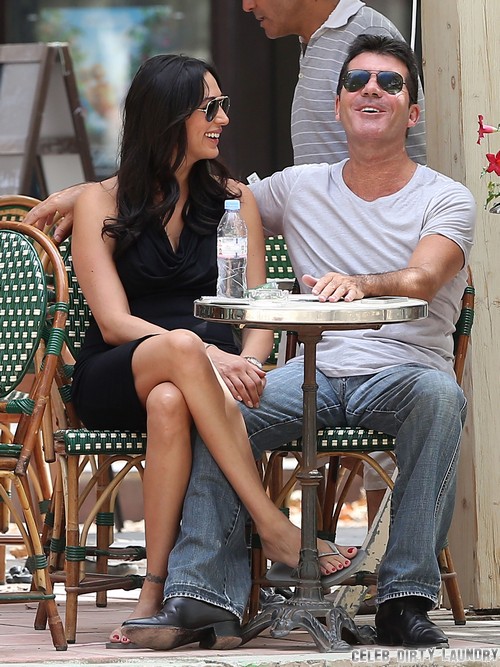 Don’t be mad because Lauren Silverman can suck an elephant through a water hose. Just a few days after her divorce from Andrew Silverman was finalized, Lauren flew into London with her decrepit baby daddy, Simon Cowell. Their weighty public affection confirmed the relationship status to the world. Some even say he introduced lucky Lauren to his mum.

Now that the Botoxed billionaire is expecting his first child, tongues are wagging liking Miley’s (Cyrus) wondering if the X Factor villain intends to marry. In the same voice he uses to slam the dreams of aspiring singers, he said, “She’s a very special girl. Things are changing in my life right now, for the better.” That’s a far cry from the old Simon, who complained of being, “too selfish and too much of a workaholic” to eat spaghetti everyday.

Fellow X Factor judge, and Cowell’s bestie, Louis Walsh, admitted, “Simon has the baby and may be getting married next year. I think it’s a possibility. He is old-fashioned. And he is getting old. He is 53 now!” Before you get too happy, too soon Walsh added a back handed compliment, “I’m friends with Lauren. She’s lovely. I’ve even touched the bump. I love all of Simon’s girlfriends. He is what he is. I wouldn’t be here if it wasn’t for him.” Did he have to say, “all of Simon’s girlfriends”?

Will a baby pressure Simon Cowell to marry a certified “star fu**er” who embarrassed her husband by becoming pregnant by another man? Out of all the gorgeous girls Simon has tossed like salad, where did Lauren Silverman learn to clench her kegals with such ferociousness? Simon can have any girl he wants. Certainly he’s stuffed his London broiler down Nicole Scherzinger’s gorgeous throat (at least once), but will he eventually settle down? What will happen if Lauren meets another rich guy who has more celebrity than Simon? What if he’s younger than Simon?