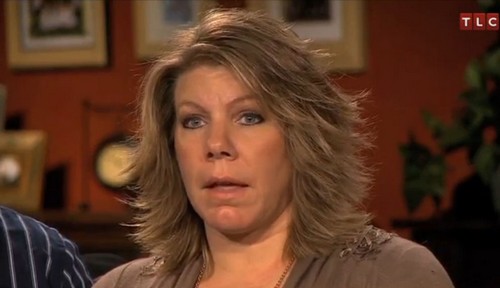 Have you ever watched Sister Wive’s on TLC and wondered why the heck four women choose to live as a family with polygamist, Kody Brown? It’s kind of baffling isn’t it? Well recently Meri Brown – the only woman legally married to Kody spoke out about their living arrangement and admitted that she’s not exactly happy with Kody’s other women.

According to the Aug. 19th print edition of GLOBE Magazine, Meri admits to being jealous of her husband’s intimacy with his other wives. She claims that jealousy is a natural emotion and that the bigger issue is how to look past it to see the good. Huh? I agree that it’s completely normal to be jealous when your husband of 17 years is flaunting his relationship with not one, but three other women right in your face, but why choose to stay in that type of situation?

If you’ve suffered through the show at all then you’ve already seen that Meri’s misery comes through on camera loud and clear. It’s obvious that this extended family arrangement was certainly not her idea, but why the hell has she decided to accept it and live within it? Meri is the most disgruntled of the group with the fact that Kody added a fourth, younger, prettier and skinnier wife. Meri even tried to tell Kody how it makes her feel to see him with his new wife Robyn, but he wasn’t listening so how long will it be before Meri walks away completely?

Ironically, when Kody was asked if it would be okay for any of his wives to take a second husband he was absolutely repulsed by the idea. Talk about a nifty double standard! I’m surprised that this polygamist family hasn’t already crumbled under the glare of reality TV aren’t you? Tell us your thoughts in the comments below!