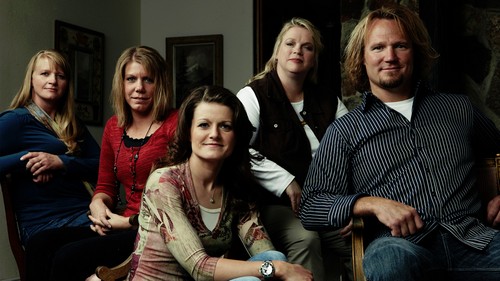 Tonight on TLC the Brown Family returns with a new episode of SISTER WIVES called, “Odd Wife Out”  On tonight’s show one major hurdle still remains for all the sister wives — closing on their mortgages.  Did you watch last week’s episode?  We did and we recapped it here for you.

On last week’s episode it focused on the Brown families goal of being in all four houses by Christmas, snags in the building process threaten to ruin the Brown’s dream. Meanwhile, Aspyn and Mariah discussed college plans. And one wife decided to possibly jump ship on the family business.

On tonight’s show with builders putting the finishing touches on their new homes, one major hurdle still remains for all of them — closing on their mortgages? Will all four wives be able to afford their new home or will one of them be left with tears of disappointment?  Tonight we will get a first look at Robyn and Christine’s new homes.

We will be covering Sister Wives Season 4 Episode 4 tonight at 9 PM EST so don’t forget to come back to this site for our full and detailed recap.  Make sure to refresh often to get the most recent details.  While you wait for the recap, let us know how excited you are about the new season of Sister Wives and check out a sneak peek of tonight’s episode below!

There’s a reason why most men stick with one spouse instead of four. Four wives bring nothing but four different problems and headaches. The houses are almost completed but some have finished their financing. The whole idea of being in by Christmas is slowly dying. The real estate agent Mona has already given up on the pipe dream.

Meanwhile the kids are excited. Ysabel couldn’t help mentioning that now her dad will be nearby. The long separation has affected the little ones. Probably more than the adults know.

Robyn on the other hand has a surprise for Kody. Not it’s not another baby. She’s actually legally changing her last name to Kody’s. She wanted to have his last name on the deed to her house. That’s his Christmas gift and this gift is going to need some extra cheer. Her older kids are spending the holiday with their dad.

That alone is going to be hard for her but it can all be turned around if she gets in her house by Christmas. Before Kody she stayed never in one place for long so the new house will technically be her first home. Her life pretty much was without any sort of plan prior to her polygamous marriage.

Another thing without a plan is the family meeting. The adults want to create a family mission statement. As if getting all their children to agree would be easy. It was chaos although the kids do come up with some of the kindest things. Will any of them continue being kind once they find out about their homes? They surely won’t be handing any parent of the year award.

Especially once Mariah finds out that Meri went to her house and continued making changes. Kody tried to reason with her yet Meri kept going and Christmas is literally around the corner. Now is the time for everyone to stop being fanciful.

Mona agrees. She calls in Kody and the wives. She wanted them to know who can and can’t get in their homes. It seems only one wife is getting her home in time. Janelle get her house first, then Robin, followed by Christine and coming in last is Meri. Apparently this one happiness she cannot share with her sister wives.

Janelle is not letting Meri’s unhappiness get her down. Her children have been acting out ever since the move and now that they have a home she’s hopeful her kids can only get better from here now that they can settle in one place. The same with Christine. She hadn’t been her usual cheerful self and Kody is hoping to see his third wife reemerge from the pessimistic woman he’s been living with.

To celebrate the finished house, their hosting a party at Janelle’s. The only person not being celebratory is Mariah. Like whiny little brat the teenager can’t get over that her own house isn’t finished. She remains with a sour face even as she sees her half-siblings eagerness at their new house.

Despite Mariah, the celebration goes on. Happily, Janelle got another surprise. Earlier she and Kody went bed shopping and Kody surprised by setting up the bed at the new house. That for them is romance. Like the contractor said Kody with Janelle is serious. Kody with Christine is jovial. Kody with Meri is calm. And Kody with Robyn is all love dovey honeymoon stage.

Robyn’s kids are leaving. Before they go Robyn wants to show her kids their new house. The kids are happy and they’re just about when they received word on Christine’s house. Robyn delays her trip in order to be there when Christine and kids view their house.

Christine, who wasn’t a big Robyn fan, was grateful that Robyn stayed and maybe with them getting along better she’ll go back to the fun one Kody was expecting. He’s going to need at least 3 ou of 4 to be happy.

Janelle , Kody’s pragmatic wife, has a romantic moment with Kody. They go mattress shopping. To anyone else this would be chore but Kody loves it. Who knew?