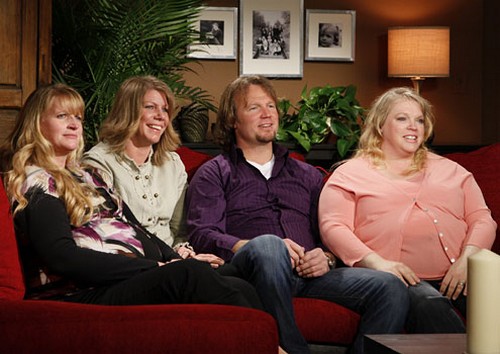 Tonight on TLC the Brown Family returns with a new episode of SISTER WIVES called, “Big Boy Panties!”  On tonight’s showSnags in the building process could ruin the Browns’ dream of being in all four houses by Christmas.  Did you watch last week’s premiere episode?  We did and we recapped it here for you.

On last week’s since leaving Utah, the wives have now settled into four separate lives. Janelle continues her weight-loss battle. Robyn fights to keep the family business afloat. Meri works hard to repair her relationship with Mariah and Christine rethinks her career.

On tonight’s showfocused on their goal of being in all four houses by Christmas, snags in the building process threaten to ruin the Brown’s dream. Meanwhile, Aspyn and Mariah discuss college plans. And one wife decides to possibly jump ship on the family business.

We will be covering Sister Wives Season 4 Episode 2 tonight at 9 PM EST so don’t forget to come back to this site for our full and detailed recap.  Make sure to refresh often to get the most recent details.  While you wait for the recap, let us know how excited you are about the new season of Sister Wives!

Christine has changed her tune. Ever since she found out the difficult market of real estate will take away from home too long. Now all the wives are trying to make Sister Wives’ Closet Work . Their only problem is Kody. He’s feeling left out.

Janelle’s has been having some setback with her weight loss. At first she was doing really well but her weight loss has appeared to stall. Luckily her trainer’s version of therapy is to take a hammer to her scale. She’s stronger than she was before and she now has the ability to run. Something she couldn’t do since elementary school so despite the scale Janelle needs to be happy.

The homes have been making wonderful progress. However they were warned that loans cannot be put in jeopardy no matter what. This is the end game. All that they should be worried about is their kids. The kids are looking at colleges.

Meri is having the most difficult time. Her daughter is an only child and her leaving will really make Meri an empty nester. The three of them (mom, dad, and daughter) drive back to Utah for a college visit. It’s been thrown around that their daughter should live in the old family home but Mariah doesn’t feel like its home anymore.

Yet there is an upside. The college visit goes well. They’re reassured that their faith won’t affect Mariah’s admission. Mariah is so excited about her new school and doesn’t even want to look at other schools. She’s not being stubborn though. She just wanted to be near their former church and so Kody doesn’t push her. He insteads takes Christine and their daughter to their college visit. Its Where Logan goes to school.

His kids have been having tough time since Kody revealed their lifestyle and his son Logan has been taking time at college to postpone any decision. That’s what a lot of Kody’s children are at. They’re simply in the thinking phase.

The wives continue doing exposes. They’re still some financial concerns and yet the women are optimistic… for now. That is before they brought in a college guru. He’s helping them with applying for scholarship.

Things like that and her mortgage has knocked out Janelle. She no longer is seeing the viability but surprisingly Christine sticks up for Robyn’s business and says she needs support in order to get the business off the ground. So Janelle goes as long. At least for the present but what about later.

Every time they have a setback someone tries to cut away. Who will be next?