Snooki Hates Being A Mother And Thinks Pregnancy Is Hell But Wants Another Baby – Stat! (VIDEO) 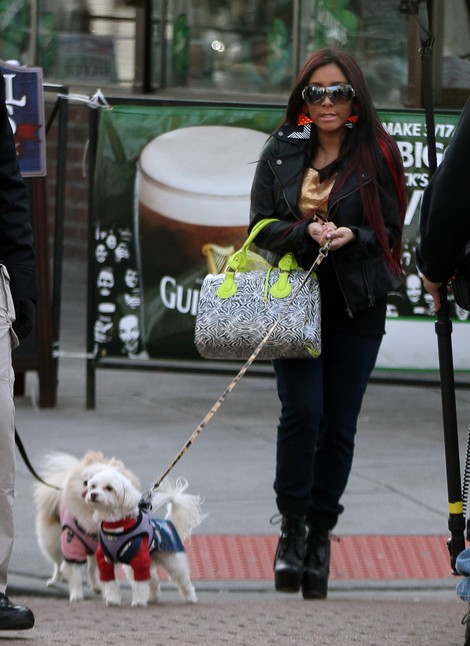 Pregnancy is HELL, so says Snooki … who tells us that the process of childbearing is much more disgusting than everyone makes it out to be. Many women look at childbearing as a beautiful experience which brings them the joys of life — children. The “Jersey Shore” star, whose real name is Nicole Polizzi has gone back to partying after giving birth to her son Lorenzo by Jionni LaVale. Could her partying ways be the reason for her displeasure with childbearing?

A stone-cold sober Snooki was just too boring and bored and who lets a little thing as child birth stand in the way of the party girl we’ve seen fist-pumping her way from one nightclub to the next. On Snooki & JWOWW we see a sloppy drunk, dancing wildly, and falling all over the place. Snooki made out with every woman with lips and there was serious smooching going on between Jenni “JWoww” Farley and Nicole “Snooki” Polizzi

When asked by TMZif she wanted another child Snooki stated, “Yeah, I want one right now, but it’s just not the right time,” Snooki said … adding, “We’re gonna try to plan this one.”

The right time is “code” for I am not ready to give up my partying ways. Another baby would   serious cramp Snooki hard partying ways.  Snooki fame was built on drinking, partying and going to clubs and one child will allow this be two kids will definitely halt the MTV reality star party ways.

The 4-foot-9 guidette looks significantly slimmer nowadays and the hell of pregnancy which included weight gain, no drinking and actually being mature at all times is why childbearing was disgusting.

Love is a power for change, if a person allows it, so will Snooki allow love to take over and have another baby? Has Snooki really matured or is the young starlet missing those hard partying way? You decide.