BY Cate Meighan on May 21, 2013 | Comments: 4 comments
Related : Reality TV, Recap, So You Think You Can Dance, Television 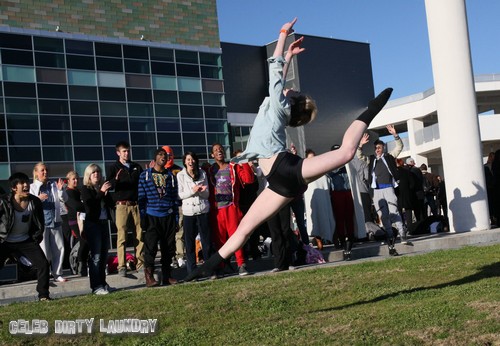 Tonight on FOX SO YOU THINK YOU CAN DANCE continues with a new episode.  On tonight’s show the second round of auditions are featured in the conclusion of the Season 10 opener.  Did you watch last night’s show?  We did and we recapped it HERE, for you!

On Last night’s show the Motor City got its engines revving as the So You Think You Can Dance audition tour continued with a stop in Detroit. Joining Nigel and Mary tonight for the first time at the judges’ table was the wildly popular Season 4 all-star Stephen “tWitch”  Apparently Detroit has its own dance style?  Host Cat Deeley spent some time learning about the Jit as dance hopeful Will “Sysko” Green showed the crowd and the judges his Jitting skills onstage.  On day one in Detroit eight more dancers are elevated to the next round.  On Day two in Detroit six other dancers were given their golden tickets to Vegas.

On tonight’s show it promises to hold more excitement, as actress Minnie Driver joins the judges for auditions.  We’re looking forward to more dancing, as we return home to L.A. before hitting the road for Texas as the search continues for America’s Favorite Dancer, so be sure to tune in with us.

So You Think You Can Dance Season 10 Auditions # 3 airs tonight at 9PM and you don’t want to miss the Dancers trying to impress the judges with their moves and rigorous routines in order to survive the auditions and be invited to Hollywood.  Celeb Dirty Laundry will be live blogging the show each week, so don’t forget to come back to this spot at 8PM EST for our live recap!

RECAP: SYTYCD is back tonight for two hours of auditions in grand style. This season already looks like it’s going to be pretty hot. Nicholas Stewart starts off the LA auditions with a style called flexing. It’s like a hip hop version of contortionism that made me and the judges all cringe. He gets pushed onto choreography.

Alex Kissinger is one of those packaged stories which means she’ll be good. She’s a pretty edgy contemporary dancer that the judges send straight to Vegas. Sebastian Serra has been with the Orlando ballet for three years and decided to crank out a piece set to music that sounded like it came from Stomp. He is a jumping bean and that quality pushed him through to Vegas

Misha and Maria are two Latin ballroom dancers from NYC that try to keep their relationship professional. They ended up on Mary Murphy’s hot tamale train the minute the music started. Of course they made it through to the Vegas round.

Phillip Cheebe was very popular several seasons ago and his roommate is now auditioning for the show. Emilio Dosal is pretty damn amazing with his pops, locks, tutting and everything else. Phillip taught him well and he’s really entertaining. He gets to prove himself in choreography.

Makenzie Dustman is a classical contemporary dancer that was pretty flawless so the whole judging panel loved her and pushed her to Vegas no questions asked.

Anthony J Freeze is only four years old and he got his first shot in front of the camera because he is ridiculously good. He has learned to dance by watching videos of SYTYCD alumni Cyrus and has a huge future in dance if he wants it. Hayley Herbet has the misfortune of following J Freeze but her contemporary routine is stunning and he is also headed for Vegas.

Dannon O’Brien’s family runs a haunted house and that has left him as obsessed with make up as he is with dance. He’s unique and really quirky and perhaps the only person to ever do a death scene on the SYTYCD stage. He has that extra something and will be heading to Vegas. Shane Garcia stutters really bad so he has spent much of his life finding other ways to express himself. He seems like a sweetheart and tells the judges that he began dancing to speak freely. His style is bone breaking and it was magic.
Daniela Bustillo is another of those packaged dancers that tells the harrowing story of being robbed with her family at age 8 and how it made her parents decide to move to the states. She’s a stunning contemporary dancer and makes it to the choreography round.

Nick Muckleroy takes the stage in his short shorts and baby oil and he is chill inducing. His leaps are way high and his choreography is brilliant. Hampton Williams is known as “The Exorcist” and he auditioned last year, narrowly missing the cut. He’s back again and this time he brought his family. He, the girlfriend and his four year old daughter all take the stage and do an amazeballs group routine that gets them all a ticket to Vegas. If you missed the show you’ll want to YouTube Hampton.

Next stop on SYTYCD’s audition tour will be Boston so tune in next week!