BY Dorothy Gale on August 6, 2013 | Comments: 2 comments
Related : Reality TV, Recap, So You Think You Can Dance, Television 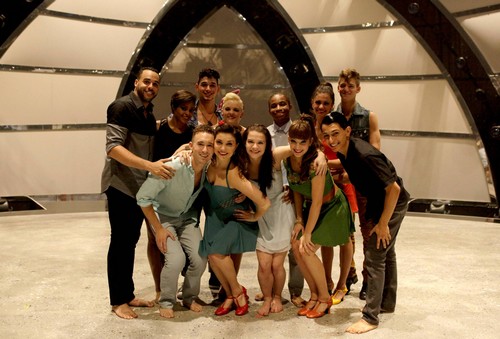 Tonight on FOX SO YOU THINK YOU CAN DANCE continues with a new episode. On tonight’s show as the remaining twelve talented finalists vie to win the nation’s votes in their quest to become America’s Favorite Dancers. Did you watch the last episode? We did and we recapped it HERE, for you!

On last week’s show the 14 talented dancers tried to win America’s votes and hearts in their quest to become America’s Favorite Dancers. The show openned with the remaining 14 dancers performing a number set to District 78’s “Dimman Kryper Sakta In.”  We also found out Tapper Curtis damaged his shoulder in rehearsals and will not be able to perform this week.  Joining Nigel and Mary at the judges’ table tonight was “Pitch Perfect” star Anna Kendrick.  By the end of the show they sent Tappers Curtis and Alexis home.

On tonight’s show the field will be whittled down to the Top 10 and the All-Stars will be revealed.   As always, the judges will make the final decision, but you still have the power to determine who will go on the chopping block next week as the bottom three guys and bottom three girls—so keep voting to save your favorites.

So You Think You Can Dance Season 11 Episode 13 airs tonight at 8PM and you don’t want to miss the reveal of the first live show of the season.  Celeb Dirty Laundry will be live blogging the show each week, so don’t forget to come back to this spot at 8PM EST for our live recap!

Nigel gets to choose someone to send right into the top ten, Nico and Jenna are sent. The four remaining are going to dance and show off their styles in solos. Tucker is up first, then Amy, then Malece and Alan is last; they all do very well.

Hayley and Nico are first to perform and they do a Broadway piece. Nigel loved it and says it deserved a standing ovation, great opening and one of the best Broadway routines they have had in the whole season; two of the lifts were fantastic. Mary thought the passion and the power that they brought into the character took her away.

Malece and Alan perform a Jazz number. Kenny thinks Malece has a sparkle like Goldie Hawn, he has been taken by her and loves them both as individual dancers, but he thought they lacked a chemistry. Nigel felt it was uncomfortable to watch, the style wasn’t there and the chemistry wasn’t there. Mary agrees there were issues, but it was entertaining.

Jenna performs the Paso Doble, joined by All Star Alex Wong. Mary thought it was good, no she loved it. Kenny thought Jenna did a great job, she attacked every move with confidence. Nigel loved the performance as well, Alex has never done ballroom.

Mackenzie and Paul do Contemporary. Nigel loved, it was amazing and he complaints them on their breathing. Mary thought it was another amazing routine, she loves what Mandy did and thought Mackenzie was a diamond up there. Kenny loved the piece, he says these two are his favorite dancers and Mackenzie deserves to be standing on that stage.

Amy and Fik-Shun perform the Viennese Waltz. Mary thought they were precious together, there were some technical issues but there is something special about the two of them together. Kenny loved them and thinks they are going to be there for a while. Nigel thought Fik-Shun was magnificent, it was beautiful and he will be disappointed if either goes home tonight.

Jasmine and Aaron are next. Kenny thought it was two smokin’ guns, unbelievable. Nigel thought Jasmine killed it and her hips were like Elvis. Mary loved it as well, perfect performance.

The girls perform, Mary calls the girls the best that they have had in ten seasons, there was no weak link. Kenny says it is an honor and a pleasure. Nigel says they have three amazing Canadian choreographers.

The judges have made their decisions; the boy and the girl leaving them tonight are Malece and Alan.