BY Cate Meighan on September 10, 2013 | Comments: Leave Comments
Related : Reality TV, Recap, So You Think You Can Dance, Television 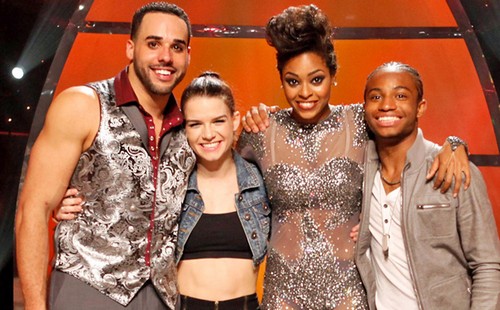 Tonight on FOX SO YOU THINK YOU CAN DANCE continues with a new episode. On tonight’s show we will find out who will be crowned America’s Favorite Dancer in the season finale. Did you watch the last episode? We did and we recapped it HERE, for you!

On last week’s show Amy went head-to-head with Jasmine and Aaron took on Fik-Shun as they competed to become America’s Favorite Male and Female Dancer.  The contestants took the stage five times each to perform a solo, a number with each of their fellow contestants and a dance in the style of their choice with an All-Star. Nigel and Mary were joined at the judges’ table by Olympic gold medal gymnast Gabby Douglas and dancing/judging phenomenon Paula Abdul.

On tonight’s show we will find out which guy and which girl will be deemed America’s Favorite Dancers: Aaron Turner, Amy Yakima, Jasmine Harper, or DuShaunt “Fik-Shun” Stegall.  So tune in to tonight’s Season Finale with special guest judges Adam Shankman, tWitch and Paula Abdul to find out if your favorites win the competition.

So You Think You Can Dance Season 10 Finale airs tonight at 8PM and you don’t want to miss the season finale and see if your favorite wins.  Celeb Dirty Laundry will be live blogging the show each week, so don’t forget to come back to this spot at 8PM EST for our live recap!

After an entire summer of waiting, finally we’re going to find out who wins So You Think You Can Dance. It’s down to four contestants: Aaron, Fikshun, Jasmine and Amy. One guy and one girl will be crowed season ten winners by the end of this evenings’ show. Joining regular judges Nigel Lythgoe, and Mary Murphy are Adam Shankman, Paula Abdul and the infamous Twitch.

The top twenty dancers are up first and perform a cool swing routine to Paul Anka’s reboot of “Wonderwall.” After that the judges start choosing numbers that they want to see again. Paula wanted to see Paul and Mackenzie’s dance to a stripped down version of Gaga’s “Blaze of Glory.”

In between the judges’ picks, the final four also get to choose a dance they wanted to perform and so Jasmine cranked out Blurred Lines with Marco. Adam Shankman requested a redo of Fikshun and Twitch’s “Hello Good Morning” which will likely be one of the highlights of the evening. Fikshun is on track to have a career similar to Twitch’s when all is said and done.

After announcing that there will be a season 11 of SYTYCD, Nigel chooses to see Aaron, Alexis and Curtis tap to You Really Did It, a number they debuted on the top twenty show with. Twitch is such a well-rounded dancer and it shows when he wants to see a Broadway piece redone tonight, Haley and Nico’s Kiss of the Spider Woman. This was never my favorite routine but it gets a standing ovation tonight.

Aaron chose Kissing You, a dance that he performed with all-star Katherine. I think when he first did this it became pretty clear that he is a real dancer and not just a tapper. This guy can handle any style and connect with any emotion.

I love group numbers so I’m happy to see the top ten guys performing their Sand dance again. I’ll bet the top ten ladies will be dancing to “Let’s Have a Kiki” again before this show ends. Mary decided that the one routine she needs to see is Tucker and Robert’s Travis Wall piece. Both guys bounced back from serious accidents and injury so the music and sentiment is especially poignant.

Way back at the beginning of summer the top twenty dancers first took the stage to a group number set by NappyTabs to “Puttin On the Ritz.” It included everyone from the show, including the judges and they revisit the big production once again tonight.

This night wouldn’t have been right without Mark Kantamara bringing his funky choreography back with Jenna as his muse.

Fikshun and Amy are both in a position to win and they both chose the NappyTabs bellhop routine to perform for the last time together. After they dance we see a video of all of Nigel and Mary’s moments over this season and they seal the love affair with a dance to Let’s Get It On. I have to admit I love Mary’s huge pink cotton candy looking wig!

NappyTabs put together another brilliant original group dance to a modern version of “Rock Lobster.” Now put the top ten dancers along with the all-stars in a beach blanket bingo kind of theme and you end up with one hell of a cool number.

Here we go, it’s finally time to crown the winners. Nigel says this is a year where we will be happy for whoever wins and I think that’s true. We’re going to choose the male winner first. There is really no wrong choice here but I’m hoping Aaron wins it. We watch a montage of both of them and America’s favorite male dancer is Fikshun who dissolves into a million tears. Now onto the ladies, Jasmine and Amy — they look like a nervous wreck waiting for the results. Amy wins the lady’s title of America’s favorite dancer.

There you have it, folks! What did you think of this season? Happy with the winners?