BY Cate Meighan on September 3, 2013 | Comments: 2 comments
Related : Reality TV, Recap, So You Think You Can Dance, Television 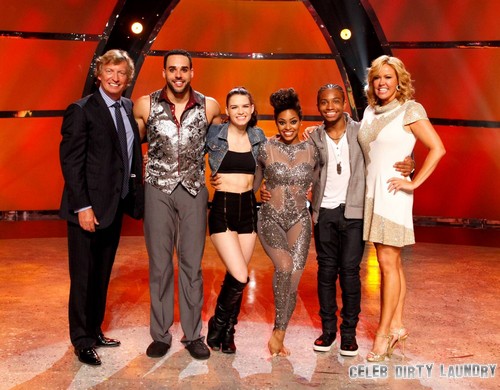 Tonight on FOX SO YOU THINK YOU CAN DANCE continues with a new episode. On tonight’s show America’s favorite four dancers: Amy Yakima, Aaron Turner, Du-Shaunt “Fik-Shun” Stegall and Jasmine Harper perform for the nation one last time to determine who the fans will choose as their favorite guy and girl in this summer’s hottest dancing competition. Did you watch the last episode? We did and we recapped it HERE, for you!

On last week’s show the remaining Top 6 performed for your votes.   They kicked off the evening with an African number choreographed by Sean Cheesman to Soweto Gospel Choir’s “Hlohonolofatsa.” Last week’s performance were stunning and they will have to bring more this week to move ahead.  The guest judge tonight sitting with Mary and Nigel was Modern Family actor Jesse Tyler Ferguson.  Hayley left the competition as well as Paul.

On tonight’s show Amy will go head-to-head with Jasmine and Aaron will take on Fik-Shun as they compete to become America’s Favorite Male and Female Dancer.  Be sure to tune in to watch your favorites in their season finale performances.

So You Think You Can Dance Season 11 Episode 17 airs tonight at 8PM and you don’t want to miss the Top 4 dancing with the All-Stars.  Celeb Dirty Laundry will be live blogging the show each week, so don’t forget to come back to this spot at 8PM EST for our live recap!

It’s finally here, the final performances of So You Think You Can Dance! Gabby Douglas and Paula Abdul share the judging table with regulars Nigel Lythgoe and Mary Murphy.

Aaron and Amy start off the show with a Ray Leeper jazz piece. It’s super edgy with a lot of techno vibe thrown in there. Nigel thought it was fabulous and Mary thinks they have yet to put a foot wrong. Gabby loved the high voltage energy and Paula can’t quite praise them enough. It was a great start to the show.

Jasmine a Fikshun are teamed for a Travis Wall contemporary piece. This didn’t seem like it would work out because their body types and styles are so different but it was really good. Mary thought this would kill Fikshun and it was amazing instead. Gabby has goosebumps and Paula thinks every bit of movement was gorgeous.

Aaron is paired will all star Melinda for a tap routine to Bruno Mars If I Was Your Man. They got a standing ovation for the first full tap number ever on this show. Gabby thought they were on fire and Paula thinks aaron is the ultimate storyteller of the season. Nigel wants to see more tap and thanks Aaron for being the first tapper in the finale. Mary loved it and thought the complex rhythms were music to her ears.

Jasmine is taking the stage with all star Comfort for a hip hop routine which should be pretty awesome. They are working with NappyTabs which can only mean a great performance. They hit the stage on bikes to Beyonce’s Who Runs the World and it’s ridiculously good.  Jasmine just showed everyone that she is way more than a contemporary dancer. Paula wants to be in their girl group, Nigel loves that she’s really fighting to win it and Mary thinks that Jasmine totally kept up with Comfort.

Amy and Fikshun drew a paso/tango out of the hat and it was really good. Nigel thought it was sensational and that Amy was very strong in this. Mary thought it was super tough and that Fikshun partnered her really well. Gabby loved the chemistry and Paula thought Fikshun handled her woman pretty well out there.

I love a good samba so I’m thrilled that Aaron and Jasmine are doing one tonite.  This was way hot and I loved it. Mary was not a fan and she thought the technique was missing. Gabby thought they did well and Paula absolutely loves them together. Nigel wasn’t feeling the chemistry either.

[9:58:04 PM] Cate Meighan: Fikshun chose all star Twitch to dance with which means he’s going out with a bang. Needless to say they totally lit up the stage with Hello Good morning remix. Gabby loved the energy and just thought it was all amazing. Paula thought it was fantastic and had to be a dream for Fikshun to dance with twitch. Nigel thinks it was like watching Twitch and Twitch Jr. Mary raves about everything and thinks Fikshun will be thrilled to have this dance on tape for years to come.

Amy is joining all star Robert next for a Stacey Tookey routine. This is about a guy who gives up after being stuck in the friend zone and as Nigel puts it, the pair of them were intoxicating. Paula is crying and says it was her favorite of the night. Mary believes she has laid it all out there tonight and Gabby is blown away.

Aaron and Fikshun are teaming up for a Tyce Diorio Broadway number that is way cool. It’s reminiscent of a Michael Kidd routine and it was fun stuff. Nigel hopes everyone remembers what both did all season. Mary thinks they were the cutest thing ever and they were. She loves this style and she thinks it put aaron back on top. Gabby thinks they put on a phenomenal show and Paula thinks it showed off the both of them well.

Closing the evening will be Jasmine and Amy doing a routine by Mark Kantamaura which means it’s quirky as hell and really awesome. The used a song from The Fifth Element and the idea was that they were to move like Siamese twins. Mary loved the quirkyness and Gabby thought it was great. Nigel thinks it was obviously loopy and good fun and Paula felt at home watching. No one knows who will actually win this so tune in next week to find out!