BY Cate Meighan on August 27, 2013 | Comments: 2 comments
Related : Reality TV, Recap, So You Think You Can Dance, Television 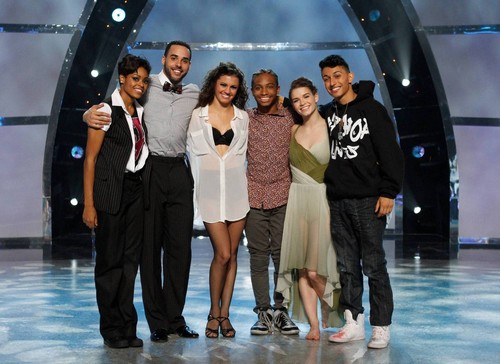 Tonight on FOX SO YOU THINK YOU CAN DANCE continues with a new episode. On tonight’s show America’s favorite six dancers perform for the nation again in this summer’s hottest dancing competition. Did you watch the last episode? We did and we recapped it HERE, for you!

On last week’s show we saw the  All-Stars both choreographing and dancing with the Top 8. The show openned with a cabaret-inspired routine set to Brick + Mortar’s “Move to the Ocean” and choreographed by Mia Michaels. Joining Mary and Nigel at the judges’ table was actress Jenna Elfman of “Dharma and Greg” fame, who actually began her professional career as a classically trained dancer.  By the end of the evening both Tucker and Jenna were sent home.

On tonight’s show the remaining Top 6 include Amy Yakima, Aaron Turner, Hayley Erbert, Du-Shaunt “Fik-Shun” Stegall, Jasmine Harper, Paul Karmiryan perform for your votes.  Last week’s performance were stunning and they will have to bring more this week to move ahead.  The guest judge tonight sitting with Mary and Nigel is Modern Family actor Jesse Tyler Ferguson.

So You Think You Can Dance Season 11 Episode 16 airs tonight at 8PM and you don’t want to miss the Top 6 dancing with the All-Stars.  Celeb Dirty Laundry will be live blogging the show each week, so don’t forget to come back to this spot at 8PM EST for our live recap!

Tonight is make it or break it time on So You Think You Can Dance. We are down to the top six and two of them will be leaving tonight. Each dancer will perform twice tonight and guest judge Jesse Tyler Ferguson joins Mary Murphy and Nigel Lythgoe on the panel. The six dance together to a tribal piece by Sean Cheeseman that is well done but not really my cup of tea.

Paul is paired with all star Katherine for a Tyce Diorio jazz piece that was just fab. It was supposed to be a dance battle and I’m not sure who won this. Nigel thinks Paul proves each week that he can do anything. Mary thinks it was so sharp and spectacular and that he drips with talent. Jesse is thrilled with Paul and he thinks Katherine brought him to a higher level.

Hayley knew she had to bring it this week and with all star Joshua she took on a Nappy Tabs routine and so in character. Nigel and killed it. It was as strong as ever and she totally found her hip hop pocket. Mary thought it was as good as any hip hop routine ever on the show. Jesse loves that she was a hard ass and Nigel thinks she deserves to still be in this competition.

All of the contestants are dancing solos tonight as well as being partnered. Amy performs a stunning contemporary piece to The Red Violin and in total contrast Fikshun proves that being on the show is making him more confident in his animating as well.

Aaron is such a crowd favorite and he plays one half of a messy couple with all star Melanie. The dance is set to George Michael’s Faith and even though he drops her for a sec it works for the character. Jesse loved it and Nigel thinks the routine was such a great idea. He states the obvious, Aaron gets stronger every week. Mary loved the 9 different leg kicks that were so smooth. Mary says she would choose him as a partner.

Fiksun drew the dreaded foxtrot and he has all star Witney to help him through it. I think Fikshun actually pulled this routine off. Mary thought parts of it were touch and go but his lines were still super straight. Jesse thinks Fikshun is such a force and his light is so bright that he’s staying put. Nigel thinks Witney looks like a screen goddess and he’s glad last weeks performance will get Fikshun into the final.

Paul is primarily a latin ballroom technician and he puts it on full display in his solo while Haley’s contemporary spot is gentle and stunning.

Jasmine teamed up with all star Neil to give the performance of the night- so far. A contemporary piece based on the hurricane that wiped out tons of people. They are a couple fighting to hang on to each other. Nigel thinks it is the best Neil has ever danced and that Jasmine will join a fabulous company as soon as the SYTYCD tour wraps up. Mary believes Jasmine is spectacular. Jesse thinks the two had the heart to back up the social relevance.

As far as solos go I have to say that Aaron has made me love tap, something I never thought I’d say.

Amy pulled Bollywood out of the hat and hopefully all star Alex will be a good partner for this. It’s funny because as soon as it started I liked it. The energy was high and the knee turns were brutal but boy did they sell it. Mary can’t believe how athletic this was and how nuts the knee spins were. Jesse needs a massage after watching it because his muscles hurt. Nigel loved the difficulty and he thought it was danced fabulously.

Now the contestants get to dance together. Paul and Haley are doing a contemporary piece about being there for each other and it looks tough. They got a standing ovation and it was just stunning. They performed to an acoustic version of 500 Miles and was amazing. Jesse loved it to pieces and Mary thought their connection was amazing. Nigel loved that they truly got each other through it beautifully.

Amy and Fikshun are lucky enough to get a Dave Scott hip hop routine that is friggin hot. I love when lyrical hip hop is smooth and smokin like this number to Usher’s Lemme See was. Nigel reminds people they can be sexy without sticking it in your face like Miley did. Mary loves how together and in sync they were. Jesse thinks Amy is super versatile and Fikshun is a mega star.

Aaron and Jasmine are back together and doing a Cheeseman jazz routine involving a mirror. It is a syncopated freak show in the best of ways. Love, love, love them back together. Mary can hardly stop screaming long enough to dish the praise and Jesse has a crush on Aaron. He turned pure red as he said it and had a hard time composing himself. Nigel can’t rave enough about these two.

Now it’s time to send two people home and this is going to be rough. No one deserves to go but it’s ladies first. Amy is the first name called to make it into next weeks’ finale. Haley looks like she knows she’s a goner and unfortunately she is. She is so happy though. She knows she performs next week and her career is just beginning.

It’s the guys turn and the first one making it into the finale is Aaron. This makes up for Haley being bounced because I LOVE Aaron. The final dancer through to the finale is Fikshun. Double yay!

Tune in next week to see who is crowned the winner. It’s Amy vs. Jasmine and Aaron vs. Fikshun!