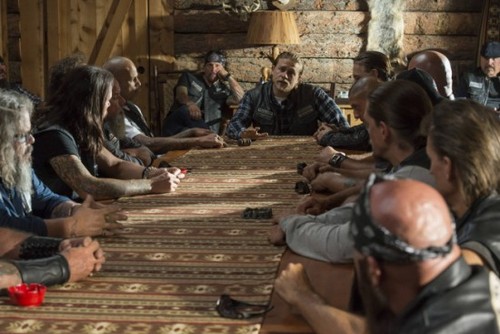 Tonight, FX’s dark-around-the-edges drama, SONS OF ANARCHY, returns with an all new episode entitled “Salvage.” During tonight’s episode, Jax and the MC must confront their past and choose their future.  Did you watch last week’s episode?  We did and we have a full and detailed recap, right here for you.

On last week’s episode Jack was determined to get SAMCRO out of the gun business and get into a legitimate business.  The Irish of course were not happy about his and took measures to show the club how serious they are.  Chibs was not pleased with the direction that Jax was taking the club and he reminded Jax that the club was not his.  The club struggled with the aftermath of Torric’s death.

On tonight’s show the guys confront their past.  Bobby show back up tonight after the bombing at SAMCRO’s clubhouse.  The club knows that the Irish tried to kill them and now they have to decide how they deal with that.

Tonight’s episode looks like it is going to be great and you won’t want to miss it, so be sure to tune in for our live coverage of FX’s Sons Of Anarchy season 6 episode 6 at 10 PM EST! While you wait for our recap hit the comments and let us know how excited you are about the return of Sons of Anarchy.

RECAP: Jax and the boys are surveying the damage to the club after the Irish bombed them. Jax is alone with Chibs inside the club, they both look very upset. Chibs finds the gavel and gives it to Jax and tells him that they are going to face this.

Jax tells Eli the person who did the bombing was someone who he wanted to end a relationship with. Jax asks the sheriff to please not crawl all over him on this.

Gemma is furious, she is at the police station; she sees Nero and he asks her what is he going to do with her, then asks if she is ok. Gemma tells him that she can’t sleep but thankfully nobody got hurt. Gemma says that she knows Nero wants to get away from the MC but she wants to be with her family now.

Jax goes to see Tara, she asks how the baby is doing; he hasn’t slept or ate anything. Jax tells her that they are heading out to Chester, Tara tells him that she is going to get an ultrasound. Jax has a long distance call, he leaves Tara and goes to take it. On the phone, it is the Irish and Jax is told that if he doesn’t make a deal they will do more bombing. Jax has to facilitate the transition and make sure his buyers are on board without taking a cut. All the boys agree and tell him understood. The Irish tell Jax that he pushed them to desperate measures and it is not their fault. Jax agrees to cut Connor and their other guys loose, he tells them that he didn’t want a war.

Cribs tells Jax that they should keep Connor at least for another couple of days to make sure this is all real.

Gemma meets up with Jax and tells him that Nero was not helpful. Jax tells Gemma that he wants Clay to know what happened, he wants him to take the Irish deal. Gemma starts to cry, but she tells Jax that she is here for him. Jax then tells Gemma to keep an eye on Tara and make sure that she is not alone.

Eli is at the station, he thinks Jax pissed off his supplier, the IRA. Eli tells the DA that he knows the DNA was a match, but he thinks it was a set up.

Tara is at the hospital and Wayne wants to know if she thought about his offer. Tara goes on to say that she is fling for divorce just when Wendy shows up. Wayne tells Tara she is spinning a lot of plates.

Jax and the boys are on the road and they get pulled over by two cops. The cops tell Jax that wearing the gang colors are illegal, Jax tells them they are not in a gang, they are in a club. The boys have to show all their ID. The cop wants to pick up their bikes, Jax tells him he knows that he doesn’t want them to pass through Eden again and promises they won’t if he just lets them go. Juice challenges one of the cops. The cop then handcuffs Juice who then hits him and all hell breaks loose. The two cops are hit multiple times, their guns taken from them and the boys get away. Police backup arrives and picks of the cops, then the van races after the boys. Juice jumps off his bike and it goes under the police van causing it to crash.

Juice announces that nobody is looking for them, the cops who were after them were dirty. Jax gives Gerry a big hug, the boys made it there safely.

Gemma is back in prison and she is with Clay, she tells him what the Irish did. Gemma tells Clay that Jax wants him to move forward with the offer. Gemma then tells Clay how Nero was arrested for the murder of the girl, how he was setup. Jax is at the table with all the charters and thanks them for all being there. Jax tells them he knows a lot knew his old man who was conflicted at the end with the decisions he made; that fear and that doubt ruined him. Jax goes on to say that he is not following that path, the choices he makes are not because he is afraid or has doubts about the club. Jax says that he watched his best friend get his head caved in to protect what they have. Sons of Anarchy is at a crossroads with the club having being burned down and he can’t blame his mistakes on his predecessor. Jax says he wants them out of guns, they barely earn a profit; he is going to move Red Wood into more legitimate enterprises. SAMCRO’s future is in pussy not bullets. Jax insists that if they don’t get rid of guns, the club won’t have a future. All the 20 deaths in the past two years were tied to the gun business.

Gemma is back at the police station, she walks in to an office and the DA is there, Eli introduces them. Gemma tells the DA that Nero was set up by Torric who was killed by Otto, furthermore Nero was with her the whole night. Eli warns the DA that Torric was on payroll and they better hope that he did have nothing to do with the murder. Eli heads to the motel were Torric was living, he smells bleach. He finds guns, lots of them. Eli gets curious when he sees a rug over the carpet, they look underneath and there are bullet holes. The DA walks in and Eli tells her that Nero is not responsible, she won’t listen until they have DNA to prove Torric had something to do with it.

Juice catches up with Jax who tells him no more cowboy shit. Tara calls Jax and tells him the ultrasound was fine. Tara’s lawyer shows up and tells her Patterson called and there is a deal. Tara is with the DA and her lawyer who listen to the offer.

A friend shows up to see Nero, she is pretty upset, Gemma goes to meet her and it is a transvestite. He says he is so sorry that Nero is in jail, he wouldn’t harm anyone. Gemma wants to know their connection, she tells him that she knew Nero before the transformation, his mother was one of Nero’s street performers. Nero took care of her since she was 15, her guardian angel. She has a bruise under her eye, someone beat her up, Gemma hugs her and tells her that she is safe.

Jax and the boys head to the pound to retrieve Juice’s bike. While there, the boys find a room full of motorcycles.

Back at the police station, the DA heads into the washroom and rinses her face. She then takes off her wig and says “Time to go hood sister”. She sees Tara and tells her that she will be prosecuting in three weeks.

Jax finds the two cops who tried to arrest Juice, he tells them Juice is going to take the Liberace bike and he wants an apology to all his guys for twhat they did to them.