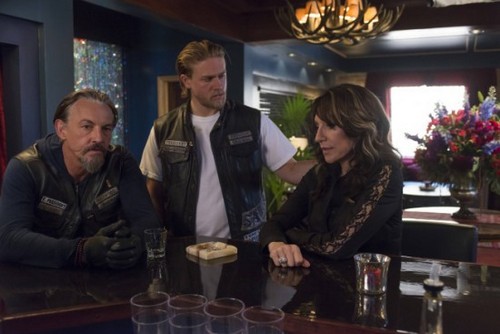 Tonight, FX’s dark-around-the-edges drama, SONS OF ANARCHY, returns with an all new episode entitled “The Mad King.” During tonight’s episode, the club is forced to make an uneasy alliance with unforeseen consequences.  Did you watch last week’s episode?  We did and we have a full and detailed recap, right here for you.

On last week’s episode an attack at the compound led the Sons to seek revenge.  Lee Toric out of the way after last week’s episode.  The Irish and the gun issue are now the most prominent threat faced by SAMCRO.  Chibs now realizes that the man he once saw as a savior for the club might be a few steps away from damaging it even further.

On tonight’s show  Jack is determined to get SAMCRO out of the gun business and get into a legitimate business.  The Irish of course are not happy about his and take measures to show the club how serious they are.  Chibs is not pleased with the direction that Jax is taking the club and he reminds Jax that the club is not his.  The club will struggle with the aftermath of Torric’s death.

Tonight’s episode looks like it is going to be great and you won’t want to miss it, so be sure to tune in for our live coverage of FX’s Sons Of Anarchy season 6 episode 5 at 10 PM EST! While you wait for our recap hit the comments and let us know how excited you are about the return of Sons of Anarchy.
RECAP: Jax stops this guy in a van whose partner is inside a building and he wants to know what he is doing there. Jax then breaks into the building and attacks the guy. Jax threatens him and says he wants to know where Gail and Connor are, the guy doesn’t want to talk and Jax stabs his hand. The guy finally tells Jax that he was supposed to pick up Connor somewhere. Jax makes the guy right down the address.

Jax goes to see the guys and tells them that he has to go deal with this shit.

The DA wants to know if there is progress on the murder of  Aaron Burn. The Sheriff tells DA that Lee was killed in prison, she hopes that Tara can shed some light on the murder. The Sheriff doesn’t think Tara is the bad guy, the DA says she is bad until she does some good.

Jax goes to see Gemma, she tells him she wants no more bodies as he is about to head out with Nero. Jax first goes to see Tara and says that she is having too much anxiety in her first trimester and doesn’t know what to do.

Jax and Nero take off, with the sheriff following behind them. Nero asks Jax what is going on with the Irish. Jax tells Nero he knows it is messy right now, but he can count on him. Nero tells him not to give details, just tell him when to duck.

Charley pulls up to the guy the Sheriff that is following Nero and Jax and basically tells him to leave.

Charley goes and knocks on the door, asks Jax and Nero why the Sheriff was following him. Jax says that the girl that was murdered was one of his.

Tig and Chibs pick up Jax and they go to get Connor. A shoot out ensues, they find the guns they were looking for but Jax decides to leave them as a peace offering.

Clay is in prison and a guy comes around with books and offers him one, tells him he will like page 47. Clay finds a note.

Jax has the Irish tied up, tells him he doesn’t want any more blood shed, he just wants the information he is looking for.

Jax calls Brendon, who thinks it is Connor on the phone. Jax tells him that he doesn’t want a war. Jax tells him about the man he killed and he will let the rest go as long as he gets assurances. Jax says he talked to Galen wanted out. Jax tells them that Clay is an unreliable source, but he has August and he is reliable. Jax tells them to give August a chance, he will be good for the cause. Brendon says they need to think about it.

Gemma goes to see Wendy and tells her that they are in lock down. The Gemma says she wants a copy of the will, she wants to show Jax what Tara is doing behind her back. Gemma then gives Wendy some of April’s baby pictures that she found.

Clay’s lawyer has arranged a conjugal visit with Gemma, Chibbs gets voted to go and tell Gemma about it.

Nero goes to see the sheriff and asks him why he is up his ass for a murder that he had nothing to with. The sheriff tells Nero that SAMCRO gun was involved in the murder and he was following them.

Gemma goes to see Clay and he tells her that the Irish reached out to him. Gemma tells about the murders and how Jax is trying to broker a peace, they can’t go to war. Clay tells Gemma on how the Irish want to spring him and create a crew, run the whole thing from Belfast.

Gemma tries to leave and two guys come in and want her to have sex with Clay while they watch or they are going to beat her up. Gemma tries to refuse, but when they give a couple of punches to Clay, she gives in and starts kissing him. Afterwards, Clay declares that he is going to kill both of them.

Charley has words with Jax and Nero, then he leaves. Jax asks Gemma if she talked to Clay. Chibs is alone with Jax and he is furious about the deal offered to Clay from the Irish. Chibs tells Jax that he cannot run the club alone. Chibs asks Jax if he trusts him because it’s not just his club. Jax says it may not be anyone’s club for much longer. Chibs tells Jax not to give up Clay as it may be there only way in.

Gemma tells Nero she needs to speak to him, she doesn’t want to keep things from him.

The Sheriff got the DNA from the truck.

Chibs brought everyone up to speed, Jax thanks him.

Gemma tells Nero to promise that he won’t take it to Jax.

The Sherif and his men arrive at the club. Inside the club, Jax notices a pen on the table, it’s Irish and Chucky says it was delivered a couple of hours ago along with some beer. Jax puts two and two together, the Irish sent the beer and it is a bomb. Everyone runs out of the club, not sure if everyone made it, but the bomb goes off and the club goes up in smoke.