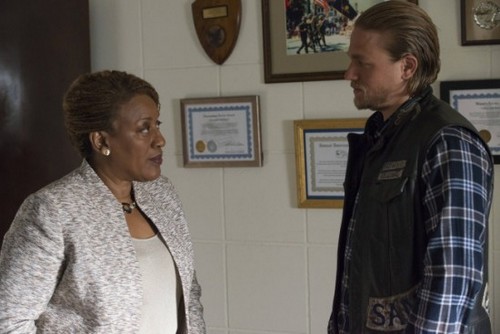 Tonight, FX’s dark-around-the-edges drama, SONS OF ANARCHY, returns with an all new episode entitled “John 8:32.” During tonight’s episode, Jax learns new secrets that turn his world sideways.  Did you watch last week’s episode?  We did and we have a full and detailed recap, right here for you.

On last week’s episode after Tara’s huge move last week it was clear that neither Unser nor Wendy new exactly how far she was willing to go.  Everyone last week was dealing with the aftermath of what she did.  Jax felt a lot of pressure on last week’s show with Tara pulling him in one direction and club problems pulling him in another.  His problems with the Irish were far from over.

Tonight’s episode looks like it is going to be great and you won’t want to miss it, so be sure to tune in for our live coverage of FX’s Sons Of Anarchy season 6 episode 8 at 10 PM EST! While you wait for our recap hit the comments and let us know how excited you are about the return of Sons of Anarchy.

RECAP: Jax is up and staring at himself in the mirror, he rubs his tattoo on his chest and then leaves the bathroom because he hears the baby cry. Gemma is up, she goes back to the bed and kneels down beside it like she is praying. Nero has just woken up as well, she tells him that she is glad that he is home. Tara is up as well, she joins Jax in the kitchen who is feeding the baby and takes over.

Gemma is in the kitchen with Nero, she tells him that shit happened between her and Tara. Gemma tells Nero what happened and mentions that Wendy was in on it. Nero tells Gemma that she has some heavy secrets and they are weighing on her. Gemma tells Nero she loves him and kisses him.

The DA shows up and her hair is different, she is no longer wearing a wig. She goes in to see Roosevelt and they talk about the boy’s father who got killed last week. She tells him that she wants three extra units on Jax, she wants 24/7 surveillance. He doesn’t agree, she asks him if he is having a hard time doing it, he says no.

Jax is with the boys  at the ice cream shop and Unser wants to talk to him. Jax tells him that Tara said he was good with the boys, he thanks him. A girl is outside, she throws something at the window and breaks the glass and then runs, Unser says she is Putner’s kid. Unser thinks she blames SAMCRO for her mother’s death.

We see Clay in prison, he has joined some kind of bible study.

Roosevelt shows up, he sees the window broken to the ice cream shop and asks what happened. Roosevelt then tells Jax that he is going to have a shadow for a while and he can’t do anything about, he tells Jax not to make it ugly.

Tara is with her lawyer who tells her that Margaret falsified all the information on her pregnancy and she doesn’t like it one bit.

Back to Clay at his bible study and he interrupts the priest and tells him that he doesn’t get saved by Jesus but pussy. Then Clay starts shouting pussy over and over again, a guard comes near him and bits his nose off. There is blood everywhere and Clay is detained by other guards.

Nero is back at the club, he and Jax have a conversation Jax pretty much tells him to put their personal lives on the side if they are going to work together. Chucky shows up, he tells Jax that he got a health violation thanks to the DA.

Gemma shows up, Jax tells her not to send Nero to do her dirty work. Gemma gets mad, she tells Jax that the DA wanted Nero to give him up and he wouldn’t. In fact, Nero gave himself as the gun source so the DA would back off.

Tig walks in and tells Jax they have an address for Putner. Jax heads over there and meets him, says he doesn’t want to hurt his kid, he just wants some answers. Inside the house, he tells Jax that the girl has anxiety and she is bi-polar. Jax asks if he knows who he is, he says yes. Jax asks if the reason he was attacked was because of who his dad was. Putner says that his daughter was looking for pictures because they are packing up the house and he guesses that she blames them for her death.

Tara is at the daycare and Nero shows up to speak to her. Nero tells her he is there to check on her emotional health. He tells her that she doesn’t strike him as a malicious person, then he asks if she can weigh in on what she did. Tara says Gemma caused her miscarriage. Nero tells her that Gemma will not back down and this is not going to end good. Tara tells Nero if he wants it to end well, she suggests he gets out now before he ends up dead like Gemma’s ex.

In Prison, Clay is secured in a holding room and doctor comes in and tells the two guards to leave. Once alone with Clay, the doctor lets him loose, gives him a cell phone and tells him he has 45 minutes till the next rotation.

Gemma surprises Margaret, tells her she could squeeze the swallow out of her throat. Gemma says that she is going to take those medical records documenting Tara’s pregnancy and present them to the board. Margaret says that it is her word against Gemma’s, that is all Gemma had to hear, she knows now that Tara was lying. Gemma tells Margaret that when Jax proves the truth, there won’t be enough security in the state to protect her.

SAMCRO takes a vote, they all vote to make an offer to the DA. The DA is in her office and Jax shows up; she is surprised. Jax tells her that Sons Of Anarchy was created by his father and he is there to make her an offer. She tells him that he some balls, he tells her that he also has some Irish men that sell KG-9’s. Jax offers to give up Galen for immunity, for him and the club of all gun charges, past and present. Jax wants a legitimate club, they won’t break the law and the violence stops. Jax then tells her that she needs to look at Tara’s case, Torric was the one connecting the dots, Tara had nothing to do with it. The DA says she is supposed to expedite everything on good faith. Jax tells her that he will tell her where to find Galen and the guns, he is giving her a win way above her pay grade. Jax says that he is a scum bag outlaw and she is the pillar of justice and neither one of them like to look at themselves in the mirror. She tells him that if she doesn’t hear from him in ten days, she will make him miserable for the rest of his life and his wife will be in jail until his boys graduate high school. The deal is made.

Nero and Jax get into a fight, Gemma walks in just in time to stop it before one of them get hurt back. Nero starts screaming and tells Jax that he has no idea what Gemma has done. Nero tells Jax that Gemma was forced to have sex with Clay in prison. Gemma walks over to Jax and tells him that she just talked to Margaret, she confirmed that Tara was not pregnant, she wants out; she is filing for divorce and is going to take the boys away. Gemma says she is sorry and if Tara is going to tell him, then he needs to find someone who will.

The lawyer leaves, Unser asks Jax if he got what he needed, then he reminds him that he promised that nobody would get hurt.

Gemma is cleaning up Nero, he says that Tara said she killed John and he wants to know if there is any truth to that. Gemma tells him that John was trying to get the club out of guns, making trips back and forth to Belfast, trying to make it right with the Irish and fell in love with someone. She says JT became undone and wrote a manuscript about everything he ever did in SAMCRO, he stopped caring about the club and his family. Nero tells her that she didn’t answer his question, she says she didn’t do it, but she knew it had to be done, it is the code they live by. Gemma says she gave her blessing for Clay to kill JT and she has never told anyone, not even her son.

Jax drives up to the ice cream shop, Bobby tells him that Putner’s daughter is there to speak to him. The room clears and they are alone. She tells him that she is sorry about the window. She says she has a lot of shit going on in her head, he says they all do. She says her dad told her that he helped speak to her dad’s boss, they will be able to keep the house; she wants to know why he did that. Jax says that it is his way of saying he is sorry, she thanks him.

We see Tara, she is rocking the baby. We see Clay in a straight jacket. Gemma is smoking, by herself. Nero is sitting on the bed, deep in thought. Jax lights a cigarette, Putner’s girl has gone and we see her walking home. We see Tara rocking the baby again, there is a gun on her lap.