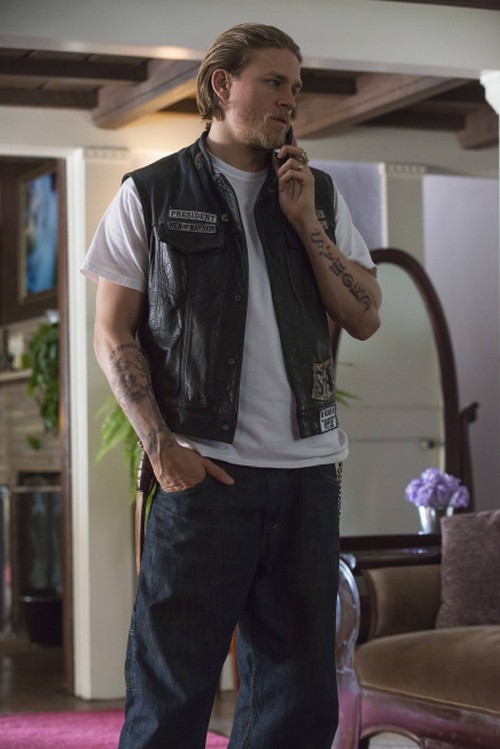 After months and months of waiting finally SONS OF ANARCHY returns to the FX with the premiere of its sixth season called, “Straw.”  On tonight’s show as Jax continues to push the club into more legitimate businesses he can’t escape the sins of SAMCRO’s past.  Did you watch last season’s finale?  If you want to get caught up we have a full and detailed recap, right here for you.

At the end of last season Jax had basically removed all threats to the club: guns, drugs, Pope, the RICO case, and Clay.   Clay is safely in jail and Tara was arrested and taken to jail on conspiracy to commit murder charges.  Bobby stepped down as vice-president he hoped things would change with Jax but found things were still the same.  Gemma reunited with Nero although he let her know life was going to get messy.

On tonight’s show the show creator Kurt Sutter said the premiere episode will feature a scene that’s sure to stir some debate in both fans and critics.  It will happen right at the end of tonight’s episode and it is going to rock SamCro forever.  Tonight’s show is going to pick up more or less right after Gemma and Clay were arrested.  Since Bobby stepped down as VP he will be trying to find his place in the club tonight.  Jax is going to have to live with the aftermath of Pope’s death and framing Clay.

Tonight’s episode looks like it is going to be great and you won’t want to miss it, so be sure to tune in for our live coverage of FX’s Sons Of Anarchy season 6 premiere at 10 PM EST! While you wait for our recap hit the comments and let us know how excited you are about the return of Sons of Anarchy.  What are you most excited to see.

The show opens with Jax writing in his journal, in which he contemplates what it means to be a leader, a father, and a person who’s made mistakes. He’s writing to the “sons” and says that the only advice he can give them is not to give into fear or the histories of outsiders, to believe in the things they love and those will lead them to their greatest truths. Jax picks up his baby boy and kisses Gemma on the cheek. Jax says he’s going to see Tara. He kisses his son goodbye and tells him to be good for grandma.

Otto’s in jail and he receives a visitor. He’s beaten and raped.

Jax has a private chat with Sheriff Cane about what’s going to go down in the future; they part ways.

Tara’s in jail and she’s told by Ally that she needs to talk with Jax, but she says she can’t let him see her like this. Tara thinks it was Gemma who turned her in. She has a bail hearing tomorrow morning. She says, “I have to get out of here.” Ally leaves and runs into Jax, who’s hellbent on seeing Tara. She tells Jax that Tara believes it was Gemma who turned her in, but Jax says Gemma would never go to the cops, but Ally Lowen says that she thinks “there’s very little your mother wouldn’t do to keep those boys [grandchildren] close.”

Gemma meets with Nero in a fancy, swanky bar. She has a present and says that she’s trying to buy his son’s attention. Jax comes in and says, “we need to talk.” They enter a private room. He asks if she threatened to turn Tara in if she was going to take the job in Oregon. She says no, of course not. She says, “yeah, I might’ve scared the smarts into her, but I never would’ve gone to the cops. It’s wendy you have to worry about.”

Meanwhile, Lyla enters the bar and she’s beat up pretty bad. Lyla says she was tortured. She tells them that her torturers were near the navy docks — and there were about five or six. Nero says that if they’re going to go there, they need to get permission to cross into that territory. Jax and the Sons agree to go check it out and Gemma says she’ll head back to the clubhouse.

In his private jail cell, Clay gets a visit from Lee Touric , who says that he knows he didn’t kill Damon Pope. He wouldn’t have been stupid enough to toss a printed weapon so far from the scene, and he guesses that Jax Teller is the real man with the blood on his hands. Lee says that his wants Sam Crow. He says it’s not about a case or his career; it’s very personal.

Bobby gets a fridge delivered.

The cops deliver Jax and Nero to Charlie Berofsky, the person in charge of this turf. Jax apologizes for stepping on his toes.

Lee visits Tara, and he asks how her stay has been. “Confined,” she says. Lee says he has no desire to help Tara; he wants to “use” her. He wants her to give up her husband, in exchange for full immunity and protection, but she says she can’t do that. She says she’s not guilty and she’s not a rat. Lee eventually leaves, leaving a distraught Tara alone int he room.

The Sons are at the docks.

Charlie and Nero venture into a new business opportunity by helping a blonde lady make her prostitution operation more legit.

Wayne enters Gemma’s office, and Gemma says how much she appreciates him helping out the boys. Wayne says, “You haven’t said anything about Clay.” And she says, “because I don’t want to.”

Lowen visits Gemma, and she says she needs to see Jax. Gemma asks Wayne to leave. Gemma gets really mad at Lowen for telling Jax that she might have had something to do with Tara’s current predicament. Gemma tells her not to forget who she works for. “I’d hate for Tara to be the last client you ever had.” She storms out of her office, leaving Lowen someone terrified.

Meanwhile, Clay is taken into general population. He sees all the hateful stares and now, fearing for his life, he says he’s willing to take Lee’s deal.

Lowen calls Jax. She says she wanted to tell you this in person, but she can’t, so she tells him: “Tara doesn’t want you at the hearing tomorrow.”

Chibs beats up Juice as Gemma watches from the office window.

Jax visited the escort house and hasn’t left yet. The madame asks if she can help with anything. She says she listens as well as she sucks dick. Jax responds with “it’s a family thing.” She asks him to help with the laundry.

Meanwhile, Lee sits in a room and shoots up.

A small child, perhaps twelve-years old, sits on a bench. He rolls up his sleeves to to reveal cut-scars and pulls a large gun from his backpack. We see him walk into a classroom and, while we don’t see the shots being fired, we get a shot of the window and hear shots in rapid succession.

Cops and ambulances arrive at the scene. Students are rushed out of the school. Meanwhile, we see a glimpse of Jax — clearly tormented by all that’s happening to his family life. There’s a montage of other characters, including Clay, who’s brought clothes. Tara sits in bed. Jax is being taken care of. Nero and Gemma return home and kiss.

Bobby has a map out and begins circling locations with a red colored pencil. He writes, “QUINN.”

Lee is very high in his room and stares at himself naked in the mirror. Meanwhile, Tara begins punching the crap out of an inmate. Before the show ends, we see Jax having sex with his new business partner, the woman in charge of their new escort service.

What did you think about this episode?