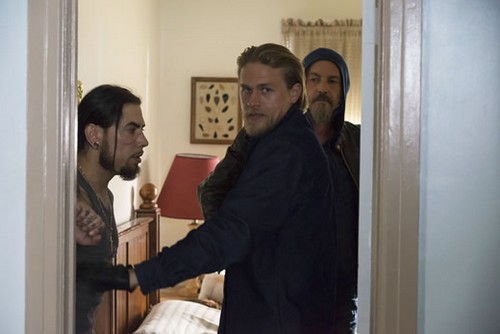 Tonight on FX’s dark drama about an outlaw motorcycle club SONS OF ANARCHY continues with a whole new episode called, “One One Six.”  On tonight’s show Jax deals with collateral damage.  Did you watch last week’s season 6 premiere?  We did and if you want to get caught up before tonight’s show, we have a full and detailed recap, right HERE for you!

On last week’s season premiere Tara was still in jail, Jax was running the club and Gemma was helping to take care of her grandchildren.  Kurt Sutter said there would be a scene that was sure to stir some debate in both fans and critics and he was right.  At the end of the episode a young boy was scene walking though a school and going on a shooting spree.  It was pretty disturbing, what did you think about it?

On tonight’s show guest starring is Dave Navarro.  The episode will deal with the immediate fallout of the school shooting that occurred in last week’s premiere.  Jax deals with collateral damage as external pressure continue to stack up against SAMCRO. Written by Chris Collins & Adria Lang; directed by Peter Weller.

Tonight’s episode looks like it is going to be great and you won’t want to miss it, so be sure to tune in for our live coverage of FX’s Sons Of Anarchy season 6 episode 2 at 10 PM EST! While you wait for our recap hit the comments and let us know how excited you are about the return of Sons of Anarchy.

RECAP: Gemma heads to the door and Nero’s cousin is there, he says his old ladies’ kid killed the kids at the school. Meanwhile, Clay wants to know what the end game is with Lee. Clay wants to see his wife and his son and he’s not signing shit from Lee until he does.

Nero tells Gemma that he is sorry that his cousin showed up. Gemma tells Nero that she has to go to Jax’s.

Tara does not want to go to jail, she wrote down everything she can remember and wants to put it in the past. Jax picks up Tara and takes her home, Gemma is there. Jax and Gemma walk out of the room, she tells him that something happened with Nero’s crew and he’s coming by. Gemma tells him that it is about the school shooting yesterday.

Jax then goes to speak to Tara, he gives her a hug first and they tell each other they were missed. Jax tells her that he understands why she wanted him to sign the papers but he didn’t sign them. He then says he is meeting with the Irish today, no more guns. He’s going to make trashy money moving forward, but it’s not dirty and not bloody; he is going to take care of his family from now on. Jax says that if he steps away now, it doesn’t make sense. Tara says that she could go to jail, but Jax tells her that she is going nowhere.

Jax goes to see Nero who tells him that his cousin’s old lady’s son was the one that killed those kids and used Juice’s gun. Nero asks Jax if he can help.

Gemma finds out that Clay wants to see her and tells Jax.

Tara tells Jax that she is going to hang with the boys, he tells her that he loves her and will see her later. Gemma is washing up some dishes and tells Tara she likes her hair. Tara thanks Gemma for taking care of the boys.

Nero and Jax want to get Nero’s cousin and old lady out of town because the cops are going to come after them.

Gemma goes to visit Clay in prison and asks him what he wants. Clay tells her he knows why she did it, the whole thing, Juice and the gun in slow motion. He tells her he was never easy to be with, but she was an amazing old lady who kept him on task and kept him strong. Clay tells her that whatever goes down none of it lands on her. Gemma says she doesn’t feel bad for doing what she did, for telling the truth. Gemma is pissed and she wants to leave. Gemma see Lee and knows he is behind putting Clay in prison, she calls him a dick.

Jax goes to meet the Irish and the issue of Clay comes up and Jax says that he ended up in jail because he was sloppy. Then he says that yesterday some kid killed a bunch of kids with their guns; he wants access to Clay to reach out to Jax’s customers. Then he says that he needs to send KG9’s to him because they are in big demand since the school shooting, so business as usual.

Al is back with Clay and tells him he needs to sign again, Clay won’t do it.

Tara wants to get a pregnancy test, confidentially, she doesn’t want anyone know that she is going for it.

Tara needs to make some big decision about Wendy being the primary guardian for the boys.

Al is on a mission to get the bikers down and goes to see Ms. Wynn but she tells him what he has is generic and he better get something much better.

Juice gives Nero’s cousins’ old lady a shot, then he smothers her with a pillow to kill her. Nero is upset because his cousin’s old ladies’ kid is dead and it is his and Jax’s fault. Nero asks if her death is Jax’s doing and he says no, it was the drugs and everything he is doing there is for him. Jax has to leave, he tells Chibs and Juice goodbye and he leaves.

Jax gets home to see Tara who is putting away the dishes, he hugs her and tells her that he is so glad that she is home, she says she is too. Jax says that he is sorry that he had to go, Tara wants to know what happened with Nero, he says nothing.

Al goes to an escort service, Bobby writes the name Quinn Harper in red. Chibs takes care of the burial of the two bodies, Juice helps to shovel the dirt on them. Jax and Tara have sex, she looks like she is going to cry.