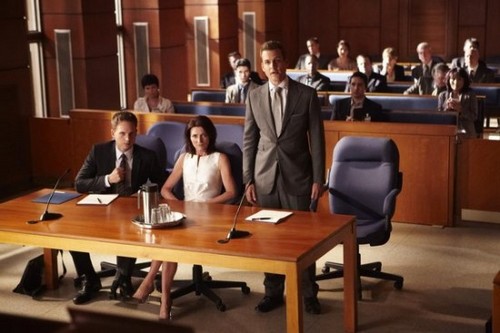 Tonight on the USA Network SUITS continues tonight with a new episode called, “Unfinished Business.” On tonight’s show a British version of Harvey arrives to stir things up at the firm. Did you watch last week’s season 3 premiere? We did and we recapped it right here for you!

On last week’s Louis offered Mike a case that could change his future at the firm. Harvey and Jessica teamed up to bring down an old nemesis who complicated their case to keep Ava Hessington out of jail.

On tonight’s show Cameron Dennis strikes back at Harvey by arresting one of his clients for murder. Katrina Bennett tries to win over Louis, who’s still smarting from his rejection by Mike; and a British version of Harvey arrives to stir things up at the firm.  He is all set to flirt with Donna (Sarah Rafferty).

Tonight’s season 3 episode 3 looks like it is going to be great and you won’t want to miss it, so be sure to tune in for our live coverage of USA Network’s “Suits” at 10:00 PM EST! While you wait for our recap hit the comments and let us know how excited you are for the season 3 episode 3 of Suits tonight.

Louis is mad. He’s taking it out Mike and he’s taking out on Harvey. That leaves Harvey no choice but try and soothe him with a big juicy case that came their way via Ava Hessington. Louis is still disgruntled but it is a good case and anyway Harvey suggested a rebound assosciate. Someone he not serious about but a person he can mess with for a while.

Harvey is feeling good about his meeting Ava although he never suspected she would want to hire him. She only just making her pitch when she gets arrested over murder. Cameron is making another play at arresting her. Also, and he does admit to it, to get back at Harvey.
Mike, now forgiven, is pulled on Ava’s case. Harvey makes it known that personal feelings don’t come into it. Ava doesn’t accept that rule. She wants Harvey to believe she wasn’t involved but he can’t afford to.

Mike may have been to pampered by Louis. Harvey can tell when out of the blue Mike mentions having a real lunch. Yeah that’s not who they are. However Mike should let people know that there is a “they”. Especially when he catches another associate trying to drop off a file on Harvey’s desk. Luckily he has Donna who’s willing to set everyone straight. As long as Mike still brings her coffee in the mornings out of penance.

Jessica claims to have forgiven Mike too. What they need to work on is not their relationship but Ava’s case. Thankfully Mike is helpful enough the judge is squeezing Cameron for actual evidence otherwise the case will end up getting dismissed.

As things begin looking up the real boss Darby has sent in another distraction. He sent over his fixer, a British Harvey named Stephen. Harvey of course has his back up however Donna is willing to be on her back for good ole Stephen. He’s that good.

Jessica asked Harvey to look into Stephen to find out what’s really going on. No need though with half of the hunt. Donna already checked into him. She did for herself but good info is still good info.

Harvey and Stephen meet up. Harvey tries to scare him off when he gets corrected. Stephen was sent to help Harvey overtake Jessica. Harvey remains skeptical even after Stephen claims he’s fine with only a name on the door. Still, Harvey turns down his offer.

Katrina was duly chastened by Donna earlier. She attempts to offer an olive branch to Mike and gets slapped down again. Katrina though shouldn’t have been spurned. She created a humiliating video of Mike and uses it a resume to get in good with Louis. What does he do? Louis takes Katrina as a protege.

The day continues falling down the staircase with a cup of coffee after Mike, Harvey, and Ava meets to strategies. Ava wants to bribe people and she won’t be talked out of it by Harvey again. The boys do their best to reason with her but to no avail. If they won’t help her then they’re fired. Harvey refuses to accept his forced resignation.

Mike still has to work on the case despite Ava’s decision. In order to get rid of distractions, Harvey deals with Katrina. A good thing too because Mike just figured out to help Ava. Now all they have to do is steal her away from Stephen the sneak or so Harvey thought.
Stephen turned her down and then he advised her. Which he knows will send Ava back to Harvey and she did. Harvey doesn’t go in to take the credit though he sent Mike. He didn’t want Ava questioning him over whether she was guilty.

When he returns to the office, he has drinks with Harvey. This is the first time they had drinks and deep down he knew it wasn’t to celebrate Ava getting away with murder. Harvey tells him the truth. He made a deal with Darby about ousting Jessica.