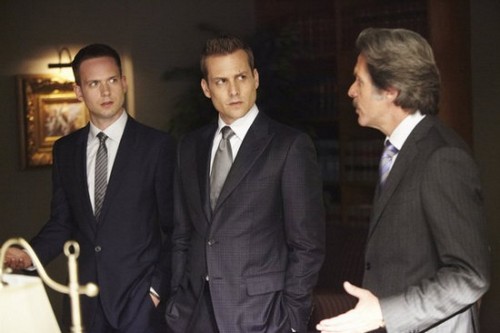 Tonight on the USA Network SUITS continues tonight with a new episode called, “Shadow of a Doubt.” On tonight’s show Mike invites Rachel to join him on a case that gets complicated when his secret falls in the line of fire — with Rachel’s parents. Did you watch last week’s episode? We did and we recapped it right here for you!

On tonight’s show lines between the personal and the professional get blurred when Harvey (Gabriel Macht) and Stephen (guest star Max Beesley) work together on Ava’s (guest star Michelle Fairley) case.  Meanwhile, Mike (Patrick J. Adams) invites Rachel (Meghan Markle) to join him on a case that gets complicated when his secret falls in the line of fire.  Guest Stars: Michelle Fairley, Max Beesley, Gary Cole.

Tonight’s season 3 episode 5 looks like it is going to be great and you won’t want to miss it, so be sure to tune in for our live coverage of USA Network’s “Suits” at 10:00 PM EST! While you wait for our recap hit the comments and let us know how excited you are for the season 3 episode 5 of Suits tonight.

Donna’s disappeared from the office. Harvey is worried about all of his paperwork and tries to get her to come back in however she’s currently occupied not with her dentist, as she claims, but with Stephen.

She tried to tell him about the relationship earlier but he was in a bad mood and unwilling to listen. Rachel tells her she should still try. He may not be worth his notice on a personal level but on a business level it does. Especially with the way Donna has been glowing recently. The whole thing about guys not noticing is a myth. Just ask Louis he knew something was up with Donna.

He merely thinks it’s probably an new exercise regiment because he tells her to keep doing what she’s doing all hours of the day. Technically he’s right. Sex is an exercise.

Harvey has his hands filled with Ava’s case. He pushed to have expedited in order to catch Cameron with egg on his face and if that doesn’t work then there’s option two. Get a new lawyer to replace Cameron. With only two weeks to trial; a new lawyer equals automatic failure.

Then there’s dealing with Stephen. Stephen says he’s there to help him with the case and yet he gets Mike thrown off it and fills the vacancy himself. What game is he playing?

Now Mike is free to work with Rachel. Well, work and play. Later he tries to make plans with her but she can’t. Her parents are coming into town. Mike doesn’t see a problem. He could meet them but Rachel doesn’t want him to. She doesn’t want to have to lie to her parents about Mike. It’s fine lying for him to others as long as it’s not to her family.

She changes her mind later after the two work on his case. All the needed to do was pertend to be Mike and Harvey and the two were able to make up.

Louis is feeling the loss of the associates. He knows he’s no longer in charge of them but Nigel has been ignoring them and only contacting them by memo. To make it worse Nigel as taken over Louis’s mud bath time.

Nigel is vindictive. He creates a plaque saying Lewis Litt Blew Me. Louis found out about it after walking in on the associates laughing. He goes storming into Nigel’s office ready to belittle when he suddenly he becomes entranced. By Nigel’s cat. It seems the two do have something in common. They both love cats in too strange of a way for two adult males.

Harvey’s case hasn’t improved with Stephen’s help. They end almost ruining any chance of Ava getting her company back. They were supposed to try and get the new chairmen to cooperate. Harvey now has to rethink this strategy but he found out they failed because Stephen went behind his back to threaten the mad they had to sweet talk. Harvey is mad and Stephen is trying to play “is this about Donna?” card. That’s one toe too far across the line.

Harvey has no other choice. He goes to Jessica for help. She knows what to do and speaks to Ava personally. Stephen in the meantime didn’t fare well Donna. She was upset he tried to use their relationship and throw it in Harvey’s face. She needs time to think but she’s not closing the door fully.

Rachel’s dinner with her family wasn’t so bad. Mike got along well with both of her parents. They get along so well that Rachel’s dad warns Mike that Rachel applied to Stanford. He didn’t know. He confronts Rachel over it. She was going to tell him right before her interview. Yet what she couldn’t say was that she really wanted to go there.

Louis and Nigel are semi-friends. Simply not on the professional level. Their bond is over cats. Nigel has to go out of the country and he appoints Louis as his cat-sitter. Louis is so happy even though he’s man enough to hide it.

Louis sees Donna and notices she’s lost her glow. He tells he she should get it back. Never mind who tries to stop her.

Mike and Rachel turn around their losing case. She convinced their key witness to rethink trusting her lying husband. Something Mike secretly feared Rachel is doing with him. He’s right in a small way. Rachel tells him she loves him but she has to make decisions on her own now. The same way he did.

Jessica extends an olive branch to Harvey. She helped him with his case in order to get him to side with her as she fights Darby. Will Harvey continue to attempt to steal her firm or will he help her?