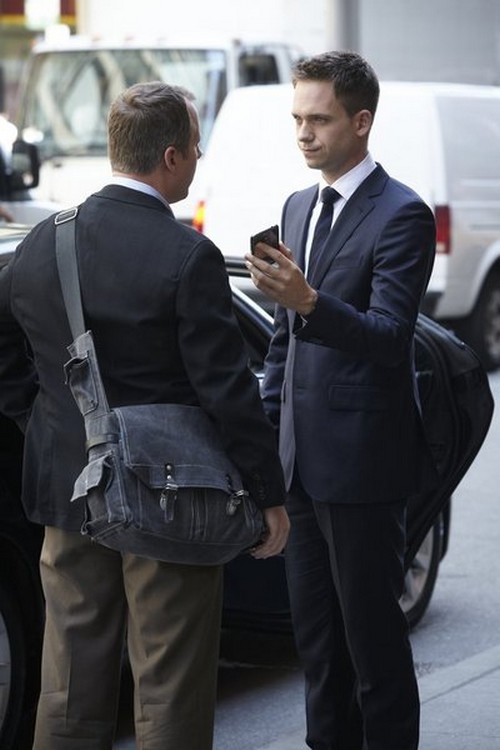 Tonight on the USA Network SUITS continues tonight with a new episode called, “Conflict of Interest.” On tonight’s show Louis’ works to thwart a hostile takeover of Hessington Oil by a rival businessman. Did you watch last week’s episode? We did and we recapped it right here for you!

On last week’s show Cameron Dennis struck back at Harvey by arresting one of his clients for murder. Katrina Bennett tried to win over Louis, who was still smarting from his rejection by Mike; and a British version of Harvey arrived to stir things up at the firm.  He was all set to flirt with Donna (Sarah Rafferty).

Tonight’s season 3 episode 4 looks like it is going to be great and you won’t want to miss it, so be sure to tune in for our live coverage of USA Network’s “Suits” at 10:00 PM EST! While you wait for our recap hit the comments and let us know how excited you are for the season 3 episode 4 of Suits tonight.

The show begins with Harvey, Mike, Louis and Katrina disagreeing about how to handle Ava’s case. Louis wants Ava to make a statement. Harvey doesn’t want her to. There is a vote to kick Ava out of her company. They need to find a way for Ava to keep her company that will not affect her murder case. Despite Harvey’s best efforts Louis has already put a plan into motion that will have Ava making a statement to the press.

Mike poses as Ava’s assistant and takes the interview Ava was to meet with to a different location. Harvey shows up at Ava’s table to tell her Conally, the reporter won’t be showing up. Ava is not thrilled with Harvey for keeping her silent. They disagree about whether she should talk or not. She is concerned about her company. Harvey reminds her she is on trial for her life and that Cameron will use her desire to keep her company against her. She leaves after telling Harvey to find a way for her to not lose her life or her company.

Jessica questions Harvey about Ava making a statement. Louis interrupts yelling about Harvey screwing up Ava’s interview. When the guys can’t agree on how to handle things Jessica intervenes when Louis suggests Ava step down. Harvey doesn’t like that idea and reminds Jessica that thanks to the merger she is not in charge. Nothing gets resolved.

Harvey tells Mike he is on Katrina duty so that Louis doesn’t shaft them. He doesn’t want Ava to be sacrificed.

Louis goes to Jessica to propose that she let him be her black swan. He wants to go behind Harvey’s back with his original strategy to dislodge Ava. Jessica doesn’t want to operate that way. Louis reminds her of how she has gone behind Harvey’s back only back then she was in charge and now she is not. Jessica is not thrilled with him either. He then goes to Katrina to tell her to keep an eye on Mike, which she is already doing. Mike and Katrina find dirt on Tony Ginaopolis.

Ava is made when a negative article comes out about her. She wants to make a statement so she can save her company. Harvey shares with her that Louis is saving her company but that does suffice with her.

Louis attempts to meet with Ginaopolis when he has trouble getting through to see him thanks to an assistant. Louis provides him with proof if Ginaopolis takes over Hessington they could get in trouble with the FCC. He is thwarted though when he assistants shuts down all of his evidence putting Louis in his place. Turns out Ginaopolis has the mayor in his pocket.

Mike and Katrina call a truce after working together. Donna and Rachel vie or Steven’s attention but he makes an arrangement with Donna. He needs her for companionship while he is in town. It is a very subtle and very business.

After his bad meeting Louis wants off the Hessington Oil case. Jessica finally agrees to let him to go the board to ditch Ava but makes it clear the conversation never happened.

Donna and Steve have their first arrangement date. It gets steamy.

Harvey coaches Ava on how to act in the deposition. He films the questions but loses his patience with her. He accuses her of committing the crime and pushes her until she is able to present herself in a confident manner as she answers the questions, As she defends herself to Mike and Harvey she gives them facts that finally get them to believe she did not commit murder.

Mike tells Katrina that Ava did not commit murder. He knows she is telling the truth and then shows her the proof. Katrina goes to Louis to tell him that Ava is innocent and give him the tape from Mike and Harvey’s deposition.

Harvey decides to let Ava talk to the board to help prevent her from losing the company.

Louis reveals to Jessica that Ava had nothing to do with the murders. He wants to try and stop the board from kicking her out. Jessica tells him it can’t be stopped because Ginaoplois will take over in the afternoon. She demands that he do nothing.

Donna and Steve make plans for anther date as Rachel listens to their conversation. Rachel wants dish on her sleeping with Steve. Donna says she thinks her match in Steve. Rachel thinks she should tell Harvey about Steve.

Ava gets voted out of her company and takes it out on Harvey who is blindsided. He learns that the firm sold out Ava and goes straight to Jessica. The two have a heated argument about the merger and what she did in Ava’s case. Harvey tells her she can’t stand being number two. Harvey leaves and tells Donna that she needs to get Edward on the phone. Donna was going to tell him about Steven but backs out after his bad mood is apparent.

Katrina tells Mike that she liked working with him. She also shares that she told Louis to stop his plan to out Ava but she would not have done anything to stop him. Their loyalties are clear. Rachel questions Mike about how he liked working with Katrina. He thinks it is cute that she is a little jealous then reassures her how he feels about her by telling her that he loves her.

Edward and Jessica have it out again about Ava’s case. She is also pissed when he reminds her that she allowed him to be in charge when she gave into the merger. None the less Edward reminder her he is in charge.