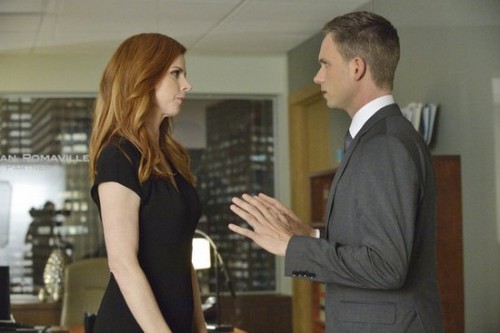 Tonight on the USA Network SUITS continues tonight with a new episode called, “The Other Time.”  On tonight’s show Mike looks back on what cost him his one chance at a degree.  Did you watch last week’s episode? We did and we recapped it right here for you!

Tonight’s season 3 episode 6 looks like it is going to be great and you won’t want to miss it, so be sure to tune in for our live coverage of USA Network’s “Suits” at 10:00 PM EST! While you wait for our recap hit the comments and let us know how excited you are for the season 3 episode 6 of Suits tonight.

Donna and Louis was having a funny little chat in the elevator when they come off and notice the office’s sign has changed. Louis decides to take a personal day and Donna goes to confront Harvey. Why didn’t he tell her? He usually tells her everything. But he says he didn’t want to disturb her knowing how busy she’s been. A low blow that Donna automatically knows is about Stephen.

There’s a reason why it bothers him even if he denies it. Early in their working relationship Harvey had a flirtatious relationship with Donna. She was important to him. Their flirty banter went back all the way to the D.A. office.

Back in the present, Mike found out that Cameron is making some heavy plays. Harvey is able to decipher that his former boss has got himself another witness. The case isn’t over yet.

Rachel is flying out for her interview at Stanford. She wants Mike to be happy for her but it’s hard knowing that she could go there and be apart from him for years. She also knows that he’s still mad about her going for the interview in the first place. In his own flashback Mike remembers when he refused to let something go. There was a guy treating him like crap from day one so Mike decides to fleece him out of money during card games.

However it turns out that the jerk remembered Mike’s super brain as he put it. The guy chose to cheat. Although Mike won’t be able to call the cops because he’s been drinking illegally all night. The money he lost was his part of his friend’s. Trevor hadn’t paid off his drug dealer yet when he smoked the pot. In order to stop him from beating up the jerk from last night; Mike was asked to use his gift to make some extra cash.

Harvey’s name may now be on the wall but that doesn’t change his origins. He once wanted to extend his time at the D.A. He wanted to do it more for the honor than for the opportunities. The fractured relationship between Harvey and Cameron is explained. Evidence was withheld during trial but Harvey and Donna eventually learned about it. Harvey at first tried to bury it but Donna called bull. He was sty to sneak it as if it has always been disclosed. What he hadn’t expected was that Cameron would chew him out as well.

Cameron willingly withheld evidence and he got mad that Harvey tried to disclose it. He ordered Harvey to get rid of it. He almost did it. It was Donna that told him that if he started then he was never going to stop. For final confirmation for what he should do Harvey went to his dad and the older man warned him that Cameron will always ask him to bury once he knows Harvey was able to do it once.

Mike got the money for Trevor. Though it’s still not good. Trevor got busted for selling answers to a test. That’s how Mike helped him get the money. But he never wanted his friend to go down for what he did. He turned himself in to the Dean. He thought he would find a reasonable man but he found an irate father. Trevor has sold a test to the dean’s daughter and the dean was fired. As revenge the dean called Harvard to make sure Mike would never get in.

Harvey did turn in the evidence. Then he quit. He didn’t want to be anything like Cameron anymore. Later when he found out Donna had also quit he went by her place. He knew now that they no longer work together her rule on office romance wouldn’t apply any longer. They had one night together before he hired on his new firm. She agreed to the job if only they never talked about what happened between them.

Harvey admits he doesn’t like Donna with Stephen. They won’t make a big thing although it’s out there now.

Rachel came back to find Mike supporting her dream. He says he’ll explain it later on but he does give her his old acceptance letter from Harvard.

Harvey has one more thing to admit. He tells Jessica how he made a move against her; he ties to say he doesn’t want to continue however it’s too late. Jessica can’t listen to him justify his betrayal.