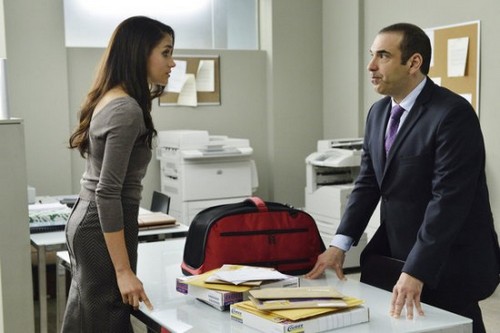 Tonight on the USA Network SUITS continues tonight with a new episode called, “She’s Mine.”  On tonight’s show Louis enlists Rachel in his battle with Nigel over a broken contract… and heart.  Did you watch last week’s episode? We did and we recapped it right here for you!

On tonight’s show Harvey clashes with Stephen over Ava’s case, among other issues. Meanwhile, things are still tense between Harvey and Jessica as they strategize how best to defend Ava. And Louis enlists Rachel in his battle with Nigel over a broken contract… and heart.

Tonight’s season 3 episode 7 looks like it is going to be great and you won’t want to miss it, so be sure to tune in for our live coverage of USA Network’s “Suits” at 10:00 PM EST! While you wait for our recap hit the comments and let us know how excited you are for the season 3 episode 7 of Suits tonight.

Harvey may have come clean to Jessica about his arrangement with Darby but that doesn’t mean his troubles are over. His new plan was to turn down Darby’s offer of outing Jessica like a gentlemen. However the fixer Darby supposedly sent to help him has just gone and given evidence to Cameron. The case was original locked tight. Then Stephen, yes Donna’s Stephen, track down a witness to try and bribe him. Cameron bugged his phone and found the witness through Stephen. The case is no longer looking so easy.

Harvey actually tracked down and rimmed Stephen while he was out on a date with Donna. Later Donna finds out what was so important that he pulled her date away. Secretly she still thinks he might be jealous. When she found out what Stephen did she was all set to be angry until he pointed out that work and whatever they are should be as he thought separate. What can a girl say a few dimples and she willing to forgive.

Now Jessica, Harvey, and Mike have to do everything in their power to stop Ava from going to jail. She had conveniently forgotten she had a phone call with the newest witness. She says it was a formality and nothing more. The witness is claiming the phone call was when she set up the murder.

Jessica is livid and she’s taken it out on Ava and the guys. But Mike knows why she’s really angry. It’s the same reason why she told them not to involve Stephen and Darby in Ava’s case anymore; she can’t get over what Harvey did by betraying her. Mike finally has enough and the moment he gets her alone he tells her that her anger is misplaced. She of course tells him to do his job by helping Ava. As if she would admit weakness in front of him.

Mike needs information on what Cameron had on Ava’s former protégé. He stages a scene at the D.A. office where he gets his hands on what Nick was be blackmailed with. Harvey reads it and it’s good. The information points a finger at Nick possibly being the one that set up the murder. They have to bring him back for questioning. Yet once they get their hands on him he claims despite the Swiss bank accounts Ava knew what he was doing. No he didn’t order the murders but Ava knew about the bribe and no court would believe otherwise.

During Ava’s serious investigation there is another trial although mock trial going on. Louis is suing Nigel over custody… for the cat. The cat, Riccardo, apparently was being babysat by Louis when Nigel was on vacation. But then Nigel returned early and Louis wasn’t ready to give her up. The day Harvey’s name went up on the wall, Louis went home. Riccardo had seen how depress Louis was so she brought him a mouse as a get well gift. Ever since then those two have built a solid bond. Rachel sees it so she agrees to defend him in mock trial.

The court case is ludicrous. Nigel brings in a former associate, Harold, as a witness. Louis sees him and immediately told Rachel they were screwed. Harold was in charge of taking care of Louis’s cat. Harold was allergic and the cat died the next day. Louis told Harold he might as well have hired Michael Vic take care of his cat.
Rachel though his able to turn the case around. Still she knows that Nigel loves the cat as well. Later she’s able to convince Louis to droop his case. Riccardo does belong to Nigel. In return for her helping him he gives her acceptance letter she got and he found. It seems Rachel is on her way to becoming a real lawyer.

Donna found out that Stephen used her to stick his nose back into Ava’s case. He copied the witness’s deposition. She’s angry enough to call it quits between them but she won’t tell Harvey what he did. She wouldn’t be able to take the embarrassment. She does tell Mike though. He caught her right afterwards. Mike couldn’t understand why Stephen wouldn’t back down so he looked into Stephen.

Harvey was right with his suspicions. Stephen came to sink their case. He was the one that negotiated the murders. He did it on Darby’s command without Ava’s knowledge on any of it. Mike tells Harvey, Jessica, and Donna how he planned it all. Donna can’t help but to apologize to Harvey after they hear the evidence. Seeing the tears in her eyes, Harvey decides to take action.

He track Stephen to the restroom and beats the living daylight out of him.