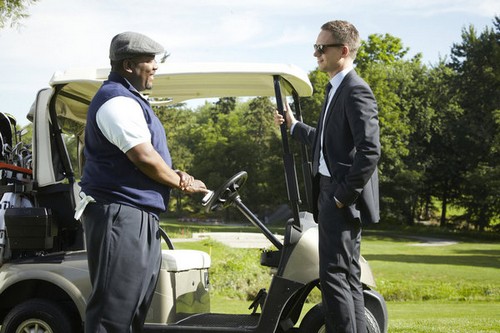 Tonight on the USA Network SUITS continues tonight with a new episode called, “Bad Faith.”  On tonight’s show Mike asks Rachel to take a big step forward in their relationship.  Did you watch last week’s episode? We did and we recapped it right here for you!

On last week’s show as Ava Hessington’s murder trial began, Harvey, Mike and Jessica fought off betrayal from both inside the firm and out. Meanwhile, Louis and Donna sought to even the score with those who had done them wrong.

On tonight’s show Pearson Darby Specter’s “divorce” brings trust issues to the forefront. Harvey finds himself battling Scottie once again, Louis convinces Jessica to let him handle the dissolution talks, and Mike asks Rachel to take a big step forward in their relationship.

Tonight’s season 3 episode 9 looks like it is going to be great and you won’t want to miss it, so be sure to tune in for our live coverage of USA Network’s “Suits” at 10:00 PM EST! While you wait for our recap hit the comments and let us know how excited you are for the season 3 episode 9 of Suits tonight.  Check out the sneak peek below of tonight’s episode.

Romance, or better yet success, is in the air. Harvey even took Donna out to celebrate with an early morning stop over at Hermes store. Even after all they’ve been through Donna can still wiggle herself into a second bag.

While back at the office, Louis has managed to work up enough courage to demand a job. He wants to handle the dissolution of the partnership. Darby and Jessica did break up last week. Although Darby doesn’t want to go like a gentlemen. He’s making outrageous demands and Harvey wants to handle everything, but Louis makes a compelling case. He tells Jessica that she and Harvey are too close to the matter to be objective.

To keep Harvey busy, Jessica sends him on a couple of errands. He can’t be around to harass Louis like he used to. Harvey and Mike need to snatch as many clients as they can from under Darby’s nose. Jessica does give the case but she goes one better by informing him of her plans. He has to pretend to be fair while everyone else gets dirty.

Louis has to play nice but that might prove difficult when he finds out he has to deal with Nigel. Katrina was supposed to keep him calm; however, after Louis sees all his letters to Ricardo he sends her out. He then did what he was specifically not supposed to do: He got the client list locked in negotiations. Harvey was just about to steal a client when Scotty informs him about Louis’s mistake.

Harvey sensed Louis failed and when he found out it was over a cat then it became simply too much. Louis has been asking for a chance to shine and the moment he got it, well, he immediately blew it. They have to rework another plan. Luckily, an option is still open to them. They can get their clients to pay earlier than planned.

Mike knows which company. He even knows the lawyer for that company. It’s Rachel’s dad. Mike visits him to fairly negotiate; though, it doesn’t take long before he gets knocked down. It seems everyone knows about the “divorce” and Rachel’s dad doesn’t want to get his own hands dirty in that business.

Mike hadn’t expected that but he’s willing to play every card he has — and that includes Rachel. Earlier he had been fighting with Rachel over little things but they got over it when he asked her to move in with him. All Mike says to the guy is that Rachel loves him and she wouldn’t like it if she were to hear her dad was just being a jerk because he can.

Louis and Katrina come up with a plan to redeem themselves as well. Unfortunately, no one is willing to take Louis seriously. To them, he is a nobody on the food chain. So his last chance just went up in flames.

Rachel was over at her parents’ house when her father told her what happened today. She’s upset at Mike even though her father actually started to like Mike after the stunt he pulled. Yet she feels that Mike was quick to use her. She’s going to need more time on about the whole moving in together idea.

Harvey was visited by Scotty. She wanted him to hold off on certain deals. She said that it would be the best for everyone. Harvey trusts her and so he convinces Jessica to stall, as well thinking they can all start playing fair now, but later Donna informs him that their huge deal with Hessington Oil just ended. They’ve been fired and Harvey is feeling betrayed. A lot of money is going to Scotty’s side.

Maybe Louis could help him. He has a great plan but can’t implement it himself. He needs Harvey to do it. Katrina says it would be for the best and Louis really does need a win. Harvey does take Louis’s plan. He tells him it’s brilliant and a matter of fact that Louis can come with him as he makes the deal. The two of them perform a wonderful and lucrative double team.

Mike wants to make amends to Rachel. He goes to her and is prepared to bare everything when she tells him she got accepted to Stanford.

Scotty in angered by what Harvey did. She said she never betrayed him and Jessica can actually prove it. They weren’t find because of Darby. Ava fired them and now she’s suing all of them for malpractice.