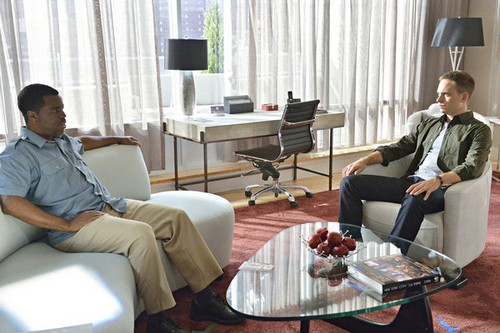 Tonight on the USA Network SUITS continues tonight with a new episode called, “Endgame.”  On tonight’s show Louis and Donna seek to even the score with those who have done them wrong.  Did you watch last week’s episode? We did and we recapped it right here for you!

On last week’s show Harvey clashed with Stephen over Ava’s case, among other issues. Meanwhile, things were still tense between Harvey and Jessica as they strategized how best to defend Ava. And Louis enlisted Rachel in his battle with Nigel over a broken contract… and heart.

On tonight’s show as Ava Hessington’s murder trial begins, Harvey, Mike and Jessica fight off betrayal from both inside the firm and out. Meanwhile, Louis and Donna seek to even the score with those who have done them wrong.

Tonight’s season 3 episode 7 looks like it is going to be great and you won’t want to miss it, so be sure to tune in for our live coverage of USA Network’s “Suits” at 10:00 PM EST! While you wait for our recap hit the comments and let us know how excited you are for the season 3 episode 8 of Suits tonight.

Not long after he pummeled Stephen, Harvey promises Donna he will make Stephen pay. It’s Donna that get to tell Stephen the reason why is office phone and computer aren’t working for a reason. Darby fired him. Darby hadn’t know what Stephen did to help Ava and after Jessica and Harvey informed him; he miraculously saw the error of his ways. What if he was pulled as an accomplice?

Mike wants to tell Ava what they found out but Harvey cautions him. Unless they have concrete proof bringing up Stephen will only hurt Ava. Especially with the amount of trust she has in Darby. No, they have to be patient. Harvey sends Mike in to investigate the star witness. If they can get him to crack then maybe they can save Ava.

However why would a guy want to incriminate himself? The D.A. was dumb enough to grant him immunity for turning on Ava even though Ava was never involved. Harvey tried a different approach. He tried to talk to Cameron. He appealed to Cameron’s white knight nature but Cameron won’t throw his whole case under the bus. Harvey overestimated him.

During trial Cameron uses his chief witness relentlessly. He goes to show the jury how his witness can’t be lying. If he was then he would be sent back home where he can expect nothing more than an execution. Harvey doesn’t interrupt his dialogue never mind that Mike really wanted him to. Later Donna is the one that speak to Harvey. She wants to know why he hasn’t thrown Stephen to the wolves yet. Earlier Stephen had implied that her precious Harvey was no better than him. He was simply a yes man that was never asked to directly give the order for murder. Wanting to prove him wrong Donna begged Harvey to be different. Get Stephen.

Harvey calls Stephen to the stand and on every question he got Stephen to plead the fifth. The right not to incriminate himself. Harvey tried to take a calculated risk but Cameron doesn’t let the jury sit on it like Harvey did for him. He got Stephen to admit that pointing out another suspect is what all defense attorneys do in order to protect their clients. Essentially Harvey’s ploy failed. The only thing Stephen did confessed to was Ava asking him to bribe witnesses.

Ava is pissed. Her lawyer risked her trial and her life. Then the man she treated as family was the one that got her set up for murder. Instead of trying to help he then went on to cover it up. Ava lost a lot of things today. Everyone feels like she’s going to lose. Jessica even goes to Harvey for drinks. They’re company is going take a hit so they might as well have a few. For Jessica to forgive him now only means there is no hope for their case. But doubt Harvey just yet.

In the meantime Louis has been taking out his loss, over the cat, on all the associates. Rachel tried to get him to shift the anger but she didn’t expect he would then target Harold. The guy he blames for his last cat’s death. He got a contract dispute against the guy and lowballed the offer. He thought he was getting revenge but Harold was smarter than he looked and pulled one over on Louis.
No one does that Louis and Rachel better not tell anyone. He could have had a quick little vendetta but now he’s going to make Harold work. He’ll tie up Harold in so many side cases on the one contract he won’t be allowed to do anything else. How will Harold’s new law firm like them apples?

Harvey’s last trick was to get Mike and the one innocent guy Cameron sent behind bars to come together and attempt to speak some sense to Cameron. It doesn’t work. At least not fully. Cameron is willing to make a deal. He’ll only give Ava eight years. Harvey and Darby don’t want her to take it. Jessica, though, does.

The have to come up with another plan. This tie Darby goes with Harvey to meet Cameron. He confesses entirely to his part and how he’s willing to be a witness in Stephen’s murder trial. Cameron grants him 5 years’ probation along with the clause Jessica added that says Darby is not allowed to practice in the US. Darby never saw it coming. He’s been ousted.
Rachel finally takes up the Harold issue with Louis. She tells him he treated a human being like crap. It seems Louis always saw Harold as his one failure. Rachel gets him to tear up the new contract Harold sent over and take Harold’s original offer. Harold deserves some respect.

In next week’s promo it looks like a fight between the London and New York offices. Who will in the second American Revolution?