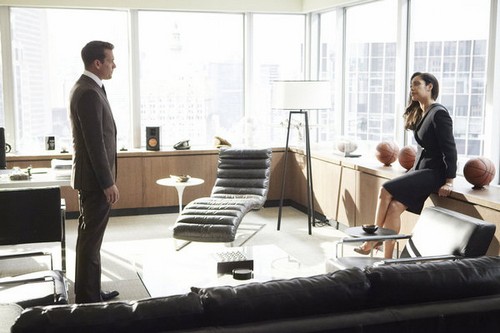 Tonight on the USA Network SUITS continues tonight with a new episode called, “Stay.”  On tonight’s show Mike and Rachel find themselves in Jessica’s crosshairs.  Did you watch last week’s episode? We did and we recapped it right here for you!

On tonight’s show an old nemesis returns to complicate the Pearson Darby negotiations and put Harvey and Scottie on opposite sides once again. Meanwhile, recruiting a new hire puts Louis in Sheila’s crosshairs, and Mike and Rachel find themselves in Jessica’s crosshairs.

Tonight’s season 3 episode 10 looks like it is going to be great and you won’t want to miss it, so be sure to tune in for our live coverage of USA Network’s “Suits” at 10:00 PM EST! While you wait for our recap hit the comments and let us know how excited you are for the season 3 episode 10 of Suits tonight.  Check out the sneak peek below of tonight’s episode.

The lawsuit has everyone on edge but Harvey is at least trying to protect someone from the fall out. He goes to Scottie and apologizes. He did after all think she tried to scam him. Yet just as he finishes his heartfelt apology he tells her too jump ship. She thinks its all part of a ploy but he really is concerned for her, Darby won’t be able to win this lawsuit and when it becomes known what he did then his firm will go down and take everyone in the near vicinity with it. That includes Scottie.

Right now she can find plenty of offers but if she stays then no one is going to want her afterwards. Harvey can barely protect himself but he wanted more for her. He had went to Ava’s people willing to testify against Darby as long as the suit against them was dropped. However Ava’s new lawyer Tanner rejects his deal.

Tanner is known for getting people under their skin. Jessica warns Scottie that if she’s going to be in the room during the deposition then she should she keep her cool. Tanner has gotten the best of people before despite Scotty claiming she’ll be fine.

As the gear up for the suit, Mike has his own problems. Rachel is seriously considering going to Stanford. Mike tries to tell her she could go to Columbia or somewhere at least closer to him but deep down she doesn’t want to. Why else would she be talking about long distance relationships?

Unfortunately what neither of them suspected was that Jessica would see them once and deduce the two are dating. Merely to confirm her suspicions she makes Donna accidentally reveal it. Jessica now knows what the others have all been trying to hide. Mike has told someone else his secret. This time he told a well-known lawyer’s daughter. Donna knows better than to tell anyone that Jessica knows and that was before Jessica’s warning.

Louis is deep. He’s trying to hire a new person on board but to do that he has to go through Sheila. The stunning and completely hot for him Sheila. This could have been a dream come true for Louis but the moment they try to return to work after a romp she’s no longer on board. As a matter fact she’s now going to blacklist from all potential hires. Louis is left wondering what just happened.

Mike tries going to Harvey for romantic advice only to be told that business and relationship should be kept separate. Mike figured the only way his relationship was going to last was f he ignored Harvey’s warning.

To be honest Harvey’s own entanglements with Scottie didn’t help either. They go in for the deposition with Tanner and he does get dirty. He brings up their relationship. Such as wondering aloud why Harvey slept with an engaged woman. Talk about hitting below the belt.

Louis goes to Mike. He wants to know if his connections can get them the new associate without Sheila’s help. It can’t but Mike points that Sheila is mad for reason. It may have flown right past Louis but Mike understood from Louis’s recall that Sheila wants a relationship. No more casual sex. Louis now has to figure out if he wants a relationship.

Day Two of deposition isn’t any better than Day One. Tanner tried to woo Scottie to his side but she must have turned him down. Day Two: he goes after her. It seems Stephen is claiming that Scottie was a part of the meeting between him and Darby. Luckily for her there is Donna. Donna convinces Mike to take her and see Stephen. They get him, through his own stupidity, to admit on tape that he lied about Scottie.

Harvey thinks now that they got rid of Stephen’s lie then Tanner would lay off of Scottie but he’s wrong. Tanner is going to continue to go after Scottie just so stick it to Harvey. Ava wants Harvey to hurt and Tanner knows the best way to do that is through Scottie.

Harvey tries one last time to get Scottie to leave Darby until finally she agrees. She goes to put some distance. She agrees to separate Darby and Pearson into two law firms.

Jessica never did forget about Mike and Rachel. She shows up on his doorstep with an affidavit. She wants Rachel to sign it and if she doesn’t then Mike get fired. Mike goes to Rachel and he tells her what Jessica did. He then tells her to take Stanford’s offer. It would best if she wasn’t near Jessica for the time being.

Harvey is the one that finds Mike down in the dumps. He did his best to comfort his protégé instead of celebrating his winning against Ava.

Mike is torn up over losing Rachel but what he doesn’t now is that Rachel is turning the affidavit into an advantage. She goes to Jessica and makes a deal. She’s going to Stanford and when she comes out she expects to see a job offer from Jessica waiting for her. Once that finishes she goes to Mike and tells him they’re not over. They can do long distance.

Harvey can’t even celebrate properly with Scottie. Their relationship isn’t as easy as he thought. He never gets past the “ I care for you” stage.

Louis does though. He tells Sheila they can be exclusive and she leaves to go call her mother. She let him in a room filled with records on Harvard graduate. Louis being bored decided to look up some friends. He found Harvey but never found Mike’s file.