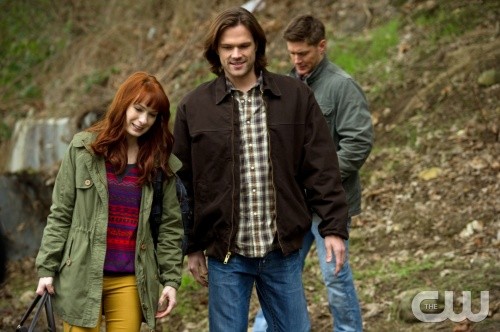 Tonight on the CW SUPERNATURAL returns with a new episode called, “Pac-Man Fever.” On tonight’s show While happy to see “her highness,” the boys suspect Charlie is hiding something; a secret that could get her killed. Did you watch the last episode? If you missed it you can read a full and detailed recap here!

On last week’s show Sam and Dean responded to a call from Kevin, who was terrified after hearing Crowley’s voice in his head. After hearing Kevin’s news, Sam and Dean teamed up with reaper named Ajay, who helped them deal with the second trial from the Tablet. Meanwhile, Dean received a visit from Naomi and realized he must find Benny and ask for a huge favor. Guy Bee directed the episode written by Eugenie Ross-Leming & Brad Buckner.

On tonight’s show DEAN INTRODUCES CHARLIE TO CHEAP PANTSUITS — Concerned about the physical toll the second trial took on Sam, Dean benches his brother from hunting until he heals up. So, when geektastic hacker Charlie (guest star Felicia Day) stumbles upon a case and finds the boys, Dean decides it’s time to teach Charlie how to be a hunter-in-training. While happy to see “her highness,” the boys suspect Charlie is hiding something; a secret that could get her killed. Robert Singer directed the episode written by Robbie Thompson.

Dean and Sam are back from Purgatory. At least officially but Dean waking up in 1951 seems a little bit like purgatory to him. Walking along the corridor, he finds all the staff murdered. What or who did it?

Taking back 24 hours earlier, Dean and Sam are relaxing at their place. Sam has been sleeping longer than he should. Dean’s so worried about him that he doesn’t want Sam to track down the elusive Kevin. Sam, stubborn as always, tries to convince him otherwise but fails Dean’s test.

Suprisingly Charlie is able to track them down; technically their 20 mile radius because their new home hides their location. She’s bringing them a case. However she’s a lot more knowledgeable now than before. She read the books. They’re online now.

She wants to go hunting with Dean. So he tests her out on the gun range like he did with Sam. Unfortunately for him, she’s a great shot. So she’s outfitted to pass as an FBI agent. Which does do any good when the coroner refuses to let them even see the body.

Dean is going to drive Sam up the wall with his constant calls. If only he knew that Sam is trying to force himself into getting better.

Two teenagers are hanging out when they come upon a dead body. For some reason they decide to poke the body’s squishy stomach. This causes it to explode open. But by the teenage screams; did something come out?

Charlie and Dean show up to the scene…and find Sam already got there. Dean tries to talk Sam into leaving while Charlie questions the teenagers. Something left a blue handprint on the body. They need to go to the coroner’s. But Dean ditches the other two. No worries though, Sam stole Charlie’s car.

At the coroner’s, Dean and Sam are checking out the body only to find its already gone. Meanwhile Charlie is distracting the coroner, who decided to return early. Returning to the boys’ place, they do some digging. Dean finds the creature only to have Charlie suddenly make a quick exit. The boys aren’t fooled.

Charlie, back at hers, is doing something shifty with her computer when she hears something or someone moving. She goes to check and finds nothing. Nevertheless when she turns around she finds out that their demon also happens to be the coroner.

Sam is trying to reach Charlie but can’t. So they track her down and find her place has been ransacked. When they get there, they find various passports. Yet when they checked her computer they find she’s been sending money to pay for a comatose patient, her mother. Apparently her mother was injured and her father killed when they were driving to pick up Charlie after a sleepover.

Charlie is held captive by the Djin/Coroner. It seems that the beast knew right off that Dean was a hunter and that’s why she insisted on paperwork.

Dean and Sam are able to find out about the coroner through their investigation and set out to hunt her. Dean finds an unconscious Charlie and the Djin finds a weaken Sam. Dean is able to stab it before it feeds off of his brother.

Their cure for Charlie doesn’t seem to be helping. This makes Dean drink something to make him enter Charlie’s dream. He just needs to be unconscious. So Sam hits him and he wakes in 1951. It wasn’t just any dream; this was Charlie’s nightmare.

Dean tries to reassure Charlie that he killed the Djin and she replies “both of them”. Back in reality, Sam finds the coroner’s son.

In Charlie’s dream, Dean tries to find a way out when he realizes that the patient they have to save is Charlie’s mom. Dean also happens to find Sam as a patient. Dean knows that only way for them to leave is for Charlie to let go of her mother. That’s the thing that holds Charlie back. Maybe Sam is what holds him back as well. Finally able to let go of her guilt, they return to reality where Sam already killed the teenager.

Charlie is leaving. She’s going to go to the hospital. She’s finally ready to let go of her mom. When she asks Dean if he’s ready to do the same; he answers “Never”. One of the last things Charlie does with her mother is to read to her the Hobbit.

On next week’s promo, the trials have taken a toll on Sam and he collapses. Is he ok? Will be ok after the trials or will they kill him? We’ll just have to wait and see.