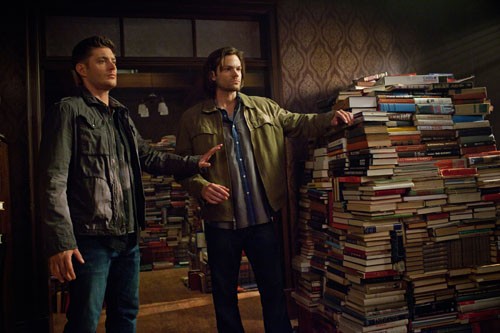 Tonight on the CW SUPERNATURAL returns with a new episode called, “The Great Escapist.” On tonight’s showCrowley (guest star Mark Sheppard) is on a winning streak. Castiel tries to elude Naomi (guest star Amanda Tapping) and the angels hunting him. Did you watch the last episode? If you missed it you can read a full and detailed recap here!

On last week’s show concerned about the physical toll the second trial took on Sam, Dean benched his brother from hunting until he healed up. So, when geektastic hacker Charlie (guest star Felicia Day) stumbled upon a case and found the boys, Dean decidesd it’s time to teach Charlie how to be a hunter-in-training. While happy to see “her highness,” the boys suspected Charliewas hiding something; a secret that could get her killed. Robert Singer directed the episode written by Robbie Thompson.

On tonight’s show when Sam and Dean receive a distressing video message from Kevin Tran (guest star Osric Chau), they set about trying to uncover the Third Trial. The boys make a discovery that sends them to a casino in Colorado, to find a mysterious recluse (guest star Curtis Armstrong) who may be able to fill in the holes in Kevin’s research. Meanwhile, Crowley (guest star Mark Sheppard) is on a winning streak. Castiel tries to elude Naomi (guest star Amanda Tapping) and the angels hunting him. Robert Duncan McNeill directed the episode written by Ben Edlund.

Kevin is alive. He’s back at home when Dean comes knocking. After spraying the boys with Holy Water (to indentify them), the boys give him a piece of the tablet. Kevin so enthralled by the piece of rock he doesn’t take notice when the boys leave. Maybe he should’ve because its wasn’t Sam and Dean but instead Crowley’s henchmen. Kevin is in a state of consciousness but still in Crowley’s trap. Is it Crowley’s special brand of purgatory?

The real Sam and Dean are at their command center. Sam hasn’t eaten on three days and Dean is worried. Sam tries to tell his brother everything is ok and they should focus on the third trial but Dean won’t let him do anything dangerous while he’s this weak. They get a message from Kevin. Kevin left a just in case message. Apparently Kevin’s dead. However his message sent all of his research to the brothers.

The boys , in particular Dean, are beating themselves up for Kevin’s death.

Castiel is at a diner when a tremor starts and makes him make a run for it. He’s running from Naomi’s men. Naomi is getting frustrated by her mens lack of success. They only way to catch Castiel is to make him stop running. So her men massacre everyone in a diner they know Castiel will visit. When Castiel does make it there, he does stop long enough to be caught.

Sam and Dean are investigating. Sam is able to pick up a symbol that means messenger of god. Dean doesn’t want him to go but nothing is going to stop Sam.

Sam and Dean stop off at a hotel. There’s something about the place and its not the unfriendly hospitality. Sam is hearing things. Later Dean comes back to their room only to find Sam acting weird. Dean makes his brother stay and rest while he goes out to investigate. He figures out that man, who checked them in, isn’t just an average Joe.

Sam left their room. His vision is blurry and yet he’s still trying to investigate. Luckily he was able to call his brother before passing out.

Naomi is confronting Castiel. She tells him how he has never done as he was told. Now she wants to know where the tablet is. Castiel can only tell her “Bite me”. Her men are beating him without any results. Just when she thinks to take even more desperate measures her men are killed. By Crowley.

Sam wakes up in tub of ice cold war. Dean had to bring down his temperature. Afterwards sam admits to hearing the man/being their looking for. Sam is connected to him/it.
Crowley’s had an angel on his payroll. He doesn’t kill Naomi but he does make her run. In the meantime he’s kidnapped Castiel. In grizzly and gore scene, Crowley was able to figure out where the tablet is. It was inside Castiel. Just when things are looking good for him, he finds out his men weren’t able to fool Kevin.

Sam tells his brother why he wants to continue with the trials. He was always worried that the demon blood had permanently dirtied him. The trials are a way to purify himself again. Searching the hotel the brothers walk into a room and are surprised to find someone pointing a gun at them. It’s who they were searching for. Although the angel doesn’t know who they are.

Castiel tries to talk to Crowley’s traitor but the guy refuses to listen. Still the guy doesn’t notice when Castiel pulls something else from out of his gut. He uses it to get rid of the traitor.

Crowley confronts Kevin and asks him how he knew about the guys. It seems the henchmen gave themselves when they were too polite.

The angel isn’t an archangel but someone on the lower level. He reveals what the archangels have been doing since God disappeared. They wanted to take over the world but they needed this guy’s help. So he escaped instead and has been hiding out ever since. He has been enjoying the humans’ books and stories. All of this ticks Sam of. Even Dean is upset that this guy didn’t come out of hiding to protect the prophet.

Kevin and Crowley are talking when Crowley realizes he doesn’t need the kid anymore. But when he tries to kill, he’s thrown across the room steaming. The angel was able to summon Kevin to him and the boys. The scribe of God is really powerful.

Dean wants to know if the scribe is with them or not. All he gets in return is that it’s the boys’ choice. The third trial is revealed. The newly awakened Kevin had manage to bring the tablet with him. The scribe says the third trial is to cure a demon.

As the boys are driving away, who do they find in the middle of the road but none other than a bloody Castiel.

On next week’s promo,Crowley is taking vengence. Who’s going to fall in his trap? We’ll find out next week.