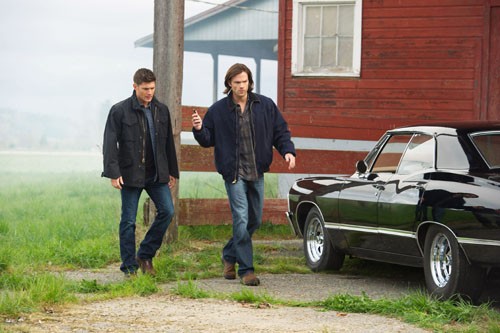 Tonight on the CW SUPERNATURAL returns with a new episode called, “Clip Show.” On tonight’s show Metatron (guest star Curtis Armstrong) enlists Cass to mull over problems at home. Meanwhile, Crowley (guest star Mark Sheppard) digs into Sam and Dean’s past. Did you watch the last episode? If you missed it you can read a full and detailed recap here!

On last week’s show when Sam and Dean received a distressing video message from Kevin Tran (guest star Osric Chau), they set about trying to uncover the Third Trial. The boys made a discovery that sent them to a casino in Colorado, to find a mysterious recluse (guest star Curtis Armstrong) who might be able to fill in the holes in Kevin’s research. Meanwhile, Crowley (guest star Mark Sheppard) was on a winning streak. Castiel tried to elude Naomi (guest star Amanda Tapping) and the angels hunting him. Robert Duncan McNeill directed the episode written by Ben Edlund.

On tonight’s show Sam (Jared Padalecki) and Dean (Jensen Ackles) reunite with Castiel (Misha Collins). Digging through the Men of Letters’ files, they stumble upon an undiscovered film which could be the key to the third trial. Metatron (guest star Curtis Armstrong) enlists Cass to mull over problems at home. Meanwhile, Crowley (guest star Mark Sheppard) digs into Sam and Dean’s past.

A couple are together a secluded cabin. He was a survivor of a Wendigo and that’s either made him paranoid or smart enough to know something is out there ready to hurt them. It seems he was smart but unfortunately he’s dead and the girl is left defenseless.

Dean is still pissed at Castiel for leaving but Sam manages to talk him down. They have to focus on the third upcoming trial. In their middle of their investigation they come upon a black and white video portraying an exorcism. The actually exorcism went wrong. The demon disappeared and the possessed died.

Sam and Dean track down one of the priests to understand the unorthodox exorcism. Although Castiel isn’t invited. Dean still doesn’t trust him. When they do meet the younger priest they find out that his mentor was torn apart several months into trying find a way to save both the demon’s and human’s souls. Sam isn’t looking too well. He’s been getting sicker since the beginning of the trials. Even the priest is worried about him but Dean assures the Father that Sam is doing just find.

Elsewhere, Castiel is making a nuisance of himself at the convenience stand. Before he make a scene about there not being any pie, god’s scribe tells him they need to talk. The scribe wants to socialize. He needs to talk about the chaos going on up there. Naomi isn’t as in control as she let on. The scribe wants to shut down heaven.

Sam and Dean are watching more of Father Thompson’s home videos. The father used his own purified blood in order to help the souls. In doing so he might have cured a demon. The boys want to test the priest’s theory with their own demon, Ms. Humpty Dumpty.

Castiel what to know how they could shut down Heaven. The scribe knows all the trials and secret levers. He’s the one who wrote it down. The scribe wants to combine his intelligence with Castiel’s strength in order to fix things. But it won’t be easy. The first thing they have to do is kill a child of an angel and a human.

The boys sow together their very own Raggety Anne demon. She knows what they’re planning. It was she that killed Father Thompson years ago. A call from Crowley of all people interrupts them. He wants the boys to read a certain article. The article about the young man they had saved from the wendigo years ago. When they return to the demon, they find out that she’s made a run for it.

Crowley is still hammering about the murdered young man. He sent over text messages of where the bodies are. The boys know it’s a trap but right now they need a demon. When they get to the scene they find another person that had helped now dead. Crowley is killing everyone whose ever met the boys. He wants to put an end to the trials and he wants Kevin back.

Sam follows Crowley’s further instructions as is confronted with Sarah, a woman from his past. Sam and Dean are doing their best to fortify Sarah’s location. Sam and Sarah are talking when he finds out she got married and had a baby. Despite doing their best, Crowley is able to get to her. He used a spell. The boys can’t help her they can only watch her die. What they didn’t know until Dean smashed the phone was that they carried in the spell.

Castiel and the scribe corner the nephelium but she isn’t as weak as they thought. She gives them a good fight prior to them getting the best of her.

Sam is feeling defeated when Dean tells him to snap out of it. They’ll find a way to take down Crowley; just don’t give up. Will they still being saying that as the body count rises?

In next week’s promo, the third trial is Crowley. He’s the demon they have to save but will they be able to do it?