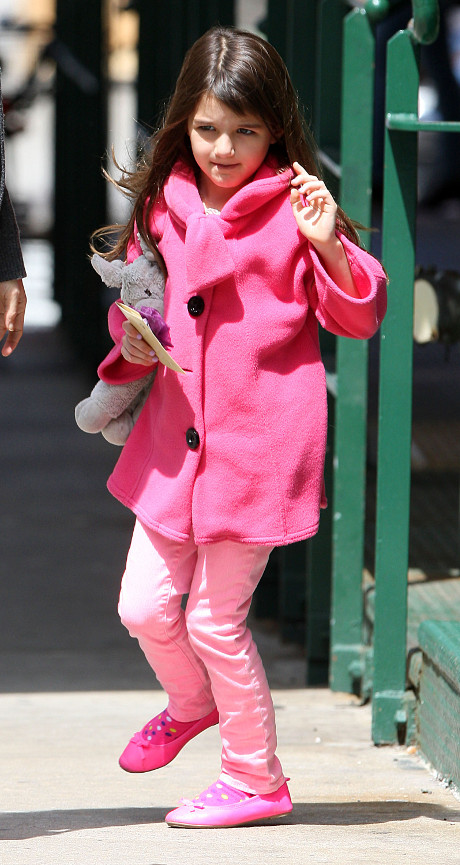 Suri Cruise was born into the spotlight and, with this new video that’s surfaced, we see that Katie Holmes‘ 7-year-old daughter is already getting fed up with the constant autograph seekers and paparazzi that won’t leave her and her mother alone. While walking out of a building in NYC to get to their waiting car, the two are bombarded with fans and paparazzi. Suri made it known that they’re trying to get to their car — and her tone suggests that she means business.

“We’re trying to get in the car… stop it!” Cruise first yells, followed a few seconds later with, “Get out of the way!” The horde continues to grow and not listen. Many of the onlookers pay no attention to Suri’s outlash, but one crude man has the balls to reprimand the innocent girl for her comment, saying, “Bye, Suri, you little brat!” Later, this same off-camera voice can quietly be heard calling her a “B***h.”

Wow, not cool dude. The girl is only 7-years-old and she’s bound to have little bursts of impatience, as is true with any child. The real child in this situation is the guy talking.

One guy in the video reprimands the verbal attacker, but not much else comes of the event. Katie and Suri eventually get in their car safe and sound. It truly is crazy the life celebrities lead, constantly being barraged by picture-seeking individuals. What do you make of this unfortunate story? Can you believe a grown man would act this way and harass a child? Leave us your thoughts in the comments section below.