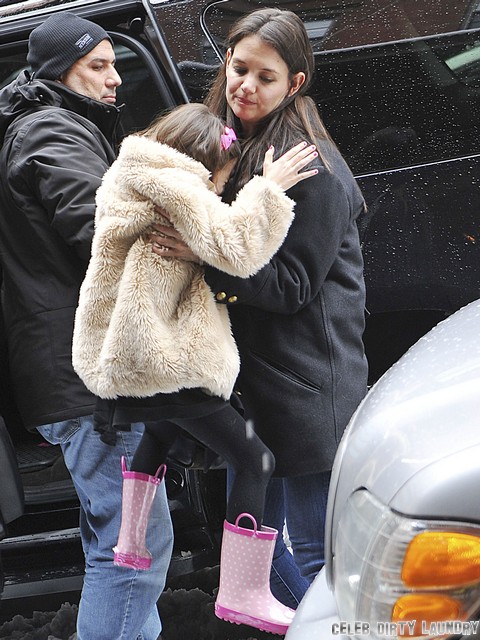 A strict schedule can mean everything in a young girls’ life and this past year has been one of radical changes for Suri Cruise. Since Katie Holmes decided that a cultish lifestyle with Scientology freak Tom Cruise wasn’t for her – or their daughter- we have seen Suri’s entire life transformed into something, still privileged, but kind of normal. Gone are the jet setting trips, child sized high heels and midnight dinners with adults. Now Suri attends a private school, dresses like an almost 7 year old and is spotted out with young friends.

Not so long ago the press was filled with new photos of Suri being carried everywhere by Katie and Tom ever referred to her as a “young woman” before she was able to write her name in cursive. Now we see a schoolgirl in Mary Janes, minus the big earrings and lipstick. It’s very clear that after stepping away from her controlled marriage Katie took her daughter’s upbringing into her own hands and the result is amazing.

According to the April 22nd print edition of Life & Style, Katie has decided to raise Suri a lot more traditionally, the way that she herself was brought up and the result already is a much happier child. Do you think that Tom is opposing how Suri is being raised in spite of how well she’s doing? When he split from Nicole Kidman Tom insisted on raising their kids as Scientologists. He lost that battle with Katie and I have to wonder if he is in total opposition in spite of the fact that Suri is doing radically better since her parents split.

Do you think being a single mom has turned Katie into a better parent? Tell us your thoughts in the comments below!