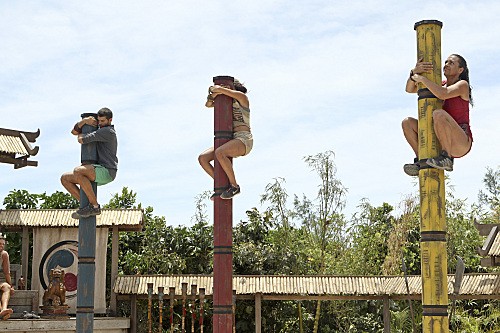 Tonight on CBS their Emmy Award-winning series SURVIVOR continues with another new episode called, “Skin Of My Teeth.” On tonight’s show the hidden immunity idol falls into the hands of an unlikely castaway. Did you watch last week’s episode? We did and if you want to catch up we have a full and detailed recap, right here.

On last week’s show an ultimatum at Redemption Island puts one castaway on the spot to prove his love. Meanwhile, another castaway’s honesty may have been her biggest downfall, and an odd man out needed to prove his worth on an all-female tribe.  At redemption island John finished in a clean first. Laura M and Kat were neck and neck. They tell Kat to look at Laura’s and she said it’s cheating but the tribes and Jeff tell her it’s okay. Laura M finishes second and Kat was out for good. Hayden cames down and hugged Kat as she cried and asked if he was going to break up with her. He consoled and reassured her.

On tonight’s show it’s do or die in a redemption battle that will leave castaways clinging for their lives. Meanwhile, a potentially game-changing blindside at tribal leaves one castaway on the outs, and the hidden immunity idol falls into the hands of an unlikely castaway.

RECAP: Vytas is excited because he thinks he is going to make it till the end now. Cathy B. is disappointed that the vote didn’t go the way she wanted and Vytas didn’t go home; she thinks it is only a matter of time now before the guys take out the girls.

Following the days duel, the winner will re-enter the game, the losers will be leaving the game. John knows that he has to win the duel and he has been training for it. Laura M. knows second place isn’t good enough and she promised her daughter she would get back to her.

It is time for the final duel, the three contestants simply have to hang onto a pole, that is it; sounds easy, but it is grueling in the heat. John is probably having the hardest time, he is slipping and he’s is out. John has fought so hard for so many days on Redemption Island and he is taken out by a pole challenge. Laura B. is now starting to slide, she is almost down, but has another grip. Laura B. is out of this game, Laura M. is back in and her daughter doesn’t look too happy about it, in fact she thinks her mom may ruin her game.

Jeff surprises everyone, the teams have merged; he also gives Laura M. an immunity clue and she decides to throw it into the fire.

The new tribe is altogether enjoying some amazing food that Jeff gave them; the tribe now have to work on a flag and come up with a new tribe name.

Ciera is blessed to have her mom back in the game, but she is still worried that she may ruin her game. They take a walk to the beach, she tells her mom that she has made a deal for final five and needs not to talk to anyone about game. Laura M. is so excited, she thinks that she and her daughter are in a power position in the game.

Tyson goes for a walk and finds an immunity necklace.

Tyson talks to Monica, makes her think they are taking out Aris; he just wants to keep her close to keep his options open.

Time for the first individual immunity challenge, tribal immunity is no more. Tribe mates want to get their hands on the new immunity necklace. Today their memory is going to be tested, Jeff will show them some images and they will have to remember them. Monica is the first out, Caleb and Katie are out, then Tina and Tyson. Then Hayden is out, there are only five left. Laura is the next one out, then Ciera. We are now down to three, a pair of brothers and Gervais; it doesn’t take long for Gervais to be out. It is now between the brothers, Aras is out and Vytas has won immunity.

Aras is thrilled that everyone thinks they are with him. Ciera’s game side is telling her mom to get out of the game play and she is struggling with it. Gervase’s alliance wants to vote out Aras, but it is getting a little tricky and he is worried that everyone may not be on the same page.

At tribal council, Jeff takes note of the families who are still together then asks if Laura M. is a swing vote; some think so. Meanwhile, Laura M. thinks that she may be a target because she just came back into the game. Gervais says that after tonight nothing is going to change for the smart players.

Time to tally votes, Jeff asks if anyone wants to play an immunity idol, nobody wants to.

The first vote is for Laura, the second too. Then two for Ciera, two for Aras. Another two for Aras, eighth person voted out is Aras. But, he has a chance to get back into the game as he is going to Redemption Island.