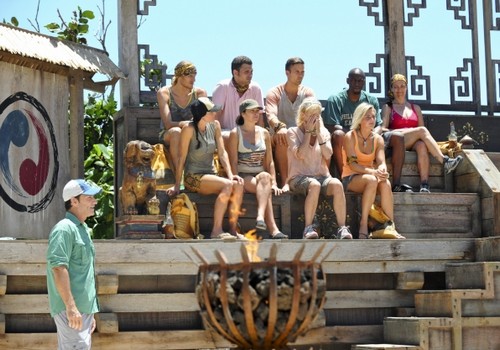 Tonight on CBS their Emmy Award-winning series SURVIVOR continues with another new episode called, “Rule In Chaos.”  On tonight’s show we are going to have the first redemption island competition of the season.  Did you watch last week’s premiere episode?  We did and if you want to catch up we have a full and detailed recap, right here.

On last week’s week’s show we met the 20 castaways who all had the same ultimate goal: to outwit, outplay and outlast and ultimately be crowned Sole Survivor.  10 of the castaways were from former Survivor seasons and they came along with their loved ones.  When the show opened the castaways were shocked to learn they would be separated from their loved ones and have to compete against each other on separate tribes.  By the end of the evening Rupert and Candice are on redemption island and Marissa was the first member of the tribe to be voted off.

On tonight’s show a new alliance of seasoned players targets one of their own. Meanwhile, the old Colton rears his head and tries to disturb the peace at camp.

Marissa makes her way to Redemption Island to meet Rupert and Candice, Marissa isn’t taking it too well that she’s been voted out; now there are three in Redemption Island, Candice believes that Marissa was voted out because of standing up to Brad. Now its morning and the Galang Tribe are giving each other a massage in some sort of centipede mentation, though it seems like yoga. Laura is upset being alone without her husband Rupert, Colton is acting like a spoiled brat and many people are hoping that Colton will change his ways from the last time he played.

The Tadhana tribe are fishing for food, Brad is happy to have gotten the flint from last night; Brad goes on about how important fish is. Rachel is worried about alliances being formed and knows that Brad voted out Marissa because she wasn’t up to par with the tribe, Ciera is worried about Rachel making an alliance with the males, especially with John and she finds it weird that she’s not trying to make one with fellow woman. John reads about the next challenge that’s coming up for the people at Redemption Island, he’s not feeling too good about leaving Candice to fend for herself.

All tribes appear and are seated ready to watch the challenge between Candice, Rupert and Marissa to start; four contestants are already in tears. Rupert, Candice and Marissa appear and look ready to fight to stay. Gervase is acting very competitive and I’m already liking this guy, when Marissa makes a comment on how it’s his fault that she’s there fighting to stay. The challenge doesn’t look too simple, they need to get spools to the top of some contraption, though that’s not all its sitting on a spring; if they move the spools wrong it will send all of them to bottom.

Straight in the start Rupert rushes with one, but sadly it fell off as it got to the top; Marissa and Candice have a steady pace and are doing pretty well. Rupert has his eight stack spool tower leaning and looks very dangerous, sadly the entire stack fell over due to how bad he place them. Candice is still doing very well, but due to the wind her stack almost fell, but she won. Now Marissa and Rupert and fighting against each other, sadly Rupert is far behind and might be going home, Marissa is trying to place her last spool and it stays. Rupert sadly has lost and will be going home straight in the beginning; he sacrificed himself so that his wife Laura can stay in the game. Rupert has no regrets with the decision he’s made, but you can tell that he’s a little disappointed in being the first to leave this time.

Candice now gets to decide who gets a clue to where the immunity is located at and decides to give it with John, Candice and Marissa live to see another day and all the tribes are headed back.

Tadhana tribe are congratulating John’s wife winning the Redemption Island challenge, John wants to switch their tribe members to get someone who’s played the game on the other tribe; he wants to have Tyson to join their tribe and switch for him with Rachel, Brad believes that it’s a curse and a blessing for John to have the clue, for it will make people skeptical about him. John plays it smart with keeping the clue to himself and decides to try and find it himself. Galang tribe are consoling Laura since her husband Rupert left; Colton is going back to his old ways and is starting to want to run the show with great strategy. Kat doesn’t want to play against Colton, because she knows that he likes to turn people onto each other.

Colton admits to becoming a raging bitch when he gets angry, Kat talks to Colton about him strategizing with Tina before. Tina doesn’t want to deal with the upcoming drama, Colton talks to the entire tribe saying that he doesn’t want to be the same as he was the last time he played. Colton wants to get slaughtered at the next challenge to show his team what losing is about, to show them that this is a game. Colton woke up in the morning feeling that his entire tribe is acting sketchy; Monica tells Colton that he needs to calm down a bit. Tribe members are talking about Colton, they all know that Colton likes to turn everyone on each other; they all agree that he’s being a bully. A new alliance has formed with Tyson, Gervase, Monica, Tina and____.

All the tribes come together for the next challenge, this time their playing for a ton of fishing gear that will help them with their survival. Kat is sitting out for the challenge this time. The challenge consists of three tribe members pushing another tribe member in a barrel to get a certain number of bags. Tadaha has a great start in the challenge with Galang straight behind them; so far it’s anyone’s game at this point. Galang was quicker at getting their bags and are now in the lead and Tadaha is behind. Galang is now not in the lead, Tadaha has taken the lead but are doing great with getting the balls in the hole; Gervase is doing very well for his Tribe Galang and has gotten three balls in quick, now both are tied with four balls, but Gervase goes and kicks Tadaha’s ass with his ball handling skills. Galang wins again, Tadaha will need to vote out another member of their tribe again tonight, Galang’s knight in shining armor Gervase has save them all and gotten his tribe fishing gear.

It seems that everyone are planning to vote for Rachel and John tells Ciera that he’s going to tell Rachel to vote Ciera out; while the entire tribe will be voting for Rachel to go. John is isolating himself from the tribe a bit; to look for the immunity with the clue he’s got. The five guys of Tadaha are worried about their alliance together, especially with John. All the tribes get to elimination; Jeff speaks about the ratio of women to men. It seems that the Tadaha tribe is worried about if John has immunity now or not.

The voting begins starting with Rachel, it seems like Rachel is going to most likely be leaving Survivor for sure; everyone looked like they were dead set on it. Jeff goes to tally the votes, Immunity isn’t brought up. Rachel is voted out of this season of Survivor; John is going to be getting skeptical with seeing his name showing up twice is the votes. Rachel makes her way off of the show; Jeff tells Tadaha that they need to win the next challenge.

Rachel makes it to Redemption Island and blames it for being male dominant, and that’s why she was voted out.