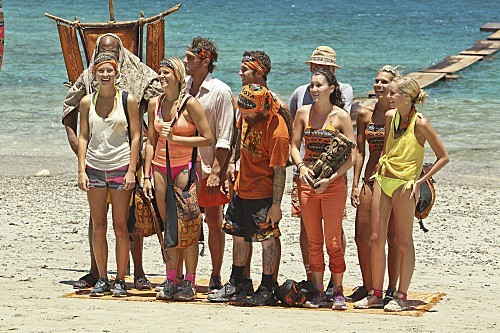 Tonight on CBS SURVIVOR CARAMOAN – Fans vs Favorites returns with a new episode called, “Honey Badger.”  On tonight’s show apparently Brandon goes all Hantz on us and I cannot wait to see.  Brandon says at one point that he fees his Uncle’s blood running thought him… sounds like he is going to be up to no good.  Did you see the premiere episode last week?  We did and we recapped it here for you!

On last week’s premiere episode – in a special 90-minute premiere, the 20 castaways were split up into two tribes, “The Bikal Tribe,” made up of former players deemed favorites, and “The Gota Tribe,” comprised of ultimate fans of the game.  Francesca complained a lot during the show that she did not want to be eliminated first again.  On her first stint with Survivor she was the first to go.  She actually said if that happened this season she would eat a rock.  That should have told us everything.  At the vote – six votes Francesca and four votes for Andrea, Francesca was the first person, again, to be voted out. Andrea is safe, but I doubt for very long.  Meanwhile, Francesca did not eat the rock ;-)

On tonight’s show following the first elimination of the season, Brandon targets Dawn as the leader of what he sees as an unsuitable vote and matchless teamwork and disorganization from one tribe leaves little room for competition during a tiered Immunity Challenge. 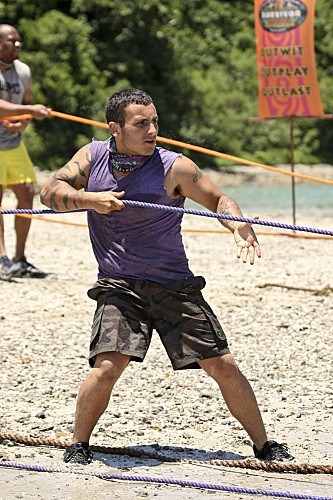 RECAP: Brandon is upset that Francesca got voted out and Dawn doesn’t like his attitude to the point that she is reduced to tears. Dawn compares the way Brandon spoke to her to “pollution”. Meanwhile, Brandon is really upset and wants to go Russell Hantz style; play dirty and go out with a bang.

Shamar is still laying low and not doing that much, the idiot thinks that if he lays low, he won’t get voted out.

It’s day 4, on Bikal Brandon is thinking of sabotaging everything, but he woke up and decided he would be known as a quitter and can’t do it. Phillip thinks Brandon is narcissistic, there is something he finds very disturbing about him. Then Brandon goes around the camp and tells them all that Phillip is crazy and pulling a “Boston Rob” on everyone. In private, Brandon calls Phillip “Agent Pink Panther”.

Time for the Immunity Challenge, three members from each tribe will swim out on a raft that is being pulled by three other of their tribe mates. Once in the water, the three members have to collect nine rings, the favourites are in the lead. Fans are really struggling to get something going when the favourites are already half way back. Favourites now only have to land three rings on a post to win and Malcolm is doing the tossing. Fans are on their way back, they are still in the water. Fans are back in the game, Michael is tossing for them while Phillip has taken over for the favourites. Phillip scores, favourites win immunity and the reward; fishing gear. Fans are heading to their first Tribal Council where one of the ten of them will be the second person voted out of the game. Reynold wants Shamar to go, he thinks it is an obvious vote because of how lazy he is.

Phillip is still giving everyone nick names, Malcolm is the Enforcer, it is making the rest of the tribe mates laugh but you now they really think he is crazy.

Fans are analyzing what they all did and some are thinking that Shamar threw the challenge but he doesn’t care what they think because he has an alliance and believes that without a doubt that he is safe at Tribal Council. Matt and Michael have a strong bond and think they should both go with Hope, Allie and their guys against Shamar. Matt is trying to campaign against him, but Sherri doesn’t want him going anywhere because he is in her alliance. Laura meanwhile wants to get Allie thrown out because she thinks she is a strategic threat. Reynold seems to be the only one interested in finding the Immunity Idol and guess what, he finds it. He is so happy, this is freaking nuts and Reynold has no intention of telling anyone about it, he is going to be smart about this.

Time for Tribal Council, the tribe mates start by lighting their torches. Jeff asks Matt if he is concerned about the four young tribe mates being close. Then he moves over to Shamar how he is doing and he says he is trying to conserve his energy because he doesn’t get much food. Michael reveals that at the challenge they didn’t make good decisions and it caused their failure. Michael blames the failure on Shamar because he doesn’t do anything but shout out orders. Shamar says that he is an outcast because he is big and loud. Laura reveals to Jeff that she saw a bulge in someone’s pocket and won’t say who, but looks directly at Reynold.

Reynold tells Jeff that he does indeed have the Immunity Idol and brought it with him to Tribal Council, just in case. Shamar says that Reynold deserves an Academy Award for his performance. Laura tells Jeff that she is voting with her gut, maybe.

Jeff asks if anyone has an immunity idol and wants to play it, they should do it now, nobody does. Time to read the votes, six votes Allie and four votes Shamar, the tribe has spoken, Allie is the first person from this fan team to be voted out.