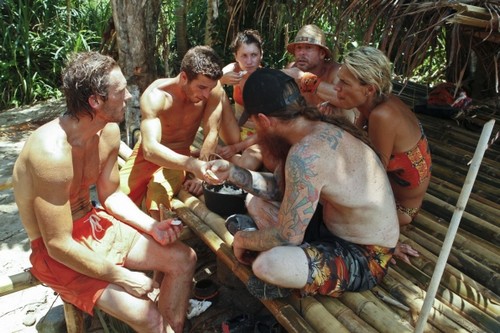 Tonight on CBS SURVIVOR CARAMOAN – Fans vs Favorites returns with a new episode called, “Persona Non Grata.” On tonight’s show on team member stuns his tribe & reveals his hidden desire to sabotage their camp.  Did you see the premiere episode last week?   We did and we recapped it here for you!

On last week’s show a medical emergency ended the game for one contestant, Shamar.  I am sure his whole team breathes a sigh of relief he was so lazy.  It got so bad that he told his team last episode he was going to stay in the shelter all day and sleep and they would have to bring him rice.  If they did not, he was going to quit.  Good riddance to him!  At tribal council the fans headed back again.  Reynold played the immunity idol, therefore any votes for him, did not count. Laura got four votes, that is enough for her to be voted out. Reynold didn’t have to play the immunity idol after all.

On tonight’s show the Favorites must contend with an out-of-control Brandon when he stuns his tribe & reveals his hidden desire to sabotage their camp, leading up to a meltdown.  Brandon gets upset at Philip and Jeff Probst says it is a history-making moment.

RECAP: Sherri thinks it was a real hard decision having voted out Laura, but she had to go with the tribe because they were going to vote for her no matter what. Reynold is not trusting anyone at this point, he played the idol last Tribal Council because he didn’t trust anyone. Meanwhile, Matt doesn’t think it was a strategic move, Reynold playing his idol, he had no choice.

Brandon is thinking about his family and feels completely selfish that he is on the island and away from his children – he thinks every day is a waste and at the next Tribal Council he is volunteering to leave the game.  Brandon goes on to tell everyone that he was going to pee in the rice and burn the shelter down because he wants to leave anyway – clearly he is spinning out of control and it is only a matter of time before he snaps. Brandon’s motivation to be on the show were selfish, but now he has had time to think, he is going to tough it out and play the best game he can.

Time for the Reward Challenge, two members will hold on to a rope that is attached to a net, the opposing team will toss coconuts in the net and the first team who can’t hold it up will lose. The reward is a barbeque. Phillip and Brandon are holding their ropes, Matt and Michael holding theirs. Brandon is the first person out, then Matt. It is Phillip against Michael, who will win? Phillip wins for Favourites.

Eddie can’t believe they lost the challenge and Sherri is pissed that everyone thinks they need to keep the muscle around, this makes her go in search of the other idol to secure her place in the game. Meanwhile, Matt is also looking for it and if he finds it, he’s not telling anyone. You won’t believe this, Reynold has found the second idol, unbelievable! Will Reynold keep is mouth shut this time? No, the first chance he gets, he tells Eddie.

Over at the Bikal tribe, everyone is enjoying to prepare the food for the barbeque feast. Brandon is pissed that Phillip is taking 100% credit for winning the challenge, actually, Brandon is really getting aggravated. Brandon gets into an argument with Phillip and calls him a dictator, meanwhile, the rest of the tribe thinks Brandon is unstable and unpredictable.

Phillip is furious and thinks Brandon is a young punk who should be thrown out of the game. Brandon is trying to keep control, but is finding it a hard thing to do and even though he tries to make peace with Phillip, but are faking it.

It has been raining for two days, camp life has not been good at Gota. Eddie has caught a head cold, it is now 48 hours of rain. Meanwhile at Bikal, Brandon is really losing control, he calls Phillip a punk ass *itch. Phillip wants to throw the challenge, so they can get rid of Brandon. Surprisingly, Brandon is getting so crazy that Phillip looks like he is afraid of him. Andrea tells Brandon that Phillip wants him out and this rubs Brandon the wrong way. Brandon confronts Phillip and tells him that nobody on the tribe likes him, Brandon then goes over to the rice and dumps it all in the sand and then throws down a couple of chairs. Brandon just keeps ranting and calling Phillip a *itch. The rest of the tribe is worried, especially Dawn who wonders if he can even stay in the game.

Time for the immunity challenge, Jeff asks Reynold what was the impact of the rain on the tribe. Reynold says it was rough. Brandon tells Jeff that he had an outburst in the morning, then he tells Jeff that he want to talk to the tribe. He tells them not to let Phillip win the game. Corinne asks Jeff if they can forfeit the challenge and go right to Tribal Council. Brandon intervenes and Jeff pulls him away from the tribe, to put distance between them. Brandon says that Phillip gave everyone plastic doll names, making fun of everyone. He goes on to say that Boston Rob got Phillip through the last game, he did jack shit to get where he did. Jeff is concerned, he feels that Brandon is hostile. Brandon has a bad case of verbal diahrea and puts down his whole tribe. Jeff asks Phillip what he thinks, just when Andrea starts to cry – she says that she got really close to Brandon and two see two people fight and say mean things to each other hurts. Brandon jumps in again, he calls Phillip names and screams at him to shut his mouth, Brandon starts to approach Phillip and Jeff pulls him off.

Jeff announces an immediate Tribal Council, everyone votes, some of the women are crying and Brandon is out. Jeff warns Brandon to walk away and cool down, he doesn’t want him going back to camp. As Brandon is leaving, he calls Phillp a *itch and everyone breathes a sigh of relief that is leaving. Clearly this was not an easy decision for the tribe, but you know what they say, “the apple doesn’t fall far from the Hantz tree”, like nephew, like uncle.

The fans actually come out the winners in this, they don’t have to compete in the challenge and risk losing a tribe mate.

Next week we can look forward to a battle between Corinne vs Phillip and the merge is around the corner.