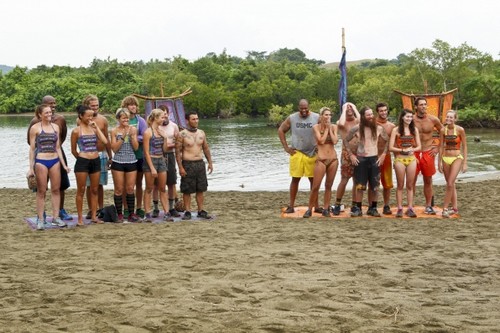 Tonight on CBS SURVIVOR CARAMOAN – Fans vs Favorites returns with a new episode called, “Kill or Be Killed.” On tonight’s show after suffering a medical emergency, one Castaway’s ability to play the game is in danger,. Did you see the premiere episode last week? We did and we recapped it here for you!

On last week’s Philip was happy because he was 54 years old and he was having the time of his life.  He was also totally full of himself and thought he was impressive.  Also the episode was billed as very intense because Shamar the Iraq war vet had a meltdown, actually he had several.  The camp was in total chaos and Brandon acted like he was losing it.  Nothing new there!

At tribal council last week nobody played the immunity idol. The first vote was for Shamar, then some for Hope, it was a tie, 3 to 3. Three votes for Eddy, it was a three way tie. Everyone had to vote again, but this time only for the three that were voted for.  Hope got four votes, she was the third person voted out.

On tonight’s show a medical emergency may end the game for one contestant.  Jeff Probst has teased that on tonight’s show the medical team and Jeff are called to check on one of the castaways.  No word yet on which survivor it is.  Who do you think it is?  Who are you rooting for?

RECAP:  Brandon took nine days to breaks Phillips alliance, he’s in with him now and Phillip has nicknamed him The Conquer. Time for the Reward Challenge, each tribe will select two tribe members to stand on a platform and the rest of the tribe mates  have to untie planks and transform the tribe maters from one platform to the next platform where all tribe members have to swim to the final platform and all get on, it is very close, both teams are neck and neck. The winner of this challenge is Favorites, a local bushman is going to visit them and bring them a chicken and other staples and help them to live off the land.

Nothing could have prepared the tribe for this guy, he is 60 years old and 4 feet tall and he prepared a whole feast for the tribe.

Meanwhile, the other tribe Is furious with Shamar who is still sleeping the day away. The other day Shamar wanted to quit, but he stayed and now he wants to only sleep and be served rice.

A hurricane has hit and with it, rats! The tribes had a tough night but nobody more than Shamar who got sand in his eye and now it;s irritated. Jeff arrives with a boat and the medic team to check Shamar’s eye. The medic team puts a dye in his eye to check it out and make sure there is no damage. The medic team wants to pull Shamar out of the game because they think he should see a specialist. Jeff calls in the rest of the team and announces the news to them and although they do look really concerned, you know inside that they are thrilled that Shamar is leaving the game. because he has proven to be extremely lazy and disrespectful.

Time for the Immunity Challenge, fans are down to seven with Shamar gone. Immunity is back up for grabs, the tribes need to run in the one, one by one, collect five keys and bring them back and open up a chest where they find bean bags that they have to toss at blocks. Once the blocks are all knocked down, they will Immunity and it is is Phillip who wins it for the Favorites. The Fans are headed to Tribal Council where someone will be voted out.

Eddie and Reynold have a huge target on their backs and need to come up with a plan if they are going to stay in the game. Matt wants to get rid of Laura, but Michael is not to sure if it is a good mood even though Eddie and Reynold are the stronger players and can do more for them in the long run.

Matt goes around camp and campaigns to get rid of Laura because she is the weakest link and he thinks they are losing because of her. Meanwhile, Laura is worried because she has heard her name tossed around.

At Tribal Council, Jeff asks Matt how things are around camp, he admits it is better, less tension. Reynold tells Jeff that there is a strong alliance of five and they should be keeping the strongest tribe members, being him and Eddie. Reynold goes on to say that the tribe is prioritizing losing and not winning with their alliance. Eddie says that Laura is the weakest person on the team, but she knows how to play that alliance, what she lacks in braun, she gains in brains if she is still there after the vote.

Time to play the Immunity Idol, Reynold plays it therefore any votes for him, don’t count. Laura gets four votes, that is enough for her to be voted out, guess she lacks in brains after all. Reynold didn’t have to play the immunity idol afterall.