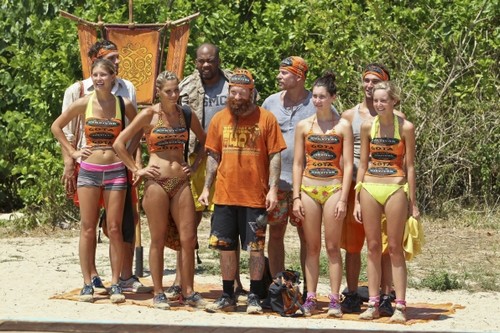 Tonight on CBS SURVIVOR CARAMOAN – Fans vs Favorites returns with a new episode called, “There’s Gonna Be Hell To Pay.” On tonight’s show Corinne and Malcolm’s special bond leads to a discovery that could liven up the game, and alliances shift and unrest ensues just before an intense Tribal Council. Did you see the premiere episode last week? We did and we recapped it here for you!

On last week’s premiere episode following the first elimination of the season, Brandon targeted Dawn as the leader of what he saw as an unsuitable vote and matchless teamwork and disorganization from one tribe left little room for competition during a tiered Immunity Challenge. At tribal council there were six votes Allie and four votes Shamar, the tribe hads poken, Allie was the first person from this fan team to be voted out.

On tonight’s show Philip is happy because he is 54 years old and he is having the time of his life.  He is also totally full of himself and thinks he is impressive.  Also the episode is billed as very intense it looks like Shamar the Iraq war vet has a meltdown.  The camp looks like it totally in chaos and Brandon looks like he is losing it.  At one point he says he will, “burn the shelter to the ground.”  Yikes!

RECAP: Renold is upset that Shamar didn’t get voted out.Sherri tries to convince Shamar to lay low and stop ruffling feathers. Meanwhile, Shamar is questioning if he should even be in this game.

Corinne has aligned herself with Malcolm and the two go in search for the idol, they find it. Andrea wants Corinne out and tries to campaign with Phillip. Andrea then goes to all all the other tribe members and tells them the same thing. Brandon has been told that he is safe, but he is having a hard time believing it and if they target him, he will pee in the rice or burn down the shelter, there will be hell to pay in camp.

Shamar has only thoughts of quitting, this guy is so pathetic, I wish he would just leave already. Other than sleeping, eating and complaining, Shamar hasn’t done much else. Sherri doesn’t want Shamar to quit, she thinks he is really going to regret it. Reynold wishes Shamar would just leave, but it seams like Sherri talked him into staying, for at least a few more days.

Time for the Immunity Challenge, both tribes have to swim out to the water to a bamboo cage, they after dive into the water and find a chest. Then, the chest has to be brought to the beach where they will use grappling ropes to drag the chest across a platform.

Everybody is in the water and there are strong swimmers and not so strong swimmers on both. The thing is, they are not allowed to drag the chest to the beach until all the tribe members reach the cage. Favourites are first, they have to untie the front door of the cage underwater. Fans open their door first, but Favourites are just behind them. Both teams are on the beach and they now have to build a platform that they drag the chest across. That’s it, Favourites win immunity and a comfort reward which includes a tarp, chairs and a pillow.

Shamar curses Reynold who is wondering what more Shamar is going to do before they throw him out. Laura can’t believe how pathetic she was in the challenge, she really blew the swimming. Sherri is trying her best to control Shamar so she can one by one get everyone out and everything will go according to her plan, as long as he keeps his mouth shut.

Hope is concerned that she is going to be voted out, but Shamar assures her that he won’t vote for her. Julia can’t believe that Shamar told Hope the plan, in splitting the vote and it appears that his big mouth is now getting the to turn, against him.

At Tribal Council, Reynold tells Jeff that there was a lot of screaming after the last Tribal Council by Shamar. Jeff asks Shamar about his temper and he claims that he is misunderstood and being picked on. Hope tells Jeff that Shamar told her that he was 99% sure that she was going home tonight. Matt thinks Shamar gets carried away with his attitude and his personality gets on everyone’s nerves. Shamar says that people take what he says and exaggerates on it. Sherri tells Jeff that she understands Shamar because she has met a lot of people like him before. Jeff asks Hope and Eddy if they are concerned they might be voted out, both are worried, but they think it should be Shamar to go home. Jeff asks Reynold if the Idol is important and he says it’s almost like a poker game.

Time to vote, nobody plays the immunity idol. The first vote is for Shamar, then some for Hope, it’s a tie, 3 to 3. Three votes for Eddy, it is now a three way tie. Everyone has to vote again, but this time only for the three that were voted for.

Hope gets four votes, she is the third person voted out.