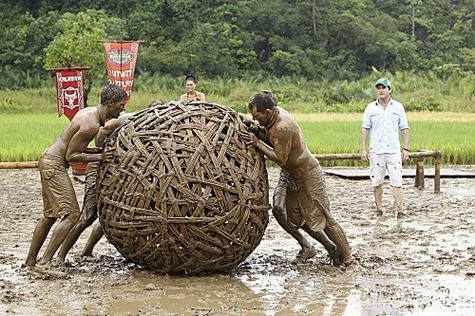 Tonight on CBS SURVIVOR Philippines airs with a whole new episode called “Down and Dirty.” On tonight’s as castaways get down and dirty to battle it out for a fruitful feast. If you missed last week’s episode we have a full and detailed recap for you here!

On last week’s show a twist in the game caused a shift in tribe dynamics. Meanwhile, as conditions worsened at camp, one castaway was faced with a game-changing decision. At Tribal Council, Jeff thought that losing Dana caused them to lose the challenge. Dawson thought Denise should be kept on the tribe because she was a strong player, she also thought they should keep her because she is optimistic and positive. When Jeff read the votes, Denise 1, Dawson 4, that’s enough, the tribe spoke and Dawson headed home. First Tribal Council and first blind side for this tribe.

On tonight’s show as castaways get down and dirty to battle it out for a fruitful feast.  Lisa Whelchel, 49, who played Blair on the Facts of Life ends up wrestling with sex therapist Denise Stapley, who is arguably the strongest woman in the entire competition.   In an unprecedented move, opposing tribes take to the bargaining table to strike a deal mid-challenge.

Tonight’s episode: Katie feels like she is on the bottom of the totem pole and the weakest link and intends on pinning everyone against Penner so she can make it to the merge.

Meanwhile, Mike is depleting the rice supply because he eats it raw. Artis is upset, he wants Mike to go home if Tandang loses the immunity challenge.

It’s time for the reward challenge, three members from each tribe have to push a huge ball through a goal while the other team is doing everything they can to stop them. Reward is a trip to a dry hut for lots of food and a shower. Tandang has two extra players, RC and Artis sit out.

The teams have been out there for one hour with no movement. Kalabaw wants to make a deal with Tandang, if they let them win they will give them all their rice. Artis doesn’t want anything to do with it, he just wants to win. Majority wins, Kalabaw wins and gives up all their rice.

Kalabaw has had their showers and are chowing down on tons of food and the tribe is hoping that this will give them some momentum. Jeff loves the food but he thinks the fact that they have no rice is going to only take a few days to get to them. The tribe is given letters from home and nobody is immune to tearing up.

At Tandang, Artis is furious with RC who encouraged the tribe to take the deal. Abi-Maria calls the deal the dumbest move ever in Survivor history by giving up the reward.

At Kalabaw, Carter didn’t like the deal because there is no guarantee that they will catch fish.

It’s time for the immunity challenge, one tribe member has to launch a ball while the other members try to catch it in a net, while the balls are launched, they are up for grabs.

Penner scores, then RC, Tandang is in the lead with two, Kalabaw needs to pick it up. Jeff has two catches for Kalabaw and the score is climbing. The score is a tie, 4 for each tribe. It’s the last score by Malcolm, Tandang wins immunity.

Kalabaw has to make a decision on whom they are going to send home, Jeff thinks they should make a big move and get rid of Penner but Carter thinks it would be good to take him to the merge because nobody wants a returning player to win. Meanwhile, Penner wants to get rid of Katie.

At tribal council, Denise thinks she may just be going home because she is the new tribe mate on the block. Jeff says that there is not a vote that is not going to be a blindside while Penner thinks it is easier to blindside someone but he hopes it won’t be him to be blindsided.

Time to vote, Kate 3 votes, she is sent home, Penner didn’t get his blindside, there’a always next week.