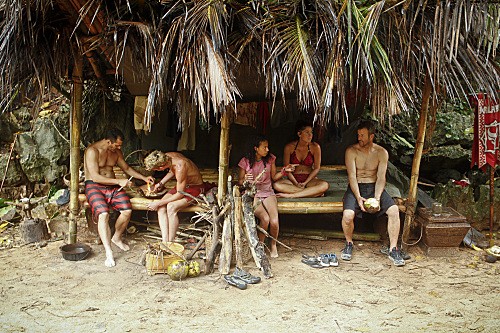 Tonight on CBS Survivor Philippines airs with a whole new episode called “Got My Swag Back.” On tonight’s A twist in the game causes a shift in tribe dynamics. If you missed last week’s episode we have a full and detailed recap for you here!

On last week’s show Russell fearing that he may be the next to go home, shared a story of how he was bullied when he was 8 years old.  Russell felt his looming threat of elimination, so he set out to find the elusive Immunity Idol.  The Matsing tribe could not break the trend and they headed back to tribal council again

At Tribal Council, everyone has there bags packed and claim they are unsure who is going home. Jeff did the rounds and asked everyone why they should stay in the game and they all have their reasons why they were the best to stay in the game.  At the vote Russell voted for Malcolm and  Malcolm for Russell, it’s was all up to Denise’s vote.  The fourth person voted out of Survivor Philippines was Russell.

On tonight’s show A twist in the game causes a shift in tribe dynamics. Meanwhile, as conditions worsen at camp, one castaway is faced with a game-changing decision.

Tonight’s episode is going to be filled with the usual drama, which you won’t want to miss. So be sure to tune in for our live coverage of CBS’s Survivor Philippines – tonight at 8PM EST!  While you wait for our recap, hit the comments and let us know what you think of Survivor Philippines Season 25, so far?  Check out the sneak peek of tonight’s recap below!

Tonight’s episode: It’s day ten and there are only two members left on Matsing but Malcolm and Denise have found the immunity idol and have an advantage when they merge with another tribe.

Jeff calls all the tribes together and tell Matsing to drop their buffs, he throws two buffs at them, Malcom to Tanang and Denise to Kalabaw.

It’s the reward challenge and it’s a sweet one with lots of sugary treats for the winning tribe. The tribes basically have to go one against one player in a pit, each tribe holding and idol and whoever can knock the others out of their hands win. Tandang wins the challenge, Malcolm is finally on a winning team.

Malcom is thrilled, he feels like he has his swag on; a new tribe, an immunity idol and lots of sweets. Pete is happy to have Malcolm on the team and he thinks he’s not as stupid as Mike. Pete goes on to tell Malcolm that he has an immunity idol and he can now get rid of Mike that Malcolm is on the tribe.,

At Kalabaw, Katie is thrilled that Denise is on her team and wants her to be a part of her female alliance.

It rained all night and Dana just can’t shake the cold, she is dizzy and has sharp pains in her stomach.  Jonathan is worried about Dana that she could just be shutting down. Dana is in bad shape, she now has a fever and can’t talk. Medical attention arrives to take care of Dana, it’s Jeff himself who shows up with a medical team.  The medical team thinks that Dana can last, she’s not in a life threatening situation and she can make it if she just drinks some liquids. In the end, Dana decides that she can’t take it anymore and leaves the game. Katie is upset, she loves Dana, but her best ally got taken away by the medics.

It’s time for the immunity challenge; they have to race through a serious of obstacles, untie ropes to drop a draw bridge that leads them to a rope that they have to chop down which releases puzzle pieces, then they have to solve a word phrase. On Tandang, they have one extra player so Abi-Maria sits out again. Jeff is surprised to see that is her sitting out again and asks her how many challenges she has even participated in, she says two.

Tandang wins immunity, virtually by a second, it was a close call and they remain undefeated in this game.

Denise joins Jeff’s alliance and he’s thrilled, as well as Jonathan. The tribe is basically going towards sending either Katie or Dawson home.

At Tribal Council, Jeff thinks that losing Dana caused them to lose the challenge. Dawson thinks Denise should be kept on the tribe because she is a strong player, she also thinks they should keep her because she is optimistic and positive. It’s time to vote, someone is going home tonight.

Time for Jeff to read the votes, Denise 1, Dawson 4, that’s enough, the tribe has spoken and Dawson is heading home. First Tribal Council and first blind side for this tribe.