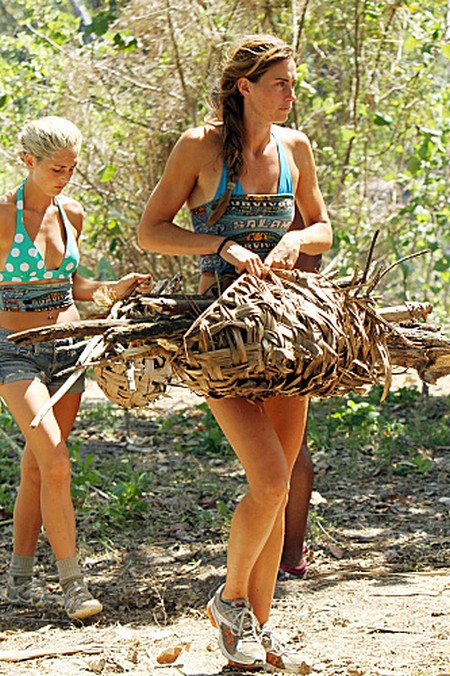 Survivor: One World airs tonight on CBS and it is called ‘Bum-Puzzled.’ Stay tuned as we live blogging the episode with all the up-to-the-minute details.  On last week’s show by some miracle the ladies team won the reward challenge and it gave them some momentum.  They ended up having a huge comeback victory and winner immunity.   The men went to tribal council and because the men start to feel Matt was a threat he was blindsided and sent home.  If you missed the episode you can read our official recap here!

On this week’s show the battle of the sexes continue and an unforgivable betrayal forces one tribe to make a drastic move that has never been done before in Survivor history, and an electrifying Tribal Council leaves several castaways speechless.   Much to my surprise Colton seems to be controlling the men’s team.

From the preview of tonight’s episode Jay Byars says that he is “completely bum-puzzled right now.” I wonder what that means?  Jeff Probst said about it, “A first at Tribal Council.  A game-changer.  One of the most unexpected things I’ve ever seen happen.”  hmm I am even more curious now, wonder what is going to happen?  Any ideas?  Sound out in the comment below and let us know!

We will be live blogging the show tonight at 8PM EST with all the exciting happens.  So don’t miss the recap, come and spend the evening with us!  Make sure to refresh often to get the most current updates1  While you wait for the recap, you can check out the sneak peek video of tonight’s episode HERE!

Tonight’s Recap: Michael was upset getting back from Tribal Council he feels they are trying to get rid of the strong guys and Michael think they are dumb.  Tarzan is happy he feels his alliance is solid – Tarzan tells his alliance Billie is the next person to go – he believe he is dangerous.

Over at the ladies team they are breaking snails and getting them ready for breakfast.  ewwww  The men come over and see the women cooking and ask them what they are cooking – they show the men there snails cooking.  Jonas ask the women if they can borrow their net – they would fish and give them 1/2.  The women say NO, they say they hate to be bitches but…  Troyzon cannot understand them – they have a free offer and they turn it down.

Reward Challenge.  They will take turn using a slingshot to knock out targets either horizontally or diagonally.   The first team to knock five out will have the choice of three prizes.  1) Comfort which includes pillows and blankets 2) Protection from the  rain (a tarp)  3) Luxury which is coffee, sugar, creamer and a whole plate of donuts.  The men sit out Bill.

The women win the third straight challenge.  The men say it is just luck.   The women chose the tarp.

The man think the women are luck and the challenge was luck.  Bill disagrees and he tells the men that the women are serious contenders.

Leif decides to tell Bill that Colton is gunning for him – Bill is surprised and is determined to find an idol.  Michael decides to cause trouble and told Colton what Leif did.  Colton confronts Leif and he admits what he did.  Colton tells Leif he has signed his death warrent.  Can you believe Colton is basically controlling the men’s team?

The ladies get tree mail. The ladies figure the challenge must be a puzzle.  Kat tells everyone she is nott he brightest light when it comes to puzzles.  Alicia takes what she said to mean that Kat does not work with her.  The women have a bit of drama going on and Sabrina puts a  stop to it.  The women head to the challenge.

IMMUNITY CHALLENGE – Once again immunity is back up for grabs.  Survivors will be paired up and tied together each pair has to go across a teater taughters to get solve a puzzle and then they get keys and have to raise a flag.

The women are having so much trouble with their puzzle that they go and look and see what the men are doing. The men are not pleased and they call them cheaters. The women keep looking at the men’s puzzle to find the answer. Tarzan keeps calling them cheaters.

The men win the immunity challenge and the men destroyed the women. Alicia thinks she let them down.  Sabrina agrees – she feels Alicia has no fight.  Kim thinks Christina should be the one to go and she is nervous because Sabrina is trying to get Alicia voted off.

Bill calls Colton a stuck up brat – Colton tells everyone Bill is a crazy person.  Colton gets a crazy idea he wants to go to the women and tell them the men will go to the immunity challenge for them.  Jonas does not like the idea but Colton is making the choices.  Tarzan says when a group of men get together and make a pact don’t betray them.

Sabrina does not care she is happy the women are falling apart.  Kat thinks they are nuts.

Colton is so arrogant he thinks he is running the show.  The women are starting to realize they may not go to tribal council.

TRIBAL COUNCIL:  I cannot believe this the men went to tribal council.  Jeff tells them 24 years and they have never seen this happen.  Jeff tells them this is the one place they don’t want to be.  Leif is upset he knows that he put his foot in his mouth.  Jeff does not get why it is so urgent to come to tribal council.  Jay tells Jeff he said yes because if he did not he would have a target on his back.  Jeff cann0t believe it – Bill says this could be the single dumbest move he has ever seen.  Colton is really not nice he tells Jeff Colton is a stand-up comedienne and he needs to get a real job.  Colton tells Jeff he likes African Americans he has knows lots of African Americans and Jeff asks who and he says his House Keeper.

Colton tells Jeff Bill has to have a backup plan.  Bill tells Colton that he has never had a job in his life how can he speak to hi that way.

Bill is voted out.

I really cannot believe this – Colton is clearly running the game and he is not the nicest person I have ever seen.  Jeff tells them it was a risky move and time will tell if it pays off.

What did you think?  Was this the dumbest move?