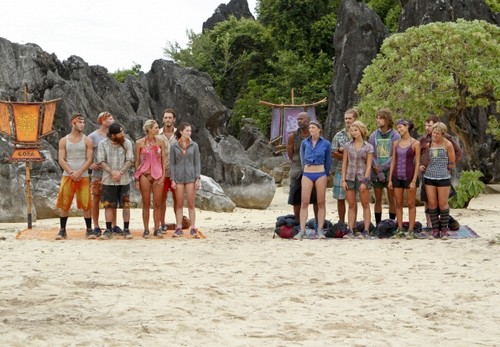 Tonight on CBS SURVIVOR CARAMOAN – Fans vs Favorites returns with a new episode called, “Operation Thunder Dome.” On tonight’s show the game is thrown off-balance when one Tribe’s change results in a strength disparity between Gota and Bikal.  Did you see the premiere episode last week?   We did and we recapped it here for you!

On last week’s show the Favorites had to contend with an out-of-control Brandon when he stunned his tribe & revealed his hidden desire to sabotage their camp, leading up to a meltdown. In a history-making moment Brandon got upset with Philip and because of his out-of-control actions Jeff Probst was forced to take Brandon aside and hold a tribal council immediately.

Everyone voted immediately, some of the women were crying and Brandon was out. Jeff warned Brandon to walk away and cool down, he did not want him going back to camp. As Brandon was leaving, he called Phillp a *itch and everyone breathed a sigh of relief that he was leaving. Clearly this was not an easy decision for the tribe, but you know what they say, “the apple doesn’t fall far from the Hantz tree”, like nephew, like uncle.

On tonight’s show a shake-up with the Tribes creates chaos and new alliances. Meanwhile, the game is thrown off-balance when one Tribe’s change results in a strength disparity between Gota and Bikal.

The tribe doesn’t understand how thy can respect Brandon for screwing the other members of the tribe especially when they never did anything to him; that he’s up there with Mel Gibson and all the other crazy people. Corrine is upset that nobody tried to save her or Phillip but it feels good that he’s gone. Cochran says that it’s good Brandon was able to fly over the cuckoo’s nest and they’re now left with Phillip. Phillip says they have to go after Corrine next though since she’s ego driven.

Reynold says he just wants to survive long enough so that something shifts in the game. Matt says they’ve been bummed out losing so many challenges but he recognizes that the other camp doesn’t have it all together; he actually feels bad for Phillip and their team. Phillip says they finally had a good night’s sleep now that Brandon is gone.

However, the new found unity is now lost as the tribes are going to be changed thanks to Jeff. Phillip and Matt are now on the same side. Corrine is now on the losing team; she feels overwhelmed. Jeff says the game just started anew.

Eddie says he’s ecstatic. He thinks the Gota tribe is the best that it can be. He thinks his chances of going further has increased. Eddie and Reynold want to get rid of Cherri. Erik thinks Eddie reminds him of a used car salesman. Cherri says Eddie is great when he’s not with Reynolds.

Andrea is happy that Cherri spilled the beans about the tribe. Phillip tells Julia that they can advance and be ready to make a move when it comes but he’s not going to ask twice. Malcolm thinks he’s aligned with a dysfunctional group of people. Corine says that Phillip is the worst agent she’s ever met; that it has crossed her mind to vote him off.

Jeff says that that immunity is back up again and the challenge will involve crates and building a staircase; the losers will go to tribal council. Erik and Reynold get off to a quick start while Julia and Phillip get off to a fumbled start. The Gota takes the lead. Gota gets all their crates first and start working on the staircase while Phillip and Julia argue over what to do; Jeff says they’re moving so slow that they must be on medication. Gota finishes and wins immunity. Phillip thinks Corrine is inept except for taking care of herself. Phillip thinks he needs to wait for the proper moment for his chance.

Phillip tells the other members of The Call that they did their best,  but sometimes the better team wins. Corine says that Phillip is the absolute worst person out there. Corine says he is more annoying than a crying baby on an airplane. Philip tries to convince Matt and Michael of a secret group, but Matt secretly wants to laugh. He is just kissing ass to get further ahead. Cochran likes the idea of voting off Julia but it doesn’t make sense to keep Michael and Matt together as a duo.

Corinine is undecided but would really love to get rid of Julia since she is boring and thinks Julia cost them the immunity challenge. Jeff questions the individual team members about what their mindset is about possibly voting off members. Two votes for Julia, one for Dawn, four for Matt. Matt is voted off. The tribe has spoken. Jeff tells Julia and Dawn that they’re in trouble and they have to win immunity to stay in the game.