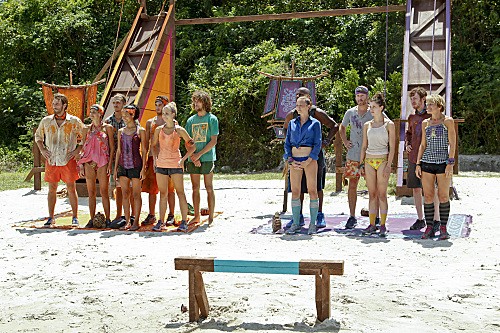 Tonight on CBS SURVIVOR CARAMOAN – Fans vs Favorites returns with a new episode called, “Tubby Lunchbox.” On tonight’s show Over at Gota Tribe, Reynold shares confidential information about his hidden Immunity Idol that could change his game.  Did you see the premiere episode last week?   We did and we recapped it here for you!

On last week’s show a shake-up with the Tribes created chaos and new alliances. Meanwhile, the game was thrown off-balance when one Tribe’s change resulted in a strength disparity between Gota and Bikal.  At tribal council there were two votes for Julia, one for Dawn, four for Matt. Matt was voted off.  Jeff told Julia and Dawn that they’re in trouble and they have to win immunity to stay in the game.

On tonight’s show as the newly formed Bikal Tribe continues to struggle physically in challenges, they grow increasingly tired of Phillip’s attitude. Meanwhile, over at the Gota Tribe, Reynold shares confidential information about his hidden Immunity Idol that could change his game.

Michael feels that tribal council has sucked since day one but he feels like he’s on his own but he will try to make alliances. Corrine says Michael is not going home on her watch. The two exchange their plans.

Phillip wants Corrine gone and doesn’t want her going to the merge, especially since she’s consistently going to other people.

“The strong will carry the weak” is the mantra for this week’s challenge. Phillip thinks he is more than ready to accept those words; that he beats most men even those with great big muscles. Phillip challenge Nathan to an arm wrestling match and beats him.Cochran thinks it was to build his ego. Phillip now feels more confident and says his asset is his will.

For today’s challenge, the tribe will be wearing a belt and carrying a sandbag. The winning team will be taken to a nearby island for some R&R. Phillip, the oldest, is in the front for the Call while the Gota puts their fittest. Phillip starts to complain that he can’t run and that he’s tired while Gota starts to catch up. All the Call tribe has done is walk. Gota wins as Phillip falls down! Dawn says that Phillip is very arrogant; he only sees his strengths but none of his weaknesses.

On the other island, The Call enjoys their reward which includes coffee and some pastries. Reynolds says this reward is hitting his sweet spot and that it helps solidify the bonds taking place in the tribe. Malcolm says he’s keeping a smile on his face but at the same time, he’s getting ready to make a move.
Phillip says Gota had youth on their side. Corrine says that this is all Phillip’s fault and everyone else sees his true colors. Cochran says Phillip has grown very close to Julia and he’s not sure why since she is close to vanilla. Phillip tells Julia that he’d like to make her one of the best. Phillip will do everything in his power to make her stay in the game. Julia does not find Phillip to be too intimidating but she feels he is destructing the unity of the tribe.

Reynold and Malcolm form an alliance, especially after Reynold tells Malcolm he has an idol. Dawn wants to know what Julia is thinking. Julia tells her that she’s feeling a little bit bullied by Phillip; she’s okay working with him if it keeps her in the game but suggests overthrowing Phillip. Dawn turns around and tells Phillip exactly what Julia said! Phillip is disappointed in Julia.

Jeff sets up another challenge for immunity which involves rowing a boat and retrieving a statue from the water and then pacing it back on the boat. Gota is off to a fast start and early lead but The Call then takes the lead. Gota gets their statue in the boat first. Reynold secures the first key for Gota as Phillip fails to do so. Reynold has another great toss. Reynold gets a fourth key for Gota while Phillip gets a second. Reynold gets the fifth key. Gota then pulls the rope to get their statue up and they do! Gota wins immunity.

After 19 days, a member from The Call will become the 8th person to leave the game.

Cochran says that spirits are low, but that a sulking Phillip pulled him to the side. Phillip tells Cochran that he didn’t want to win the challenge; he threw it just so that they can get rid of one of the fans, namely Julia. Cochran says that Phillip has convinced himself that he’s telling the truth. Corine doesn’t like the idea of splitting votes and just wants to send Julia home. Phillip sees Corine putting her interests above everything else because she’s in love with Michael. Phillip is upset that Corine wants to interrupt him. Corine thinks he is beyond awful and in the real world, she would kick his ass. Cochran says that Phillip wants to vote off Michael but it’s most likely masking something else.

Michael has lost the immunity challenge. Jeff says that Phillip put himself in the hero place but he lost the challenge for the tribe. Phillip says that winners put up another 100% for the next day. There are three votes for Michael and three for Julia. It results in a tie. Julia and Michael can’t vote; the rest can only vote for Julia or Michael. Julia is voted off the island.