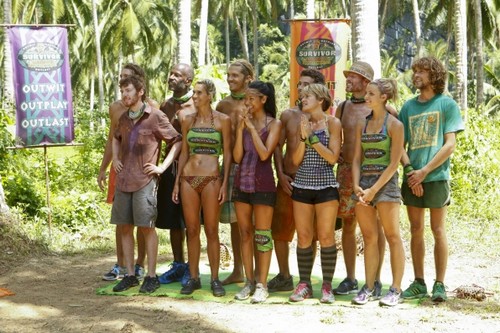 Tonight on CBS SURVIVOR CARAMOAN – Fans vs Favorites returns with a new episode called, “Cut Off the Head of the Snake.” On tonight’s show chaos ensues when confused castaways are undecided on whether to vote out an easy target or blindside a big threat. Did you see the premiere episode last week? We did and we recapped it here for you!

On last week’s show the merge happened!  The teams got to celebrate the merge with a feast and alcohol.  Of course as usual the merge sent everyone scurrying trying to get into alliances.  Talk soon started among some about potentially blindsiding a person at the upcoming tribal council.   At tribal council here was your vote –  7 votes Corrine 5 votes Sherri, there was your blindside, Corrine never saw this one coming, she was voted out.

On tonight’s show one castaway learns a secret that will potentially change the game, and chaos ensues when confused castaways are undecided on whether to vote out an easy target or blindside a big threat.  It also looks like we are going to be treated to a showmance tonight between Andrea and Eddie.  Another big question is now that Corrine was voted out last night Malcolm is probably feeling vulnerable.  He has the immunity idol, but anything can happen.

RECAP: Reynold realizes that every women that aligns herself with him, goes home. Malcolm lost his only ally but he’s the only one that knows that he has the idol, so he thinks he is safe. Phillip tells Shari that the first time he saw her, he thought she was hot then he names her Tenacity.

Time for the reward challenge. Shari is not picked for the two teams, so she won’t be going on the reward. Teams basically have to jump in the water and throw a ball through a net on the other side. There is an orange team and a purple team. It doesn’t take long for the score to be tied. Eric wins it for the purple team; Eric, Eddie, Reynold and Michael win reward. The winning team will be brought to a beautiful waterfall and waiting at the bottom will be a picnik lunch.

The guys are enjoying their feast and doesn’t take long for the group to start talking game. Cochran is not impressed, they group doesn’t appeal in him at all.

Back at camp, Malcolm doesn’t care that he didn’t win reward, he is with the people he needs to be with to secure his place in the game and heads right over to Shari and starts talking game. Malcolm approaches Dawn, but she doesn’t trust him and she is thinking it is best to take the opportunity and blindside him. Phillip knows about Dawn’s plan and he is in.

Time for the Immunity Challenge and it’s going to test the tribe members ability to stay calm as they will be put under a grate in the water and as the tide rises, so where their ability to get air. After 30 minutes the water has risen three inches and everyone is starting to feel it. It’s an hour now, slowly they are running out of space and this is where they need to stay calm. Phillip is the first person out of the challenge.  Shari is out, so is Eric. Dawn is the fourth person out, everyone else is having to make some sort of snorkel with their hands to breath. Malcolm is out, Micheal as well. There are only five left and they are getting dizzy. They are down to two people, Brenda and Andrea, who will win it. Andrea is out, Brenda wins immunity.

At camp, everyone is lying to everyone, it’s anyone’s guess what is going to happen at Tribal Council. The funny thing is, Phillip thinks he is running the show, but it really is Andrea. Malcolm shows his idol to Dawn, he’s trusting her which makes him really stupid. Reynold shows the idol to Dawn and he thinks this seals the deal with her being on their side, but it doesn’t. Reynold and Malcolm want Andrea gone, but I don’t know if that is going to happen. Andrea finds out that she is targeted and gets all of her alliance to get rid of Michael instead. Dawn is frustrated, all the work she has done to get Malcolm out is for nothing. Dawn is upset that Eddie told Dawn that she was a target.

At Tribal Council Jeff asks Phillip what is going on at camp and he tells him about “Stealth Are Us” and his newest member Tenacity. Andrea says in her season she was in the bottom of her alliance and this is an opportunity for her to be on top. Phillip thinks there is enough numbers left that if someone makes a surprise move, they will get flushed out.

Time to vote. Voting all done, Malcolm turns to Reynold and asks him to pass over the idol because he thinks he is going to be voted out.  There are three votes for Andrea, one for Reynold and wants it gets to six votes to Michael, he is voted out. Michael turns around to Reynold and Malcolm as he is leaving and calls them turkeys.