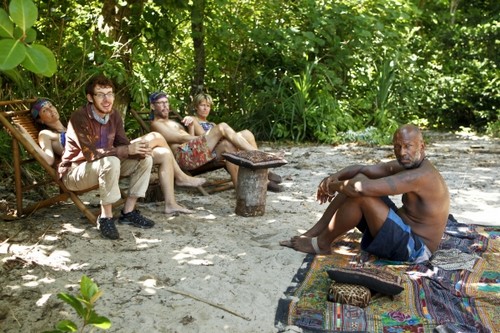 Tonight on CBS SURVIVOR CARAMOAN – Fans vs Favorites returns with a new episode called, “Blindside Time.” On tonight’s show All bets are off when Bikal and Gota merge, as castaways reunite to plot a potential blindside in the new tribe. Did you see the premiere episode last week? We did and we recapped it here for you!

On last week’s show as the newly formed Bikal Tribe continued to struggle physically in challenges, they grew increasingly tired of Phillip’s attitude. Meanwhile, over at the Gota Tribe, Reynold shared confidential information about his hidden Immunity Idol that changed his game.  At tribal council there were three votes for Michael and three for Julia. It resulted in a tie. Julia and Michael could not vote; the rest could only vote for Julia or Michael. Julia was voted off the island.

On tonight’s show the merge is happening!  The teams get to celebrate the merge with a feast and alcohol.  Of course as usual the merge sends everyone scurrying trying to get into alliances.  Talk soon starts among some about potentially blindsiding a person at the upcoming tribal council.  Lets hope it is Philip.

RECAP: Phillip begins this episode on the usual wrong foot, he claims he threw the last challenge when everyone knows that he just did poorly. Dawn is worried that the game might fall apart for her again, like it did last time with Cochran. There is so much on the line for Dawn, her family could really use the money and she doesn’t want the same thing to happen again.

There is a boat coming ashore, there is a note, the teams are basically merging. Corinne is happy about the move, she is sick of talking to the same people. Reynold thought it was ironic, everyone is at each other’s throats yet they gave each other a warm welcome. Malcolm comes up with the new name for the tribe, Enil Adam and tells everyone that it means a new beginning, yet it is really his mother’s name spelled backwards. Andrea doesn’t think the next vote is a big deal, she is feeling secure.

Everyone has their game on and are talking strategy and alliances. Tree Mail has arrived and the next challenge is going to be an eating one, gross. Cochran is looking forward it, he thinks this is what his love life needs, a little danger. Time for the Immunity Challenge, a food eating competition where tribe mates will have to race local delicacies.

The first item is beetle larva, this is the first time since season six. Andrea is good, Malcolm is in, one spot left and it belongs to Eddie. Time for another six players to take their try at beetle larva, Cochran is done, Pjillip is in as well with Michael joining them.

Next, it is worms and they look really slimy. The first person to finish is Eddie, then Cochran and Eddie. The next thing they have to eat is duck embryos. To move on to the final round, two people will have to eat the embryo, Cochran is first with Malcolm second.

The last round is between Cochran and Malcolm, they take their spots for the final meal; pig brain. The first person to show Jeff a completely empty mouth wins individual immunity, it is Cochran. Wow, I didn’t know Cochran had this in him, did you?

Corinne wants to put Sherri up, but Phillip is not in for that which is making her furious. Cochran would prefer to target Eddie or Malcolm. Eddie is optimistic that Sherri will go home.

Corrine his trying to get Dawn on her side, Dawn runs right to Cochran and tells him about it, Corrine wants to backdoor Phillip and flip the vote. Erik never talks game and has realized that in doing so, he has become the swing vote in this next vote.

At Tribal Council, Michael tells Jeff that there are two distinct sides to the team even though they have merged, it is still fans against favorites.

Reynold says if you are a favorite, you need to start making a move and he doesn’t count out the fans yet. Sherri tells Jeff that she doesn’t think the fans have a shot at this game. Reynold disagrees, there is a lot of bubbling and the bubble is going to burst soon.

Time to vote, Phillip is first and we see him vote for Corinne. Corinne votes for Sherri, no surprise there. It will be interesting to see where this vote goes.

Here is the count, 7 votes Corrine 5 votes Sherri, there is your blindside, Corrine never saw this one coming, she is voted out. Well judging from the look on Corinne’s face, that was not a straight forward vote.