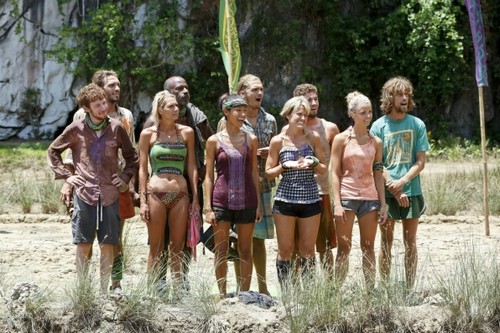 Tonight on CBS SURVIVOR CARAMOAN – Fans vs Favorites returns with a new episode called, “Zipping Over the Cuckoo’s Nest.” On tonight’s show in one of the most shocking Tribal Councils, a huge revelation forces an alliance to scramble and potentially turn on each other. Did you see the premiere episode last week? We did and we recapped it here for you!

On last week’s show one castaway learned a secret that could potentially change the game, and chaos ensued when confused castaways are undecided on whether to vote out an easy target or blindside a big threat.  We were treated to a showmance last week between Andrea and Eddie. Malcolm was feeling vulnerable, he had the immunity idol, but was still worried.  At tribal council Malcolm turned to Reynold and asked him to pass over the idol because he thought he was going to be voted out.  There were three votes for Andrea, one for Reynold and once it got to six votes for Michael, he was voted out. Michael turned around to Reynold and Malcolm as he was leaving and calls them turkeys.

On tonight’s show an accident threatens one castaway’s future in the game, their nerves are so frayed they contemplate leaving.  In one of the most shocking Tribal Councils, a huge revelation forces an alliance to scramble and potentially turn on each other,

RECAP: Phillip is back to game talk and Dawn is having what seems like a nervous breakdown. It turns out that Dawn lost her retainer and will pull herself from the game unless she finds it, are you kidding me? Brenda saves the day, she dives into the water and finds the retainer. Dawn gets the award for dumbest moment on Survivor.

Time for reward challenge, the tribe is going to be split into two teams of five, they have to go through an obstacle course, through a muddy pit to retrieve some balls, then they have to crawl through some rice, what a mess. The purple team is ahead, the players are Phillip, Dawn, Reynold, Erik and Cochran and they have to throw the balls into a tall funnel, they do it and are heading out for their reward and it’s going to be a feast.

The tribe mates arrive for their reward and it is a ridiculous amount of food, much more than they can possibly eat. There is a pool and everyone is supposed to shower first, but Phillip; mud and rice, jumps into the pool – what an idiot. Dawn is nervous and thinks she may just get bindsided. Andrea has been spending a lot of time with Malcolm and Eddie, which really makes Dawn worry. Meanwhile, Cochran is suspicious of Dawn because she is so nervous.

Phillip tells Andrea that Dawn is out of control, while Dawn goes to speak to Cochran and tells him that she is unstable and thinks that she needs time alone.

Dawn gets a good night’s rest and feels so much better about the game and about the alliance. “Stealth R Us” want to get Reynold out, Andrea emphasizes how nothing can go wrong tonight at Tribal Council. Cochran doesn’t want to get too confident, but he believes his alliance has the numbers.

Time for the Immunity Challenge, this one is physical. Tribe mates have to dive into the water to retrieve two rings. Phillip decides to sit out of this challenge, he explains that he has a huge fear of being under water. Reynold, Andrea, Brenda, Malcolm and Eddie make it and are in the final round, they now have to retrieve five rings, this is really mentally and physically challenging. The women are starting to fall behind quickly, it appears neck and neck between Reynold and Malcolm. The winner of Immunity is Reynold, he’s not going home tonight, “Stealth R Us” will have to choose someone else.

Reynold knows people wanted him out and he was the biggest threat, but he has the power now and he wants Phillip out.  Meanwhile, Phillip wants to change the vote to Malcolm. Malcolm is convinced that there is a new idol out there, he is on the hunt. At camp, Phillip shares with everyone about his under water experience that scared him as a boy.

Other tribe mates get into the search for the idol but Malcolm looks between a rock wall and he finds it. The vote is switching again, now it is on to Eddie.

At Tribal Council, Eddie tells Jeff that it is either him, Malcolm or Reynold – so since Reynold and Malcolm are safe, he knows the target is on him. Jeff asks Cochran who was the original target and he says Reynold. Jeff confronts Phillip about his refusing to participate in the challenge today, Phillip explains his fear. Andrea tells Jeff that there is a lot of tension in the tribe, the three young guys are on the outs because they are on the outs. Malcolm throws a huge curve ball into the game, he has another immunity idol and he is giving to Eddie, what a shift, the person who is going home tonight is not Malcolm, Eddie or Reynold. Jeff can’t believe it, Dawn had control of the game twenty seconds ago. Malcolm tells Jeff, they are not going home and then he says out loud that they are voting for Phillip because the game is not fun any more. Phillip says that Malcolm is trying to sabotage him. Andrea says that even though they are voting for Phillip, she is still scared. Jeff wants to know what Cochran feels, he says that he is having a bipolar reaction, he can’t believe it. Jeff says this is all up to who the three amigos are going to vote for, who the other seven are going to vote for and will the two amigos use their immunity idols.

Time to tally the votes, Jeff asks if anyone wants to play their immunity idols they should do so. Both Eddie and Malcolm both play their idols. First vote is Malcolm, then some for Eddie. Now one for Phillip, two for Phillip, three for Phillip and he is leaving the game. What an awesome Tribal Council, the best I have seen in years. Finally, the Three Amigos do something that fans have been wanting to happen for the so long, a complete and total game shake up. Bravo! Bye bye Phillip, we won’t miss you or your military.