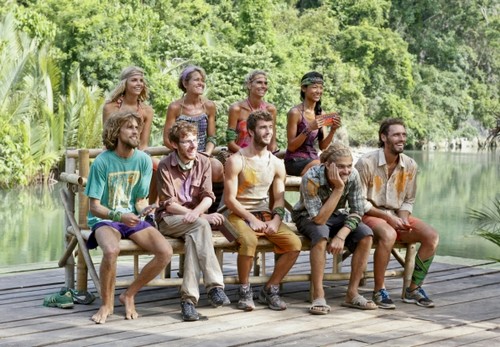 Tonight on CBS SURVIVOR CARAMOAN – Fans vs Favorites returns with a new episode called, “Come Over to the Dark Side.” On tonight’s show the popular food auction returns and the Three Amigos concoct a lie in attempt to take control of the game.   Did you see the premiere episode last week? We did and we recapped it here for you!

On last week’s show an accident threatened one castaway’s future in the game, their nerves were so frayed they contemplated leaving.  In one of the most shocking Tribal Councils, a huge revelation forced an alliance to scramble and potentially turn on each other.  Malcolm threw a huge curve ball into the game, he used his immunity idol and then revealed he had another immunity idol which he gave it to Eddie.  Reynold won immunity.  So the three young men had immunity.  It was a huge shift in the game since the alliance planned to get rid of Malcolm, Eddie or Reynold.  The three immediately revealed they were voting for Philip.

The first vote was Malcolm, then some for Eddie. Then one for Phillip, two for Phillip, three for Phillip and he was voted out of the game. What an awesome Tribal Council, the best I have seen in years. Finally, the Three Amigos do something that fans have been wanting to happen for the so long, a complete and total game shake up. Bravo! Bye bye Phillip, we won’t miss you!

On tonight’s show it is going to be hard to top last week’s show and the crazy tribal council.  We know tonight that Malcolm, Eddie or Reynold are going to continue to try to shake the game up.  Also the the popular food auction returns tonight and the Three Amigos concoct a lie in attempt to take control of the game.

RECAP: Last week Steath R Us lost their leader, it will be interesting to see where the game shifts this week. After Tribal Council, Malcolm thinks that by knocking off the leader, the stability has been knocked off in the game.

The next morning, Cochran is still breathless about Tribal Council the day before. A lot of the tribe mates are hungry, causing the morale to be very low. Brenda is reduced to tears, she feels like she lost control of the game.

Tree mail, everyone gets an envelope filled with $500 cash, it is a Survivor auction. Malcolm gets some beer and nuts, Reynold wins an uncovered item, but he gets to trade for another uncovered item if he wants. In the end, Reynold wins one slice of pizza. Sherri wins the rest of the pizza. Dawn gets a roasted chicken. Next it is information in the game, Malcom wins it and has sixty seconds to read it, a map to an immunity idol. Andrea wins a spaghetti dinner, but Jeff tells her he will trade a large bag of rice and beans for the whole group instead, she takes the stuff for the group. Cochran wins an advantage in the next Immunity Challenge. Brenda won pig brain. Next there are letters from home for everyone. Eddie won a giant jar of peanut butter, he has sixty seconds to share it with everybody.

Everyone is feeling good after the auction, it is a 180 degrees turn. Brenda is feeling on top of the world with her letter from home. Sherri figures that if she can’t beat Malcolm who is on his way to getting another immunity idol, she is going to join him. It’s night time and Malcolm is out looking for his idol. Andrea catches Malcolm and just starts to hang around him. Andrea knows that Malcolm is looking for the idol and she absolutely plans to look for it. Malcolm asks her right out to leave and she doesn’t. Malcolm stops looking and sits beside Andrea to wait it out.

Time to get to the Immunity Challenge, contestants are going to hold on to a rope that is connected to poles that way one third of their body weight that they started the game with. The last person holding the rope will win the immunity idol.  Brenda is the first one out, then Erik, Sherri, Malcolm, Andrea, Dawn and Reynold. It is down to Cochran and Eddie, Cochran has a two knott advantage that he won at the auction, Eddie is out, Cochran has won immunity.

At Tribal Council Phillip looks furious. Jeff realizes that it can be anyone going home tonight as with the leader voted out in the last tribal council, his alliance seems to be braking. Sherri is straight with Jeff and tells him it’s anyone’s guess on where their old alliance is heading in tonight’s vote.