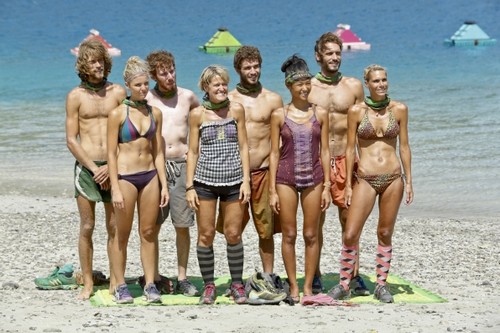 Tonight on CBS SURVIVOR CARAMOAN – Fans vs Favorites returns with a new episode called, “The Beginning of the End.” On tonight’s Two immunity challenges and two Tribal Councils raise the stakes, forcing castaways to consider big moves on their biggest threats. Did you see the premiere episode last week? We did and we recapped it here for you!

On last week’s show it was going to be hard to top the show 2 week’s ago and the crazy tribal council.  We knew that Malcolm, Eddie or Reynold were going to continue to try to shake the game up.  Also we had the popular food auction return and the Three Amigos concocted a lie in attempt to take control of the game.  At Tribal Council Phillip looked furious. Jeff realized that it could be anyone going home, his alliance seems to be breaking. Sherri was straight with Jeff and told him it was anyone’s guess on where their old alliance was heading.   At the vote, three votes for Andrea, three votes for Reynold and three votes for Malcolm; it’s was three way tie. Time to vote again and this time Malcolm went home and he got burned pretty bad as Erik and Cohran were two of the votes against him.

RECAP: Tree mail shocked everyone the morning after Tribal Council, another immunity challenge already. It’s a windy day and immunity is back up for grabs. Tribe mates have to balance on a triangle in the water with bare feet on an uneven platform. Jeff offers that if anyone is willing to drop out off the challenge, he will give them milk and a plate of donuts. Eddie and Erik jump off and take the treat.

Jeff now offers three hot dogs and a coke, Cochran jumps off and takes the food. The challenge has gotten tougher, everyone is now on top of the triangle and shaking all over. Dawn falls out of the challenge, we are now down to four. Sherri is the next one to fall, Andrea, Brenda and Reynold are the last three and the wind is definitely causing them problems. Reynold falls in, he is out. One person is walking away with immunity, either Andrea and Brenda. The girls try to strike up a deal, but neither will give in. After 3 hours, both girls are still standing. Historically the girls make up their own rules to end the challenge and Jeff lets them, both girls have to raise their left legs. It doesn’t tale long for Brenda to fall, Andrea wins immunity.

Time for Tribal Council, Jeff wants to know Eddie’s rational for choosing the food in the Immunity Challenge, Eddie says that he knew he couldn’t win anyway, so why not free donuts. Jeff then asks Brenda and Andrea why they hung on so long when they are in alliance, Brenda says it is because they wanted to challenge themselves. Jeff asks Dawn if it could be her tonight and she says absolutely, if she can lie to people in this game then they can lie to her too. Time to tally the votes, four votes for Reynold, he is voted out. What a stupid move, they had the chance to blind side Brenda and they didn’t, dumb.

Andrea is thrilled that Reynold is gone and is now already working on who she can blindside, she has Brenda and Dawn on her mind and approaches Cochran as soon as they get back to camp. Cochran doesn’t agree with Andrea and he doesn’t like that she wants to take out one of his biggest allies in the game, Dawn. Cochran runs to Brenda and Dawn and tells them everything, the tables have turned, Cochran is convincing everyone that they bold move they should make is getting rid of Andrea.

Ridiculous, time for yet another Immunity Challenge. Today team mates are back in the water and they have to push a buoy through a rope obstacle. Once that is done, they have to unravel some knots to get to a key. Once they get the key they need to open a chest, Erick is in the lead with Andrea right behind him. In the chest there are puzzle pieces that make up a ladder, but all pieces are unique and only fit into one place. Erik is flying through the challenge, Brenda is now behind him as Andrea is struggling at the ladder. Erik wins immunity and guaranteed a spot in the final six.

Andrea is still campaigning strong to get Brenda thrown out and she is convinced that everyone is on her side, but if she is paranoid, she will play her immunity idol. Eddie has been trick and fooled before every tribal council, but tonight he believes Andrea that everyone is going to vote out Brenda. Cochran really wants to get rid of Andrea, he sees that Eddie is moving up on her meter and she probably plans on taking him to final three with her. Brenda knows she is in danger but she is going jump a leap of faith and trust everyone, she will be writing down Andrea’s name. Cochran thinks it is best to split the vote. Erick is a split vote, Andrea told him she wants to take him to the final two, but he is going to do what is best for him.

At Tribal Council, Jeff tells Eddie that he is the last one who is not a part of the alliance, Eddie says yes but it is the perfect time to pull a big blind side. Sherri and Cochran both tell Jeff that they think everyone is lying at this point. Andrea mentions that she has the idol, Jeff thinks that it is a really big deal on day 33. Andrea says out right that if she is paranoid about going home, she is going to play it. Time to vote, no surprise to see that Brenda put down Andrea’s name. Jeff asks if anyone wants to play the immunity idol, Andrea doesn’t budge. First vote Brenda, then Andrea, then two Eddie, then two Andrea, then another Brenda. Andrea lets out a big “WHAT”, then Jeff calls out the final vote, it is another for Andrea. With three votes, Andrea is voted out and everyone is smiling. Jeff says it was a big move, but now what.