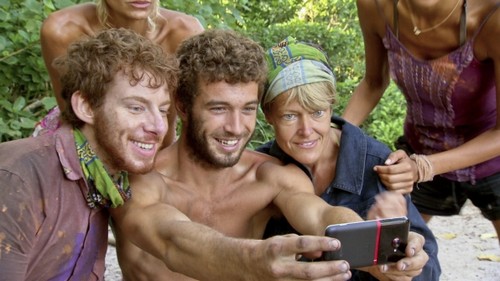 Tonight on CBS SURVIVOR CARAMOAN – Fans vs Favorites returns with a new episode called, “Don’t Say Anything About My Mom.” On tonight’s the castaways get a much-needed morale boost with a visit from their loved ones, and one Survivor is faced with a game-changing decision. Did you see the premiere episode last week? We did and we recapped it here for you!

On last week’s show we had two tribal councils and two immunity challenges last week.  At the first tribal council there were four votes for Reynold and he was voted off.  At the second tribal council Andrea opted not to play her immunity idol. The first vote was for Brenda, then Andrea, then two Eddie, then two Andrea, then another Brenda. Andrea let out a big “WHAT”, then Jeff called out the final vote, it was another for Andrea. With three votes, Andrea was voted out and everyone was smiling. Jeff says it was a big move, but now what?

On tonight’s show there are only 6 castaways left and the winner of this season will be announced on Sunday.  The castaways will get a boost tonight when their family comes to visit.  One of the castaways will have to make a big decision tonight.

There are only six contestants left. Eddie believes he’s now the sitting duck for the next council especially now that Andrea is gone.

Cochran is wondering if his time will also be up. There are so many shifts of alliances that everyone is worried about their position.

One of the people who is considering their stay on the island to being a part of a beautiful prison is Erik. He’s really hungry and has decided to climb a really tall tree in order to get coconuts. But is he’s risking his life out of hunger or boredom? He doesn’t get the coconuts and safely comes down.

The islanders are given video letters by the show. They all begin to break down once they see family members. Apparently this is one of the women’s twenty-first anniversaries. Before the video, Erick thought he was at the end of his rope but after seeing and hearing his brother he’s feeling invigorating.

There in for another surprise. All the contestants get to see their loved ones in person. Today’s challenge they’ll be working with their love ones. The prize, a full cooked barbecue waiting with their name on it.

Brenda and her dad won. However she gets to choose another survivor to come with their loved one. The surprises aren’t done yet, there is another group of loved ones waiting at the barbecue. If Brenda gives up her and Dawn’s spot, the other four contestants can go to the barbecue and see their second loved ones.

Brenda gives in for the other four contestants. The other four get to go and enjoy themselves. They’re conveniently located not the far from the island where both Brenda and Dawn can see them. Dawn isn’t taking Brenda’s decision too well. Meanwhile Cochran is already plotting against Brenda.

It’s time for their immunity challenge. The test is painful. The first one to let go is Cochran. Then Eddie, Eric, and Sherri until its between Dawn and Brenda. Dawn wins immunity. Brenda admits in her aside that she let go on purpose because it was Dawn. As long as they can send Eddie home she’s fine.

Cochran sees how everyone wants to vote off Eddie so he does his best to change everyone’s mind in order to get Brenda kicked off.

Everyone is at tribunal. Eddie believes he’s the one going and everyone supports that belief. Except when it comes down to voting and Brenda is the one voted off. Yet she somehow guessed she’d be betrayed. She quickly leaves the tribunal in tears.

In next week’s promo, the game is in for another surprise but who will go home? How will they survive when the others all return? Its one thing to plot against everyone, it’s quite another to have to face people after they’ve seen the footage.