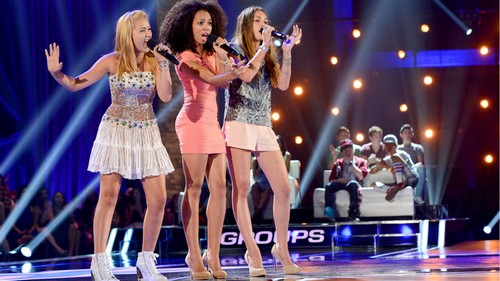 Sweet Suspense took the stage tonight on THE X FACTOR USA for the first of the live performance shows. Lillie sang “You Keep Me Hangin’ On” by The Supremes. Sweet Suspense is on Simon Cowell’s Over group team and they decided to sing this song for their Motown choice. On tonight’s show the top 12 performed live in front of coaches Simon Cowell, Kelly Rowland, Demi Lovato and Paulina Rubio for America’s vote and to make it another week. Did you watch tonight’s performance show? We did and we recapped it here for you.

Judges comments: Paulina says they have it all; the music, wardrobe and the vocals. Demi is so impressed  and feels like they are absolute stars, she thinks they killed it. Kelly says that she honestly doesn’t feel like a girl group hasn’t been in the market for a long time and thinks they are sensational. Simon says they progress so much in the two weeks and that there is something special about them.