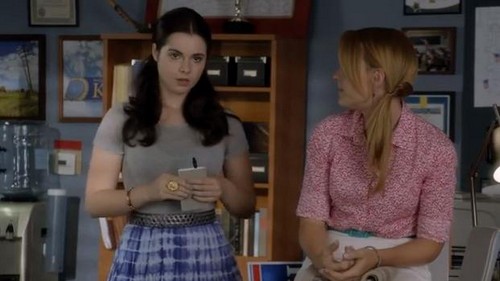 SWITCHED AT BIRTH returns to the ABC Family tonight with a new episode called, “As the Shadows Deepen.” On tonight’s show Daphne runs into Chef Jeff and John brings some business to Regina. Did you watch last week’s episode? If you missed it we have a full and detailed recap here for you enjoyment.

On last week’s episode Nikki discovered that Toby and Simone had been in touch, and Emmett and Travis tried to set Melody up on a blind date.  When Daphne and Jace (guest star Matt Kane) uncovered a potential scandal regarding Senator Coto, they had to decide what to do with the confidential information.  Angelo invited Bay to join him at a pivotal meeting concerning the custody of his infant daughter.

On tonight’s show Bay plans a Deaf Day at Maui, Kansas, and Daphne runs into Chef Jeff.  When business at Maui, Kansas starts to slow, Bay coordinates a Deaf Day and works with Emmett to organize a special screening of “Deafenstein.”  Daphne is shocked at what she discovers when she runs into Chef Jeff (guest star Justin Bruening, “Grey’s Anatomy”), and John brings some business to Regina.  Meanwhile, Toby tries to help Nikki (guest star Cassi Thomson, “Big Love”) cope with a family tragedy from her past.

There’s good news all around. Jon and Kathryn found out Toby is starting to serious look at college again. They don’t want to get their hopes just yet but Kathryn feels it wouldn’t hurt to have Jon’s dad’s endorsement. Again just in case Toby really does want to go to College.

Toby on the other hand had to drop his dream in order to support fiancée Nicki. Her dad’s killer is waning on her mind. The guy is already in prison. Toby wants her to confront the guy but she’s unsure.

While those two received upsetting news so did Bae. However she chose to fix her situation. Her amusement park job is on the brink of financial ruin. In order to save money they had to close the park down for a couple of days. Bae of course decides to find ways to keep her park open and after getting Daphne’s approval she goes through with her idea of deaf day. The one person that can really help her is Emmett. Which wouldn’t have been so bad if Emmett knew about Bae and Ty getting back together.

Daphne and her new boyfriend, Jace, are happy. They can’t help but continue to pleased with themselves after their diabolical plan from last week. Just when they’re happy they see Jeff. Daphne’s ex and Jace’s friend’s new fiancée. Jace figures out who is pretty quickly and then he figures he mess with him a little. Even though he claims he wasn’t being sadistic later on.

Emmett and Bae have figured a way to play a movie at the Deaf Day. In the meantime Bae and Emett see the movie and think it would be fun to watch. Unfortunately Ty comes in as their watching the kissing scene between the two. Awkward party of three.

Daphne may have realized Jace is too much to handle. Earlier they were insulted by a guy that had taken instant dislike to deaf people. The two are able to walk it off only to find the same guy’s wallet and jacket. Daphne is willing to make jokes but Jace wants to use the guy’s credit card to make donations. Yeah Daphne stops laughing after that.

After convincing Regina to go with them for moral support, Nicki flees before she can meet her father’s killer. Toby decided to stay and talk to the man. In doing so he finds out that Nicki’s dad was so innocent. He was simply a drug dealer that was getting ripped off.

Toby doesn’t tell Nicki what he found out. He’s smart enough to know it would only hurt her. Still he does tell Regina.

Jace appeared to have moved on but not fully. He did tell his friend about Jeff. He felt his friend should know her boyfriend of several years had an affair with a teenage girl. Daphne is angry with him and somehow he finds a way to excuse himself.
It started out as such a good day. Bae follows Ty back to base and guess what she found out. He’s redeploying and he wasn’t going to tell her. She confronts him and he admits that he was scared. The last time he was deployed she dropped him for Emmett.

Kathryn does go to Jon’s dad. Grandpa Kennish is immediately worried after seeing Kathryn. He thinks Jon died. Well what else was he supposed to think? Jon had a heart attack and he never even told him. Kathryn is able to get through to a guy with very same temper as her husband and she brings him home. Jon sees his dad and there isn’t yelling or any proof to show that this rare. They won’t reveal that much emotion especially to or in front of each other.

Travis finally gets some good luck. He asked out Mary Beth and she said yes.
Ty comes back to the park. He’s sorry and he tells Bae he loves her. What she says next is pretty much going to haunt them. How are they’re going to do this? He’s always going to be leaving and possibly not returning.