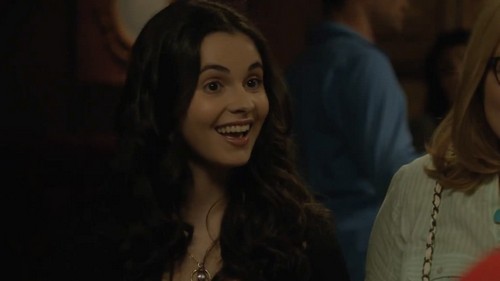 SWITCHED AT BIRTH returns to the ABC Family tonight with a new episode called, “The Merrymakers.” On tonight’s show an altered living arrangement has Angelo and Regina reexamining things. Did you watch last week’s episode? If you missed it we have a full and detailed recap here for you enjoyment.

On last week’s episode John continued to find ways to pay back Regina for saving his life, and Ty and Bay went camping.  Meanwhile, Daphne’s frustration with Jace came to a head when Parker shared some upsetting news. Nikki confronted her mom (guest star Joey Lauren Adams, “Chasing Amy”) about her dad’s history.

On tonight’s show Bay and Daphne host a bachelorette party for Nikki. Meanwhile, Toby’s bachelor party goes off course because of Simone; Jennice makes some surprising requests for the wedding; and an altered living arrangement has Angelo and Regina reexamining things.

For months they’ve been leading up to it but now it’s finally come true. Angelo got his daughter back. He knew and saw for himself how the baby was doing but he really wanted to raise at least one of his children. Bae is happy for Angelo yet at the same time she knows space is going to be tight so she’s moving back home.

However it wasn’t all about space. She isn’t home for more than day before she asks her dad for a favor. She wants him to get Ty off of redeployment. He tries to reason with her about Ty signing up along with hundreds to redeploy but all she can hear is that he doesn’t want her and Ty together. Dramatic much?

Kathryn warns John though that this time Bae is going to Ty leaving harder than the last. She lets him know about her suspicions i.e. Bae and Ty having sex. Just the thing a dad would like to hear. Its right up there with Daphne quitting on him. She says it because she broke up with Jace when in actuality Senator a**hole has continued threatening her. What can she do? She can’t stop the texts now that she’s no longer with Jace and she couldn’t convince to believe her innocent even if she tried.

Top it all off Toby’s wedding approaches. His bride-to-be is still spinning in and out of control and his future mother-in-law is taking over the wedding. Not in the helpful way but in let’s spend Jon and Kathryn’s money on the most expensive thing. She honestly wants the wedding to be everything her daughter and Toby never wanted. She thinks that’s the way to get Nikki to forgive her about lying for so many years.

So no, the wedding does not get off on the right foot. On the way to his bachelor party, Toby gets a text from Simone. She wanted him to know she had chlamydia. He finds this out while he was in the limo with Emmett, his best man and another guy that has slept with Simone. And they were so close in burying the hatchet.

Meanwhile Nikki is getting drunk. Guess her faith has weakened more than anyone thought. In a moment of stupidity Daphne told a drunken Nikki about her problems with both Jace and Senator Chip right before she leaves Nikki alone. Of course Nikki is going to drunken call him. Lucky for her he didn’t answer but she still left a voicemail. As this is happening the other of the bachelorette party were doing their best to fulfillll one of the dares. Bae and Mary-Beth track down Travis for Mary-Beth to kiss him.

Too bad though he was trying to entertain the stripper because Toby and Emmett had sneaked off to get tested otherwise Mary-Beth wouldn’t think tall skinner stripper was his type. Bae tries to get Mary-Beth waning confidence to return still the girl is humiliated. She hits out at Bae and begins ripping into her over telling Ty to stay home. Someone was man enough to finally tell Bae she was acting selfish Nikki sobers up enough to help Daphne break into the Senator’s office. They erase Nikki message, after getting help from a janitor, and Nikki is able to take a valuable lesson from this. Even though she’s mad about her dad being a drug dealer she still would have wanted him there for her wedding.

Toby found out he won’t get his results until after the wedding. He’s scared it would ruin his wedding but he has no choice. He tells Nikki and she understands. The alcohol must have truly left her system by then. The wedding has survived past some hurdles. And her mother remains one of them. Once she knew Kathryn had found out and was very receptive she let loose another bombshell. She doesn’t think the kids should get married. They’re too young. On one hand thank god Kathryn has an ally and on the other Nikki won’t be taking advice from her mother anytime soon.

Angelo has his daughter but she shouldn’t depend on Regina sticking around. Bae has Ty but not for much longer. The only people happy are Nikki, Toby, Travis, and Mary-Beth. Travis found her brother’s dog tags and as reward she’s willing to overlook his close dancing with a stripper. If she’s happy why complain.