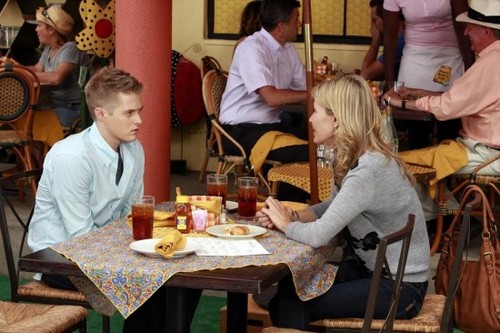 SWITCHED AT BIRTH returns to the ABC Family tonight with a new episode called, “What Goes Up Must Come Down.” On tonight’s show Daphne worries that Senator Coto is on to her.   Did you watch last week’s episode? If you missed it we have a full and detailed recap here for you enjoyment.

On last week’s episode Bay plans a Deaf Day at Maui, Kansas, and Daphne ran into Chef Jeff.  When business at Maui, Kansas started to slow, Bay coordinated a Deaf Day and worked with Emmett to organize a special screening of “Deafenstein.”  Daphne was shocked at what she discovered when she ran into Chef Jeff (guest star Justin Bruening, “Grey’s Anatomy”), and John brought some business to Regina.  Meanwhile, Toby tried to help Nikki (guest star Cassi Thomson, “Big Love”) cope with a family tragedy from her past.

On tonight’s show John continues to find ways to pay back Regina for saving his life, and Ty and Bay go camping.  Meanwhile, Daphne’s frustration with Jace comes to a head when Parker shares some upsetting news. Nikki confronts her mom (guest star Joey Lauren Adams, “Chasing Amy”) about her dad’s history.

Senator Koto is on the war path and Daphne is doing her best to sidestep her friend’s questions but in trying to staying clean she’s also kind of dropped Jace. She says she needs to think but the more people congratulate for changing the senator’s mind the guiltier she feels.

Meanwhile John is still bending backwards to try and show his appreciation to Regina for saving his life. It’s becoming a little embarrassing however will he or better yet can he forgive her if he ever finds out she let Bae go on an overnight camping trip. Then again Regina was smart enough to set up an alibi for herself with Bae beforehand.

Kathryn takes pity on Daphne although she doesn’t know what caused Daphne’s anxiety. They take a spa day. The spa is going fantastic when Daphne gets introduced to Senator Koto’s wife, Diana. She immediately excuses herself leaving Kathryn to deal with a nervous Diana. Diana is worried her husband is having another affair so she asks Kathryn to ask Daphne about any interns.

Bae’s dream of romantic camping doesn’t go the way she planned either. For one Ty is being pushy. No not about sex. He’s actually trying to push into rock climbing which Bae, the artist, doesn’t take too kindly to. She does it under sufferance and honestly likes it up on top that is until she has to go down.

Ty tells her to jump and she wants to simply stay up there. When she does go down, it’s not smoothly. She crashes to the ground only to find out it was a test. Ty tested her to see what she was made of seeing as he’ll soon deploy. But what’s really behind it is the whole Emmett Question. He’s worried she’s going to cheat.

Emmett on the hand is more worried about his dad than he is Bae. His dad’s cochlear implant is getting turned on and he’s still coming to terms with it. The final process goes smoothly but Emmett is lucky to have his mom’s support as he watches his dad’s excitement at being able to hear.

Regina’s boss finds out about her secret marriage. Accidentally from John of all people. Luckily she’s not angry and even offers Regina a full time job.

Daphne gave the game away. Her nervousness in her meeting with Koto gave her away. He in turn goes as far as to subtly threaten her. Jace is the one to catch her frantic exit. He still believes he can blackmail the senator in changing his votes and Daphne just wants out. She breaks up with Jace and now that she’s no longer his girlfriend, Jace continues to try and manipulate Koto.

Bae comes back to campsite after taking a walk for two hours. She and Ty call a truce. Anyway she twisted her ankle and after a brief trip to the E.R., Ty is willing to compromise. Earlier Bae wanted him to look into ways to get out of deployment but he refused. Now, for her, he’ll go to John.

In the midst of the hook ups and break ups there is Toby. The sweet Toby is pushing ahead with his marriage while she adjusts to her dad’s past. As if that was a good idea. Nickki is pretty messed up right now. Will she be able to go through with the wedding?